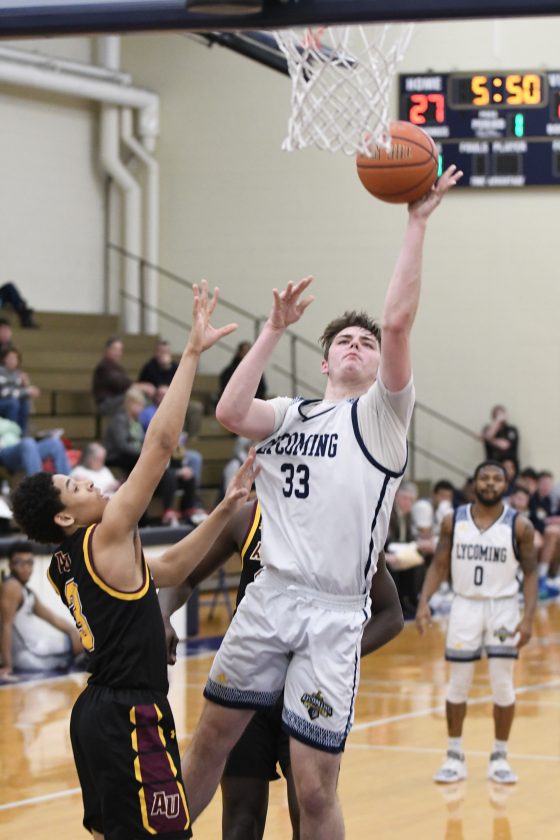 Standing outside of the locker room Saturday afternoon following a rout of Stevenson, Lycoming coach Mike McGarvey had no idea who the Warriors would be playing in the men’s MAC Commonwealth playoffs Monday night.

The Warriors did their job and got the win, but other factors from a few teams still needed to play out to determine if Lycoming was home or away. Regardless, McGarvey knew that no matter who the opponent was, the Warriors were still playing and that’s all that matters.

“That’s it. We’re alive and we’re in the playoffs and we have a chance to compete for a championship and what a great reward for the regular season for our team to experience that,” McGarvey said. “We just need to play well and continue to take the next step in our process for the season.”

The Warriors host fifth-seeded Hood tonight at 7 p.m. in the MAC Commonwealth playoffs. Lycoming swept both regular-season meetings with the Blazers. The Warriors won the Jan. 11 matchup on the road, 67-66, and then again on Feb. 1, 93-87.

Lycoming has a young team and regularly start two freshmen in Mo Terry and Dyson Harward, but the lack of experience in college games hasn’t hindered Lycoming’s success. The Warriors enter today’s postseason 17-8 overall and 10-6 in the conference.

As for offensive production? The Warriors spread the ball around routinely and have numerous players that can add to the stat sheet.

Darius Dangerfield leads the team with a 13.4 points per game average and Harward is second on the team with 13.2 Add in Mo Terry (11.9) and Matt Ilodigwe (8.9) and teams can’t just focus in on one player.

Harward also has been huge defensively, as he has a conference-high 62 blocked shots.

All that added up makes Lycoming dangerous and for Dangerfield, he sees the Warriors as the best team in the MAC.

“I got all the faith in us and I think we’re the best team in the conference, personally,” Dangerfield said. “I think if we go out and do what we’re supposed to do and just play hard, we’ll be fine.

“It’s just another game to us. We feel like we worked hard enough to get here. So now we got to prove to everybody that we’re good enough to be here. We definitely got the talent, we got the work ethic. I think we deserve to be here and I think we’re going to win because we know what we’re supposed to do.”

“We’re just going to stay focused and do everything in preparation that we need to get the end result that we want,” Hollis said.

And that end result is a championship.

A LOOK AT THE MATCHUP

Lycoming’s season: The Warriors have put together a solid season, going 17-8 overall and 10-6 in the MAC Commonwealth to lock up the fourth seed in the playoffs. Lycoming rolled past Stevenson in the regular-season finale, 90-65, to end the year on a high note after falling at Albright the week prior, 75-57. The Warriors hadn’t lost consecutive games all season long. Lycoming also saw a six-win improvement on last year’s record. The Warriors are looking to get back to the MAC Commonwealth Championship game for the first time since 2016-17 when they beat Lebanon Valley and Albright to advance to the NCAA Division III championships.

Lycoming player to watch — Dyson Harward: There’s multiple players you can pick for the player to watch, but Dyson Harward has been solid as a freshman this year in the last few games. He leads the conference in blocked shots with 62, which is more than double the second-leading player (Stevenson’s Bo Wesley, 30). Not to mention he’s averaging 13.2 points per game and 7.8 rebounds per game.

Hood’s season: The Blazers closed out the regular season with back-to-back wins, beating both Stevenson (93-73) and Widener (92-63) to help secure a postseason berth. The Blazers have the ability to put up points as well, as they have scored at least 90 in a game six times this season and are averaging 82.4 per game. Hood is looking to win its first MAC Commonwealth playoff game since 2013-14. Since then, Hood has appeared just twice in the MAC Commonwealth playoffs, once in 2014-15 and then last year.

Hood player to watch — Mason Wang: Wang is having an enormous season for the Blazers this year. He’s played in 25 games and is averaging a team-high 24.4 points per game and is the only Hood player to average more than 20 points. He also has a team-high 38 steals and averages 4.8 rebounds per game. Expect Wang to be the go-to player for Hood’s offense.