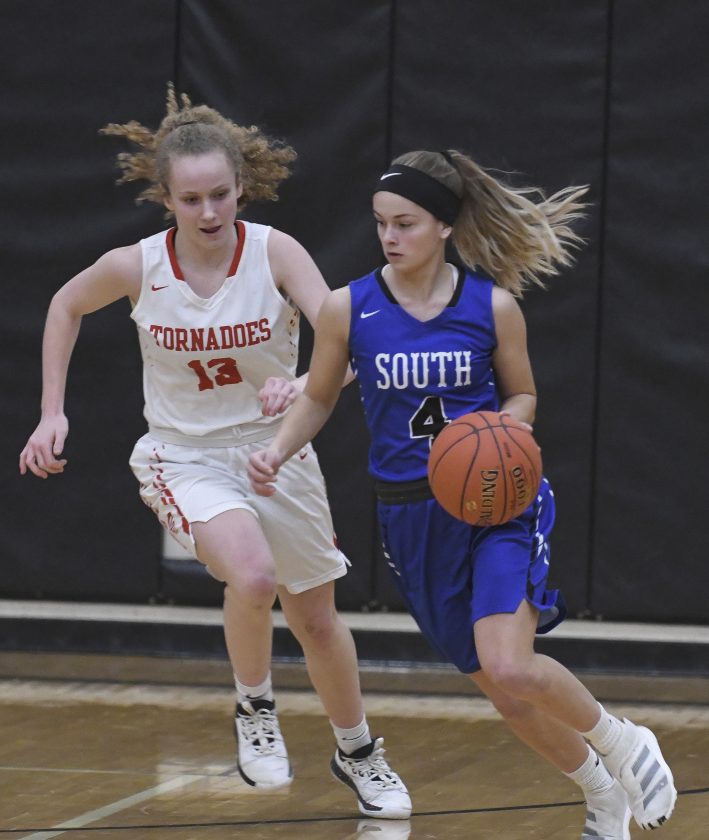 The emotions on the face of Rachel Stahl said it all. She was not pleased with the silver medal around her neck because she played with the intensity of a gold-medal performance trying everything she could to slow down the inside attack of Danni Rae Renno and Alyssa Reisinger.

South Williamsport got off to a slow start that Mount Carmel took full advantage of to claim the District 4 Class AA championship, 51-35, Thursday night inside Milton’s gym.

With Stahl picking up two quick fouls in the first quarter, Mount Carmel utilized the size difference of Renno and Reisinger. The duo led the Red Tornadoes to the title with 16 and 15 points, respectively. Both of the Mount Carmel bigs did a lot of their damage when they got the size mismatch inside when Stahl was out of the game.

“I know she’s a good player so I tried everything I could to play hard, box her out and not let her get easy shots or rebounds event though I was giving up a good four inches,” Stahl said. “I got into foul trouble early and that’s what put us behind and we just couldn’t come back. That’s what upsets me the most.”

“We knew they were going to target our smaller players, so we wanted to double up on Renno and Reisinger. I thought we did a good job of that tonight. Their first attempts weren’t falling right away, but then the rebounding gave them extra chances,” South Williamsport coach Justin Marnon said. “Rachel was very prepared for the game, she put everything out there and it’s only going to make Rachel better. I was really proud of the way she played tonight.”

Mount Carmel lead for the entire 32 minutes, South stumbled from the beginning with costly turnovers around the half court line, a 10-second violation, a back-court lapse, and two steals lead to quick turnovers for the Red Tornadoes and a 28-12 lead at halftime.

“(Mount Carmel) came out and played with intensity from the start. I think our girls did a good job of settling down and played as good as they could with a championship-type effort,” Marnon said.

With a never-quit attitude, the Mounties got out to a 9-2 run through the third period but Mt. Carmel continued to hold a double-digit lead through the second half.

“It definitely wasn’t lack of effort, it was just their size got to us tonight,” Marnon said.

With a state tournament berth already clinched, South Williamsport is ready to get back to prepare for the first round. The Mounties are not satisfied with the feeling of defeat, but know there is still more games to play.

“We need to punch first instead of digging ourselves out of the whole we need to put the pressure on the other team to play from behind,” Haley Neidig said after leading the offensive production as the only Mountie in double figures with 13 points.