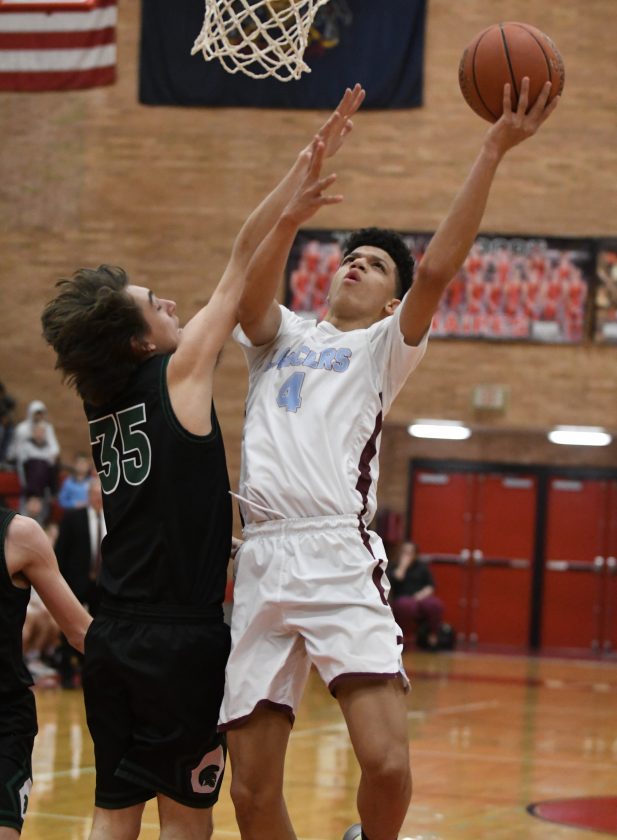 Saraj Ali so often provides the little things that do not show up in a boxscore, but which often can be the difference between winning and losing.

Tuesday night at Williamsport, Ali did all the big thing, too. Ali was a difference-maker on both ends and the sophomore playing one of his best high school games helped Loyalsock reach another district championship game.

Ali scored 13 points, grabbed five rebounds, blocked five shots, made three steals and added three assists as Loyalsock defeated rival Hughesville, 61-46, in the District 4 Class AAA semifinals while earning a spot in the final against Central Columbia. Eli Gair scored a career-high 15 points and five players provided at least eight as Loyalsock (25-1) earned its way into a third straight final. The Lancers will play either Friday or Saturday at a time and place to be determined.

“The past two weeks I was drained a little bit and my coach told me (Monday) to bring energy,” Ali said. “He said to bring the energy and not worry about the scoreboard. I do some things that won’t show up on the stat sheet, but I do those things for my teammates. I do take pride in that because I don’t need the credit. I just want to win.”

Ali has helped Loyalsock win a lot this season. He is one of four new starters who has helped the Lancers earn an opportunity to defend last year’s district crown, and he was outstanding in last night’s contest between programs which have won 15 district championships since 2001.

Hughesville (17-7) was denied a shot at winning its first district title since 2017, but still has quite an opportunity coming this weekend. The Spartans play Warrior Run for third place and the winner advances to the state tournament.

“Getting to states out of this bracket is a legitimate accomplishment. It’s something you should never take lightly and you should always be proud of. We’re proud of the eight times we’ve been there and we want to go a ninth time,” Hughesville coach Nick Tagliaferri said. “We’re upset that we didn’t win the whole thing, but we’re not going to let this get in our way (today) at practice. I’ve seen that happen before and that’s something which is a real thing. We’re legitimately annoyed with how we played and we’ll get back at it.”

Loyalsock forced 23 turnovers and Ali ignited a defense which made rapid improvement four nights after allowing 87 points in a quarterfinal win against North Penn-Mansfield. The 6-foot-3 sophomore was an eraser in the paint, often blocking shots or denying shots after Hughesville penetrated or worked the ball inside. He also helped Loyalsock drop the hammer in the fourth quarter when Hughesville kept trying to rally.

Ali displayed his whole arsenal in the fourth, having a hand in 12 of the team’s 16 points, making all three of his shots and adding three assists. Ali twice answered scores with baskets and once with an assist after Hughesville pulled within 11. His steal and dish to Gair made it a 15-point game, and his assist to Rees Watkins all but clinched the game, giving Loyalsock its biggest lead, 57-40.

“Saraj is in the right place at the right time,” Loyalsock coach Ron Insinger said. “He just has terrific basketball sense and great instincts and great anticipation. He is half a step quicker to the ball than most guys are.”

Loyalsock did that by not just denying points, but also by creating them. The Lancers sped up Hughesville at times and built an early eight-point lead by forcing turnovers on the Spartans’ first five possessions. Hughesville turned the ball over nine times during that opening quarter, but weathered the storm and pulled within 25-21 at halftime. The second half, though, started like a replay of the first.

Loyalsock forced six third-quarter turnovers and scored seven points in the first 90 seconds while building an 11-point advantage. That lead ballooned to 16 at one point before Nick Trevouledes’ buzzer-beating 3-pointer made it 45-34 entering the fourth. The Spartans scored three quick baskets to open the fourth, but Loyalsock answered on its ensuing possession each time and allowed just six points over the game’s final six minutes.

“For a couple weeks now everyone has been telling these kids that they don’t play a lick of defense and I think they proved tonight that they can play so I was really pleased with the defensive end,” Insinger said. “We knew it was going to be a dogfight. We knew we were going against a well-coached, well-trained team. It’s a great rivalry and it brings out the best in both of us.”

Hughesville stayed in the game during the first half with some strong defense. Justus Leighow provided stellar defense all night and the Spartans limited Loyalsock to 16 points over the first half’s final 12 minutes. The turnovers, however, were the difference-maker. Every time Loyalsock surged, it creating turnovers loomed large and also played a role in it making 17 of 31 second-half shots.

“We defended well enough to win, we just gave a good team the ball way too many times,” Tagliaferri said. “That really was the story of the game.”

Every Hughesville player was participating in his first district semifinal so the experience could help it moving both into the consolation game and into the future. Trevouledes scored a team-high 11 points and Blake Sherwood (9 points, 12 rebounds) finished a point shy of recording a double-double. Freshman Carter Cowburn added seven rebounds and freshman Dylan Bieber drained two 3-pointers.