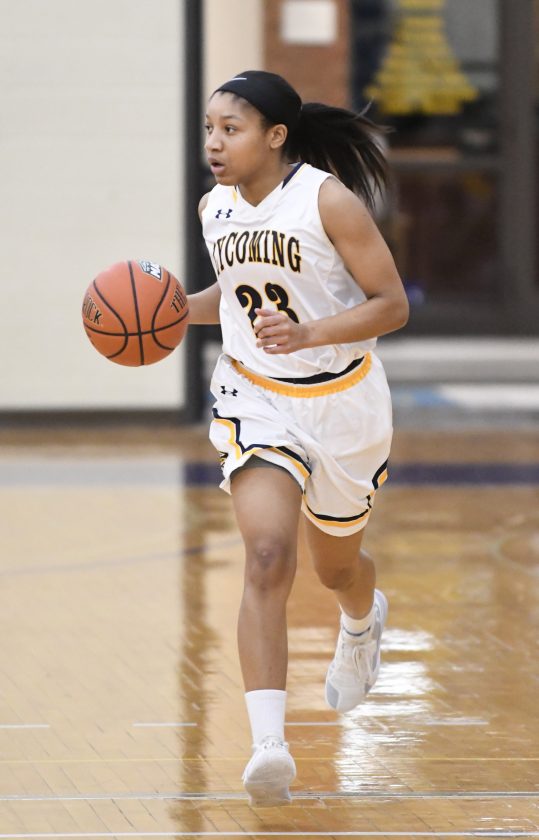 MARK NANCE/Sun-Gazette Akilah McFadden in addition to Morgan Mader, Kayla Kline, Courtney Treude and Megan Helminiak tied the program record for most wins by a senior class with 65.

Prior to Saturday’s regular-season finale against Stevenson, the Lycoming women’s basketball team honored its five senior players in Morgan Mader, Akilah McFadden, Kayla Kline, Courtney Treude and Megan Helminiak. While every college — and even high school — honors seniors on a given day during the season, Saturday’s meant just a little bit more for the five Lycoming players honored.

This group of seniors has etched their names into the Lycoming history books and has helped re-establish the program during their four-year careers.

The Warriors’ seniors have won 15 games in a season for the fourth consecutive year, just the second class to do so, joining the Class of 1998.

“They have brought our program such a long way. To reach all the milestones that they have individually and collectively, I can’t say enough good things about them,” Lycoming coach Christen Ditzler said. “From Day 1, they came in here and changed the complexion of the program and certainly, hopefully, we continue to build on the success that they gave us.”

In addition to those four straight years with at least 15 wins, the most impressive stat perhaps is how much winning the Warriors have done as a group. The five seniors beat Alvernia on Wednesday to earn their 65th victory as a group. Those 65 wins tied the program record and Lycoming has been postseason bound all four years under Mader, Kline, McFadden, Helminiak and Treude.

“We came in strong, tried to change the program and ended up tying it (wins record). That’s a pretty good thing,” said McFadden, a Lewisburg grad. “All the seniors worked hard, so we just wanted to come in and make a difference.”

Prior to this senior class, Lycoming didn’t have much postseason success this century. Lycoming made the playoffs in 2013, 2014 and 2016, but each year saw an early first-round exit. It wasn’t until this group of seniors were freshmen in 2016-17 that the program won its first postseason came this century by beating Lebanon Valley in the first round.

Last year, the Warriors lost to Messiah in the MAC Commonwealth title game, which was the first time in 29 years the Warriors appeared in a conference championship.

“I couldn’t have asked for a more supportive and determined team. The five seniors, along with the rest of the team, have accomplished so much together,” Mader said. “We’re basically a second family on and off the court and I couldn’t imagine a better season with a better team.”

The seniors have all brought talent to the team. Mader is money from 3-point range, leading the team with an impressive 73 and hitting 39% from behind the arc. Before her injury sidelined her in the second half of the season, Kline was averaging 13.1 points per game and 7.9 rebounds. And McFadden averages 11.9 and 5.2, respectively, this year and leads the team with 90 assists and 59 steals.

Helminiak has appeared in 15 games this year for the Warriors and sees 7.7 minutes per game. And when Treude appeared in games, Lycoming was 24-6.

The milestones are nice and the individual accolades are something the players are glad they have, but the goal for the seniors is to keep playing and win a championship.

“We accomplished a lot,” McFadden said. “I know we’ve always worked hard. We came in ready to fight for anything. That’s our goal to keep making it as far as we can and keep working hard and the little things come along with it.”

The senior class will look to get at least one more win as Lycoming travels to Stevenson on Monday for the first round of the MAC Commonwealth playoffs.