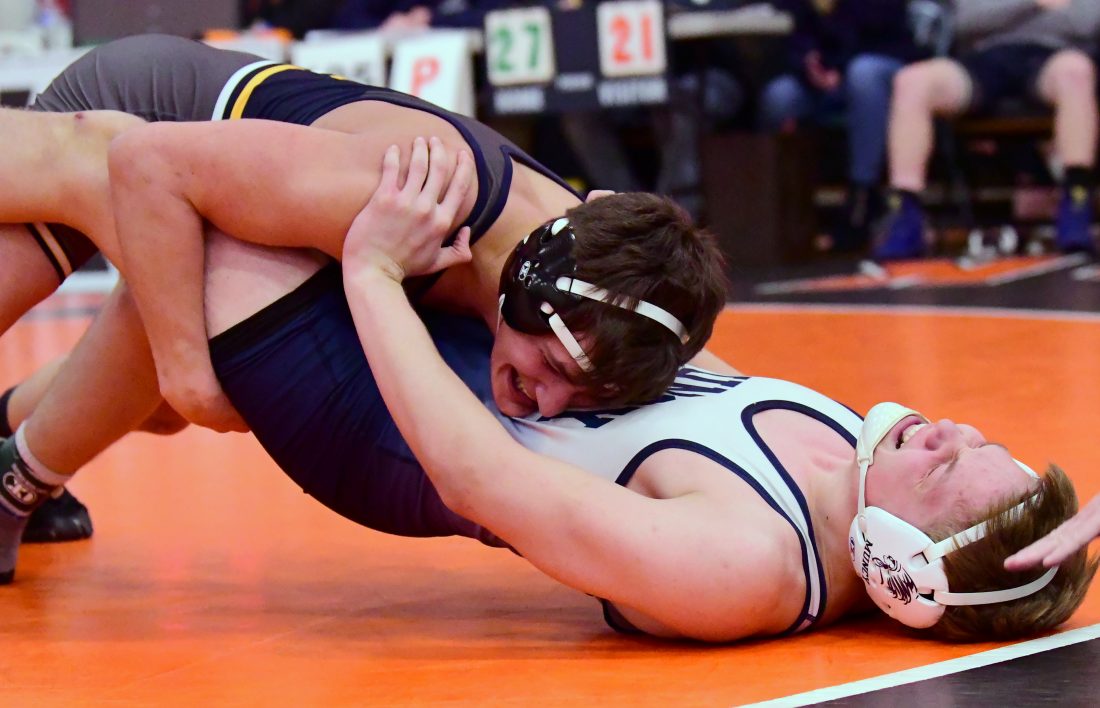 FRANK DIMON/Sun-Gazette Correspondent Montoursville’s Gavin Livermore earns back points against Muncy’s Tristan Ditzler during their 195-pound bout in the consolation final of the District 4 Duals at Milton on Saturday.

MILTON — The thoughts flowed through Jackson Watkins’ mind like water over Niagara Falls. Those thoughts turned to overwhelming nerves which left the Montoursville sophomore shaking as he prepared to wrestle a varsity match for the first time since the first day of the season.

Warriors coach Matt Yonkin told the 106-pounder to be aggressive. Watkins’ mind cleared of all but one thought: Get Muncy’s Jaden Boore to the mat as quickly as possible.

In a tied match to decide District 4’s third representative to next week’s state tournament, Montoursville and Muncy sent junior varsity wrestlers to the middle of the mat at Milton High School to likely decide the third-place match at the District 4 Duals on Saturday. Watkins found a way to channel his nervous energy into an explosion of offense.

His takedown and fall in just 12 seconds gave Montoursville a six-point lead. No. 1-ranked 106-pounder Branden Wentzel then bumped up a weight class and sacrificed a loss on his resume to hold Muncy’s seventh-ranked Scott Johnson to a decision and give Montoursville a 39-36 win. The Warriors finished third in the district tournament, earning a spot in Monday’s pigtail round of the PIAA Team Wrestling Championships. They’ll travel to Boiling Springs to face the District 3 runner-up Bubblers at 7 p.m. Monday with the winner earning a spot in Hershey for the state tournament on Thursday.

Yonkin understood, even in the moment, there was an absurdity to trusting Montoursville’s dual-meet season to a wrestler who wrestled this year for the first time since his elementary school days. But he was confident Watkins could handle the moment against Boore, who himself had stepped on a varsity wrestling mat only twice this season, and both were to accept forfeits.

“It’s a little nerve-wracking when you’re handing over your entire season to an untested sophomore,” Yonkin said. “But the reality is (Boore) is new to the sport as well, and I felt a little more confident in our kid.”

With Muncy and Montoursville tied 33-33 with only two bouts to go, Watkins took an immediate double-leg shot and scored the takedown. But in the process he also trapped Boore on his back and scored the fall in just 12 seconds.

Watkins rose to his feet and looked toward a Montoursville bench which was going absolutely berserk and flexed both his arms ever so slightly. The nerves were gone. If he was shaking, it was out of pure elation. And he was greeted by his teammates as if he had just won a state championship.

“I was so excited because I’ve been working the whole entire season on this and I just wanted a chance to wrestle for my team,” Watkins said. “I just wanted to win for my team because I didn’t want to let them down.”

Just four bouts earlier, Muncy had been in a position where everything it needed to happen to beat the Warriors had happened. By winning the pre-match coin flip, the Indians were able to dictate a couple key matchups.

Muncy held a 27-6 lead through the first six bouts. And in winning the toss, the Indians thought it could minimize some of the damage through Montoursville’s brutal upper weights. Seventh-ranked Ethan Gush gave up just a decision to fifth-ranked Dylan Bennett despite bumping up a weight class. And in turn, Muncy was able to move Tristan Ditzler up a weight class away from Bennett and into a toss-up match against Gavin Livermore at 195.

For the better part of 4 minutes, that move worked perfectly. Ditzler built a 9-1 lead and likely would have scored a fall if not for the first-period buzzer interrupting his pinning combination on the edge of the circle. But one motion, Livermore changed everything.

Late in the second period, down 9-2, Livermore hit Ditzler with a blast double which would have made Jordan Burroughs’ jaw drop. With a cringe-inducing thud, Livermore dropped Ditzler hard to his back and held him there for a five count and three back points. The five-point move cut Livermore’s deficit to 9-7 and forced Ditzler to take injury time to get back his wind.

That one move filled Livermore with confidence and inspired a worried Montoursville bench. Livermore, who was just 9-9 entering that bout, hit another big move midway through the third period and finished it for a fall. And all of a sudden, instead of staring at a desperate situation with a double-digit deficit and only four bouts left, Montoursville had tied the dual and put the control back in its own hands if it could just get a fall from Cameron Wood at 220, which it did, and Perkins’ first varsity victory at 106.

“I was thinking I was in trouble about the whole match,” Livermore said. “But my teammates put me back in the right mindset. And that one takedown got all my confidence back and I was ready to go.”

“We’ve been preaching that every bout counts, every point counts. And for us, with our lineup, it does,” Muncy coach Royce Eyer said. “You can’t have a letdown match, and unfortunately for us, we did. We’ve been battling injury and sickness all year and it just wasn’t meant to be.”

Muncy nearly pulled off an improbable run through the consolation bracket after opening the day with a lopsided loss to Southern Columbia. It beat Milton, 40-39, on criteria in its first consolation match. Cael Hembury, who was quite sick all day, recorded a decisive fall against Canton in the consolation semifinals for a 42-33 win.

But despite the great start against Montoursville, it wasn’t able to close out the dual. The Indians failed to qualify for state duals for the first time since 2017. A Lycoming County team has never won the District 4 Class AA Duals since its inception in 1999.

Milton went 0-2 yesterday, losing to Montoursville and Muncy. Canton opened with a win over Benton before falling to Line Mountain in the semifinals and Montoursville in the consolation semifinals.

“I’m proud of these guys, they battled hard,” Eyer said. “It was a tough day and a long day and there were a lot of tough matches. We got a couple good, quality wins, but unfortunately we lost a few tough ones and close ones. But I was happy with the effort. One match here and one match there and maybe things are different.”

(Muncy wins on Criteria I, most first points scored, 16-8)