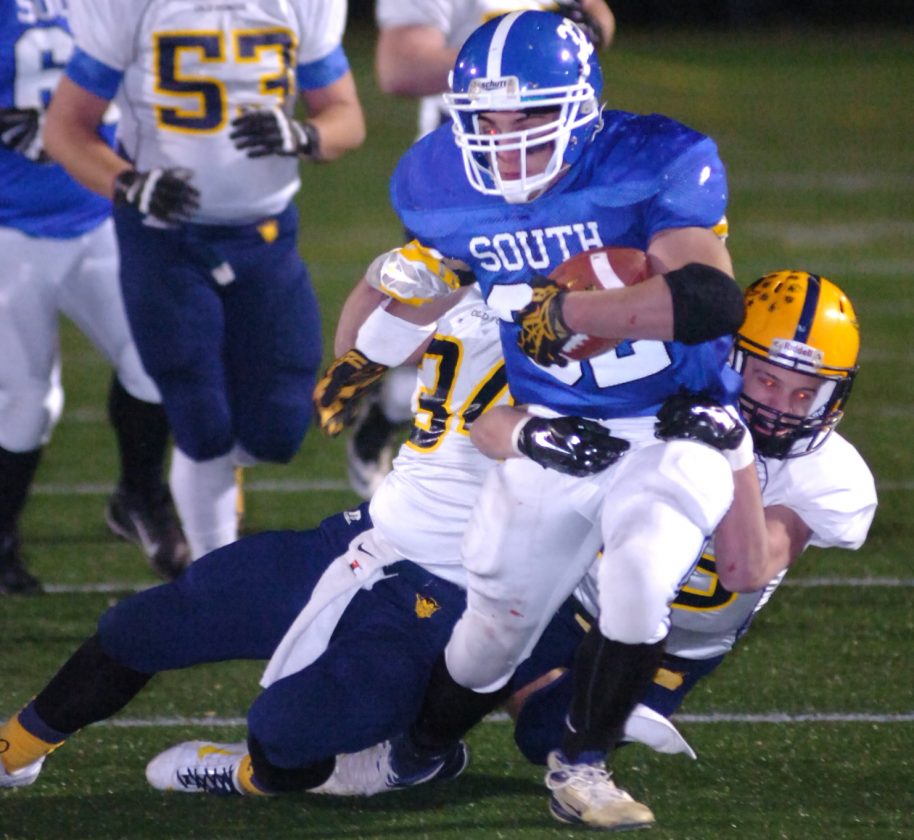 MARK NANCE/Sun-Gazette Dominick Bragalone and South cruised to the Class A state semis in 2014.

After reviving the program the previous two seasons, South Williamsport began and ended its 2014 season with heartbreaking losses. In between, it produced 13 of the most dominant weeks area football fans have ever witnessed.

South had knocked on District 4’s Class A door in 2012-13 and kicked it in with sledge-hammer strength in 2014. The Mounties scored a 2000’s area-record 737 points, beat opponents by a 29-point average, steamrolled their way to a district championship and reached the state semifinals. South had nearly every one of its 13 victims beaten by halftime and came as close as any area team since 2005 at reaching a state final, dropping a 28-21 Eastern Final decision to eventual champion Bishop Guilfoyle.

Many will remember this as the year of Dominick Bragalone. Who can blame them. The senior running back produced the second-best season in U.S. history, rushing for 4,717 yards and 63 touchdowns. Bragalone put together a remarkable scholastic career in just one season and went over 2,400 yards in the postseason alone.

Still, as other-worldly as Bragalone was, this was a complete team. The offensive line may been Class A’s best, five players earned all-state honors and the defense routinely stymied opponents before taking a seat and watching most of the second half from the sideline. South fell one game shy of reaching the state final that the 1993 and 97 teams did, but it certainly put together a compelling case when one discusses the best teams in program history.

Like 2010 Lewisburg, the No. 4-ranked team on this list, South rapidly turned its program around just a few years earlier and 2014 was the year all the pieces fit perfectly together. Coach Chris Eiswerth arrived in 2011, inheriting a program which had not recorded a winning season since 2004. The Mounties doubled their win total in his first year and made their breakthrough the next, going 10-2 and reaching their first district final since 1997. The Mounties duplicated that achievement in 2013 and their only four losses those two years came against juggernaut Southern Columbia. Southern moved up to Class AA in 2014, which was ironic in a way because this reporter firmly believes South would have defeated it had the two crossed paths again that November.

South returned a strong core from its 2013 team and expectations were high. The Mounties, though, dropped their season opener against rival Montoursville, 38-36. South scored six touchdowns and Montoursville five, but kicker Logan Wein was not yet on the team and the Mounties went 0 for 6 on extra point tries while Montoursville was 5 for 5 with a field goal.

The loss was painful but lit a fire and South started ambushing opponents, blanking Towanda, 42-0 the following week. The Mounties made a statement in Week 4 as Bragalone ran for 388 yards in a 34-26 win against eventual District 4 Class AA finalist Loyalsock. The Mounties also pounded AA playoff-bound Hughesville, 48-27 in Week 7 and won all their NTL-II games by mercy-rule margins while capturing a third straight league title.

Bragalone was special, but so was his offensive line. Cody Nelson and Sam Buck earned all-state honors and were joined by Anthony Caruso, future all-stater Connor Rutan, freshman Reilly Barnes and Rocco Bausinger. Future Columbia starting lineman Tyler Schonewolf was one of the best blocking tight ends in the state and especially lethal on South’s go-to play, the power toss. He also caught three touchdowns. Having Bragalone running behind a line that good was like giving Usain Bolt a 10-meter held start in the 100-meter dash. It almost seemed unfair at times.

Then there was John Peters. The senior fullback likely could have been a 1,000-yard back anywhere else but embraced his lead blocking role and many of Bragalone’s long touchdown runs started with a crushing Peters’ block. He also ran for 636 yards and 10 touchdowns with Boone adding 365 yards and 10 scores. South ripped off rushing yards like they were coming off an assembly line, producing 6,200.

Boone did not throw the ball often, but still produced 1,260 yards and a program-record 20 touchdowns. His favorite target was all-state receiver Riley Thomas, who caught 44 passes for 768 yards and 11 touchdowns, often playing his best in the biggest games. No wonder South averaged 490 yards and 49.1 points per game. It also topped 40 points in 12 of their 15 games, including 10 straight at one point.

All those players were defensive factors as well and the starters rarely allowed more than two touchdowns in a game during the 13-game winning streak. South forced 40 turnovers, Schonewolf dominated at defensive end, Peters earned all-state honors at linebacker and Bragalone intercepted five passes. Boone, Nate Koletar and Brock Jones all intercepted three passes and freshmen linebackers Gideon Green and Ashton Martin made big immediate impacts like Barnes did offensively.

All that explosiveness and power was too much for South’s district opponents. Canton had won four its last five games, but South mercy-ruled it early and defeated it, 55-24, in the semifinals. Only North Penn-Mansfield stood in South’s way of that elusive championship and as good as the Panthers were that year, going 9-3, they never had a chance.

South scored on its first two series, built a big halftime lead and cruised to a 54-14 win, giving the program its first district championship in 17 years. A senior-laden team could now bask under the glow of the Friday Night Lights, knowing it had brought the program so far, so fast.

“When we were freshmen, we were coming off an 8-0 eighth-grade season. We knew we had the kids and we just knew we had to keep putting the work in and keep everyone committed and everyone playing,” Schonewolf said after catching a 31-yard touchdown pass and making six tackles. “We knew we had something and we’re very happy to be here. It’s awesome to see all the hard work we put in pay off.”

That work continued paying big dividends during the state tournament. Facing an undefeated Old Forge team allowing fewer than 10 points per game, South dominated from start to finish in all facets, winning the first round game, 40-0 as Bragalone ran for 406 yards.

A week later, South played high-flying Disrict 11 champion Pius X. The Royals were South’s polar opposite and dominated through the air. They played well offensively against South but had no hope against South’s powerhouse offense. Bragalone ran for a state tournament-record 439 yards, Thomas made a ridiculous 44-yard touchdown catch and South pummeled Pius X, 69-41.

“The biggest thing coming in was reminding them of everything they’ve done up to this point. All those morning lifts and all the running and training in hot weather and coaxing the guys to do this and do that they and they did,” Eiswerth said afterward. “All these sacrifices they have made as a group kind of hit full circle tonight. They are a tremendous group of athletes and a tremendous group of kids.”

They showed that again in the Eastern Final against Bishop Guilfoyle, a game this reporter believes was the real state championship that year. Guilfoyle had outscored its opponents by 600 points while starting 14-0 and allowed just a staggering 4.4 points per game. South, though, went toe to toe with the Marauders in a heavyweight fight. Bragalone ran for 355 yards and South scored more points than any Guilfoyle opponent that season but the Marauders made a late crucial stop and won, 28-21.

If they played again the next week, maybe the outcome is different. But football is not a best-of-seven. Still, South left the field with no regrets, doing everything it possibly could all season and that night to produce something memorable. Although that journey ended short of a state championship, it produced memories that will last a lifetime.

And it might take another lifetime or so before anyone around here sees a team produce the numbers South did in 2014.

“We worked since last November after Thanksgiving in the weight room three days a week, working hard and to get this far is a great honor,” Koletar said after intercepting a pass and making seven tackles in South’s final game.

“It’s a credit to the whole team,” Eiswerth said. “We worked endlessly and I can’t say enough about the staff, the team and the things they do. It’s unbelievable.”