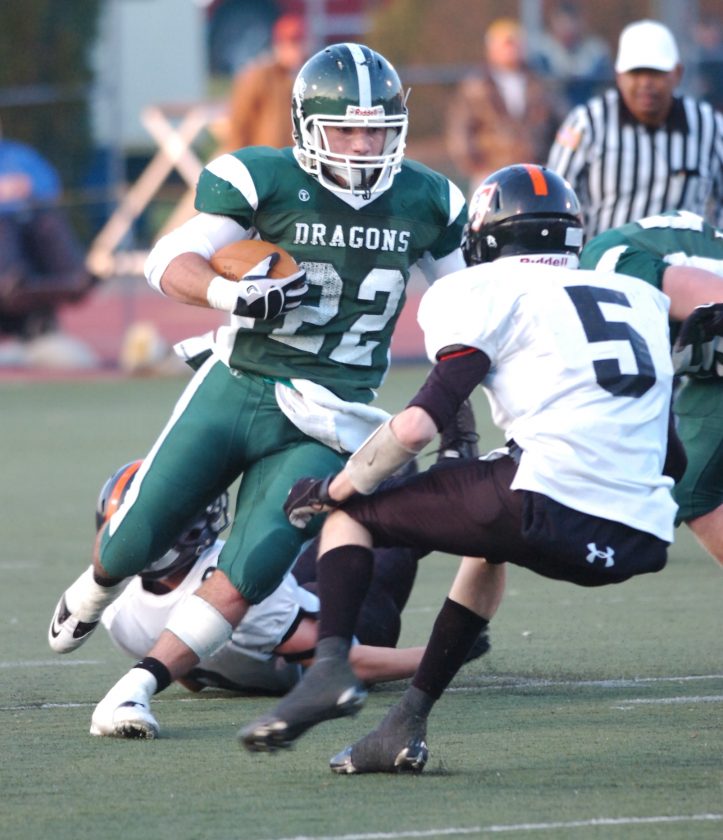 MARK NANCE/Sun-Gazette Nate Brown runs against Towanda during a playoff game with Lewisburg in 2010. The Green Dragons ended that season 14-1.

Only Southern Columbia features a longer District 4 playoff appearance streak than Lewisburg. The Green Dragons have reached districts 12 straight years. The streak started in 2008, but it is the 2010 team which every incoming Lewisburg squad is trying to emulate. That team set the standard, made history and capped one of the most impressive turnarounds in district history.

Lewisburg finished a victory shy of reaching the Class AA state final, winning the program’s first and only district championship. It started 14-0, beat a series of perennial heavyweights and dramatically altered the program’s complexion.

It all happened so fast, too. This was a program that began the 21st century as a laughingstock. Lewisburg went 10-60 over a seven-year period which ended in 2007. No Lewisburg team won more than three games during that time and twice the Dragons went winless. Included in that stretch was a 24-game losing streak. But things started changing when Lewisburg made a five-win improvement, finished 9-3 and won the program’s first district playoff game in 2008, coach Todd Tilford’s second year there. More success followed in 2009 as Lewisburg went 11-2 and reached its first district final.

And 2010 was the year when everything came together. It was in 2010 when Lewisburg repaid old debts, tied an area record for wins in a season and nearly turned the impossible dream into a reality, finishing as one of the state’s top four teams.

“We feel like we have a special group of kids,” Tilford said following the district championship win at Danville. “It’s not easy to win a title and to their credit they did what they had to do.”

They started doing so in emphatic fashion, opening the season with a 35-3 victory at Milton before blanking perennial power Mount Carmel, 20-0. That win should have opened a lot of eyes, but doubters remained as Lewisburg improved to 5-0.

That changed on October 1 when Lewisburg went to Catawissa and defeated Southern Columbia, 28-21. Southern has lost only three regular-season games since then, signifying how impressive that victory was. Nobody could ignore the Dragons anymore as they continued mowing through a tough schedule, battering Montoursville and defending district champion Loyalsock by 76 combined points, capturing the CSC-I championship and extending its regular-season winning streak to 16 games with a 10-0 finish.

At the heart of Lewisburg’s success was a suffocating defense which allowed just 12.8 points per game. The Dragons held 10 teams to 14 points or fewer and shutout two. The defensive line was one of the district’s strongest with players like Patrick Ostrowsky, Sean Charest and Josey Hendricks giving a dynamic set of linebackers the opportunities to seek out ball-carriers like missiles. Future Penn State linebacker Brandon Smith, then a sophomore, made 188 tackles, Nick Cozza 108 and Sun-Gazette Player of the Year Nate Brown 93. Brown and Smith also combined for 12 1/2 sacks. The secondary also was elite with Ryan Lopes, Nick Kifolo, Jared Laino and Robbie Gaines smothering receivers. Laino and Gaines combined for 10 interceptions.

The offensive line was as physical as its defense was punishing and paved the way for a running game which frequently overwhelmed the opposition. Brown and all-state running back Merle Moscarello each went over 1,300 yards with Brown scoring 26 touchdowns. Quarterback Cam Cassels did not throw a lot, but still produced 1,162 yards and 11 touchdowns. Lopes was a big-play threat and caught 31 passes for 505 yards and seven touchdowns as the offense averaged 31.3 points per game.

But while all that talent and toughness nearly helped Lewisburg scale the state summit, the Dragons nearly were one-and-done in the playoffs. The No. 2 seed, Lewisburg drew Bloomsburg and had the field’s toughest quarterfinal. All-state quarterback Blake Rankin led Bloomsburg on a late touchdown drive, making it a one-point game and coach Larry Sones went for the win. Smith made the play of his life at that point, breaking up the 2-point pass and preserving a 21-20 victory.

Lewisburg hosted undefeated Towanda the following week and hammered it, 39-14. That brought it face to face with undefeated Danville. It was a game both communities had been talking about all year and the crowd had packed Danville’s bleachers more than an hour before kickoff.

Danville outgained Lewisburg, 458-147, but the Dragons repeatedly made sure promising Ironmen drives ended in dead ends. Lewisburg forced six turnovers and Kifolo returned a kickoff 81 yards for a first-quarter touchdown. Kifolo also caught the go-ahead 15-yard second-quarter touchdown pass from Cassels following a Brown to Lopes 21-yard connection on a halfback pass. Gaines broke up two passes near and in the end zone midway through the fourth quarter and Laino clinched Lewisburg’s first district title when he intercepted a pass in the end zone in the closing seconds.

“This was the goal the whole season. From Day 1 this is what you’re working for,” Charest said following the game played in frigid temperatures. “It was a great game. It was a great game for the fans to watch. It was amazing out there. It was the best feeling you could ever have.”

Maybe it was because Danville had outgained it by 311 yards or because statewide high school football followers were slow to realize how good Lewisburg was, but the Dragons felt disrespected as they took the field eight days later in Hershey to play District 3 champion Trinity. It was the third straight week in which Lewisburg faced an undefeated team and the third straight week it prevailed.

The Dragons left no doubt, building a 28-0 halftime lead, forcing four more turnovers and winning, 31-21. Gaines returned an interception 99 yards for a touchdown, Moscarello ran for 125 yards and scored on a 66-yard run and Kifolo struck again, taking a Ryan Lopes pitch for a 63-yard touchdown on a perfectly-executed hook and ladder play.

“Everybody said we’d have a tough time winning this game,” Hendricks said afterward “We really tried hard and worked hard all week and proved them wrong.”

That was the story of Lewisburg’s entire season. Eventual state champion West Catholic, which featured players from three states, denied the Dragons a spot in the state final, scoring the final 14 points and winning, 21-7, back at Hershey a week later.

Still, this team’s legacy already was secure. Lewisburg came so far so fast and set a powerful example. These underdogs sure had some bite.