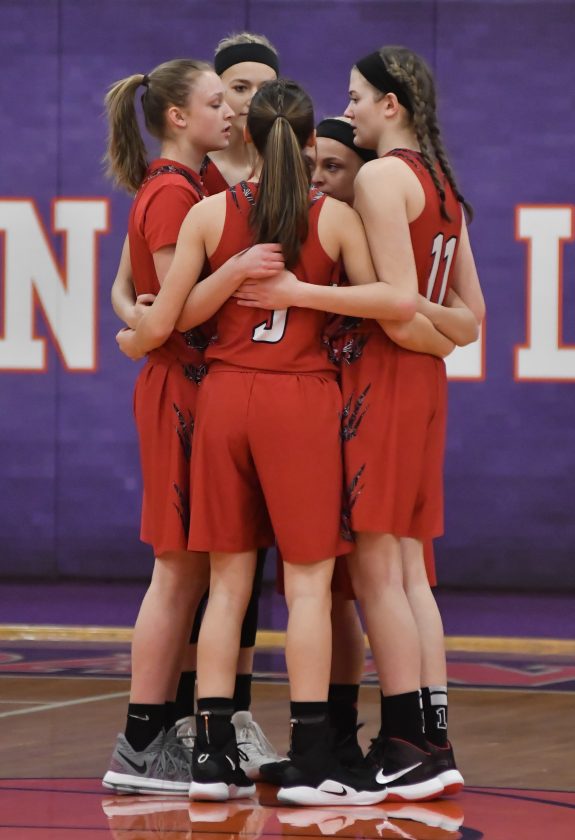 SUN-GAZETTE FILE Members of the Sullivan County girls basketball team huddle before a playoff game against Lourdes in 2019.

Only one Sullivan County team over the last four seasons has not reached 20 wins. How ironic then that the one which did not is the best of the impressive bunch. Sullivan County went 19-8 in 2019, but it played one of the more demanding schedules in program history, finished as District 4 Class A’s runner-up, gave an eventual state finalist one of its toughest playoff games, and again reached the second round of the state tournament.

Sullivan County had little history prior to 2017, but coaches Shannon Pietroski, Kurt Parrish and a dedicated group of players soon ushered in the best era in program history. The 2016 team reached districts for the first time since 2011 and won its first playoff game since 2010. It was 2017, however, which really provided the launching pad.

That year, the Griffins won a program-record 22 games, reached the district final and advanced to states for the first time. Sullivan matched that win total in 2018 and defeated Pottsville Nativity for the program’s first state playoff victory.

That success pushed Sullivan to beef up its non-conference schedule for 2019. The Griffins added teams like 5A Selinsgrove and 4A Bellefonte, in addition to playing 2017-18 District 4 Class AA finalist Hughesville and perennial power Lourdes. Sullivan lost games to those four teams by 23 combined points, falling to Bellefonte in double overtime. Playing those games, however, made Sullivan County better down the stretch as it captured a third straight Mid-Penn championship and reached another district final, this time riding a seven-game winning streak.

This was a well-rounded team which could do damage inside and outside. Forward Jessica King earned all-state honors for a second straight season, recording 15 double-doubles while averaging 12.2 points, an area-best 12.4 reboundds, 2.8 steals and 2 blocks per game. Senior guard Mykenzie Malacusky also was a back-to-back all-state selection and earned Mid-Penn Player of the Year after averaging 15.3 points, 3.6 assists and 3.2 steals per game. Malacuksy closed her scholastic career with 1,124 points and also was a vital cog in a defense that could squeeze the life from opponents.

The Griffins allowed just 35.8 points per game and Bethany Beinlich (9.5 ppg, 3 spg) was an area All-Defensive selection. Six-footer Alexis Randall used her speed and length to frequently disrupt opposing guards and King was an eraser inside. Sophomore Sophia Springman was another defensive factor and also started flourishing offensively in her first year starting as Sullivan County outscored opponents by a 21-point average.

All five starters were scoring threats and Sullivan was often as balanced as it was good. The Griffins pummeled their first two playoff opponents by 61 combined points before dropping a six-point heartbreaker in the final against eventual state finalist Lourdes.

“Our team really bonds well,” Beinlich said after that game. “We know how to talk to each other and keep each other encouraged.”

That was evident in the state tournament opener against Covenant Christian. Sullivan County made quick work of the Lions and dominated all aspects, cruising to a 65-30 win. It became just the second team to win a state tournament game and in doing so in such convincing fashion, this Sullivan County team made its claim as being the best in program history.

It was an emphatic performance delivered by a group of players who had just one focus.

“We’re definitely all unselfish. Whoever is out there, we will get the ball to them because we don’t care who is scoring,” said King, a future 1,000-point scorer and rebounder. “We just want to win. Winning is all that matters.”

Sullivan County gave defending state champion Jenkintown a battle in the second round but Jenkintown pulled away in the second half and won, 60-44. The loss did not diminish this team’s achievements. The Griffins kept their program trending upward and they won another Mid-Penn championship as well as 20 games this past season.

A program that once had little history sure has made a lot of history the past four seasons. That 2019 team kept enhancing that winning culture.

“It feels really good to have people not expecting anything, then coming out and showing them what we can do,” Beinlich said after the district final. “We’re a smaller school and don’t have as much to choose from, but we’re transforming how people think about us in basketball and soccer.”