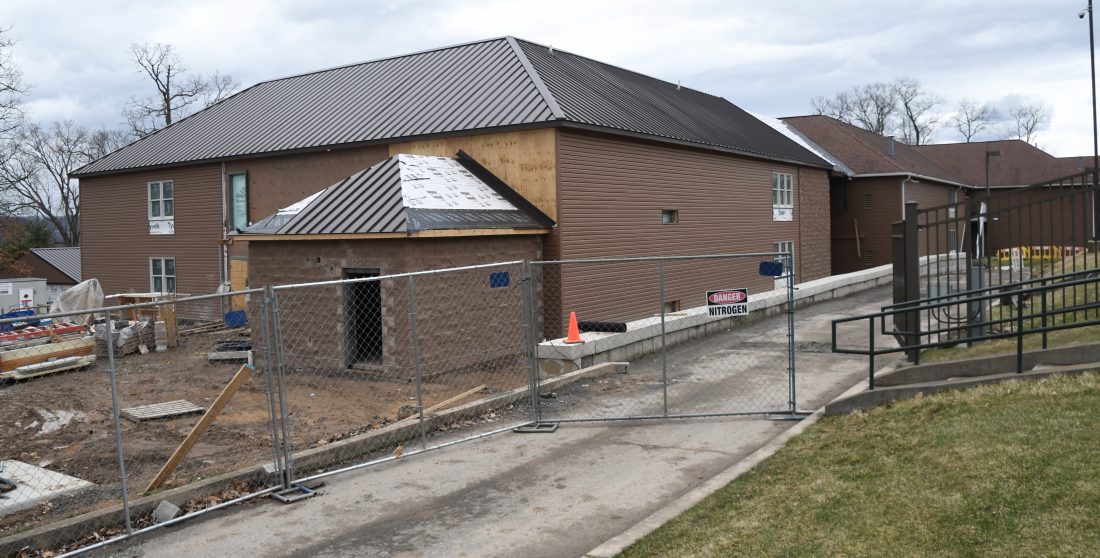 MARK NANCE/Sun-Gazette Little League International is constructing a new player dormitory in the Grove, part of a two-phase project of renovations and construction leading up to an expanded field of teams in 2021. Governor Tom Wolf’s halting of all non-life-sustaining businesses has put a temporary stop to the construction.

Governor Tom Wolf’s halting of all non-life-sustaining businesses has halted construction at the Little League World Series complex in South Williamsport. But despite the temporary disruption in work, Little League President and CEO Stephen Keener believes the work will be done before the scheduled start date of this year’s Series, he said Friday.

Little League is currently construction a new player dormitory in the Grove, part of a two-phase project of renovations and construction leading up to an expanded field of teams in 2021. The new dormitory is expected to house a new laundry facility and a new infirmary, which Little League wanted to have operational for this summer’s World Series.

The construction companies and Little League were working with a projected completion date of June 1, and Keener said construction had been on schedule until Wolf closed all non-life-sustaining businesses Thursday as part of the work to quell the spread of the coronavirus pandemic.

“We were right on schedule,” Keener said. “We’re in a pretty good place in that aspect. And as soon as the businesses doing the work can get back into business, we’ll continue.”

The June 1 completion date was the goal for Little League in case there were any kind of delays. That way, there was still some wiggle room prior to the start of the World Series, which is currently slated for Aug. 20. The dorm is part of a $15 million project to update facilities at the complex before Little League adds four teams — two from the United States and two international — for the 2021 World Series.

The first part of the construction project includes the new dormitory as well as new batting cages and lights on some of the practice fields to allow for more use. The second part of the project includes upgraded concession facilities, restroom, gift shops and parking. Part of that $15 million is also going to enhance the facilities at the Little League Softball World Series in Greenville, North Carolina, where there will be two additional teams added to the tournament.

The new dormitory at the complex in South Williamsport will allow female players to stay in the dorms with their teammates at the Grove, but still separated from the male players. In the past, female players have been housed outside the Grove at residential properties owned by Little League International.

There have been 19 female players to participate in the Little League World Series, with 12 of them having played since 2000, including Minnesota’s Maddy Freking last year.

“It was always one of the things you heard when you would have a girl or two play, that they would feel a bit isolated from their team,” Keener said. “Now, they’re still isolated in their own living quarters, but they’ll be in the same building.”

Little League has already begun planning for hosting four additional teams at the World Series in 2021. While its operations run like a clock, it’s a matter of expanding those operations to accommodate four more teams, such as finding team uncles for the teams.

But some of the changes Little League has made to its facilities in recent years have been preparing for this inevitable day when the Series would expand. For example, a couple years ago it moved the media work room underneath Lamade Stadium in an effort to provide more space for media to work knowing an additional four teams would also mean additional media coverage.

“Bringing in four teams touches every aspect of operational procedures we have,” Keener said. “We’ve gone through them all in excruciating detail. Every operational aspect has to be considered. I don’t want to say it was easy, but we’ve had a lot of experience operating this event at the 16-team level. Then we take those same processes and it expand it to 20 teams and do what you need to do.”