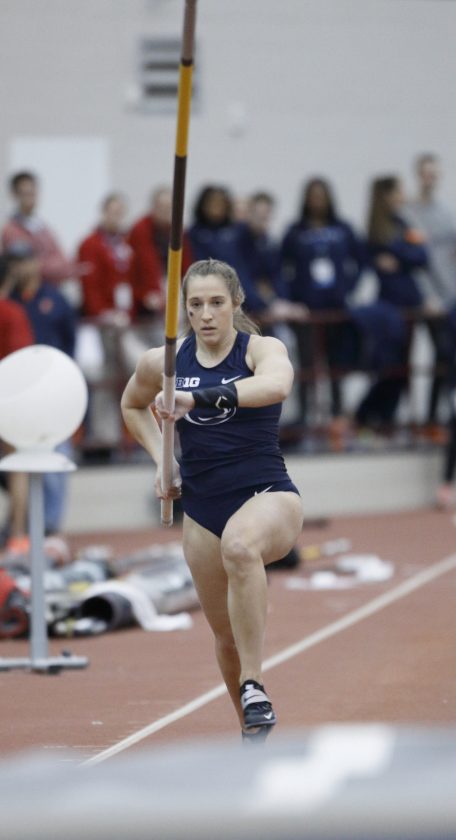 It was during her freshman season that South Williamsport grad Katie Jones realized something didn’t feel right. Every time she started to run down the runway in the pole vault before vaulting, she felt constant pain in her knees.

The trainers at Penn State ran various tests, but she wasn’t showing anything on them. Jones wasn’t exactly sure what it was and why she felt such a pain in her knees.

It wasn’t until the January after her freshman year of competition that an MRI revealed that she tore her meniscus in both of her knees. That meant for an entire season, both indoor and outdoor, Jones competed with two meniscus tears. That included when she tied the Penn State record in the pole vault at the Big Ten outdoor championships at 13 feet, 6 1/4 inches.

The surgeries soon followed in February and March and doubt at that point slowly crept in for the former two-time PIAA pole vault champion.

“For a while I didn’t even think I’d vault with that pain. I was just very concerned that my knees were going to bug me for the rest of my life and that’s how I’d have to live,” Jones said.

After missing an entire year of competition, the road back to being able to compete in the pole vault was far from easy or fast, but Jones showed that she’s still one of the best pole vaulters around.

At the Big Ten indoor championships on Feb. 28-29, Jones got the redemption she was hoping for. Jones cleared 13-11 1/4 to not only win the pole vault title, but also set a Penn State record in the process, besting the previous mark of 13-6 1/4.

“It was kind of an emotional day there. I’ve been working so hard just for that moment and I had finally set a new PR after so long,” Jones said, noting that her height of 13-11 1/4 was the first time she PR’d since her senior year of high school. “It definitely makes everything I worked for that much more rewarding.

“Ever since I walked on Penn State’s campus, it’s something I dreamt of. To have a performance at the Big Ten meet like that is an amazing feeling.”

Jones has a big scar on the right side of her knees from the meniscus surgeries and had some nerve damage as well. But she wasn’t going to let anything set her back from getting back out and winning again.

She missed her entire sophomore year with her injury and used that summer to try to get back into shape and fall back in love with pole vaulting.

“I worked through some pain at first, so I was very concerned that I wouldn’t be up to level that I was at before. It’s a scary thing coming back after being out for so long,” Jones said. “There’s always expectations, but what you have to do is compete and go out there for yourself.

“Over summer I tried to fall in love with it again.”

Jones started pole vaulting again at the beginning of this past season and was clearing 12-11, which Jones joked she wasn’t too happy with, but admitted it was a good start to begin progressing.

The former Mountie standout admitted that she didn’t have any expectations coming into this year. After all, what exactly do you expect whe you’ve missed over a year of competition and had surgery on your knees?

“I really had no expectations for myself, I know that sounds bad, but  just wanted to come out at indoor season and have fun and ultimately I did that and it was awesome,” Jones said. “I just didn’t set an expectation. This is the season for me. I have to just do what I can and see where it takes me.”

For the last three meets before the Big Ten indoor championships, Jones was consistent at 13-8. She was attempting 14-0, but kept narrowly missing each time. Jones knew she had the talent and capability to clear 14 and those misses just fueled her to keep at it and clear it.

She’s one step closer after clearing 13-11 1/4, which she cleared on her second attempt. Jones was one of just two pole vaulters to clear 4.15 meters at the Big Ten indoor championships, joining Purdue sophomore Jessica Bray.

“Last year I was hurt for the whole year, so I didn’t get to compete at all which was very frustrating,” Jones said. “To come back this year after everything I was going through? It really meant a lot to me.”

Jones already has established herself in just two years of competition as an extremely talented college pole vaulter. She holds the Penn State record, which she set as a freshman in outdoor competition then bested this year at the indoor meet and she competed as a freshman at the Big Ten championships where she placed sixth in 2018.

The injury may have temporarily set her back, but Jones is determined to continue to improve and set new heights.

Jones received a medical redshirt due to missing her sophomore season due to injury. But she now will miss the entire outdoor season due to the coronavirus pandemic. The Nittany Lions were set to travel soon to Texas to compete, but all spring sports were canceled across the country in college.

“I don’t know what to do with myself right now. I want to work out, but everything’s closed. But nobody quite knows what to do,” Jones said. “I wish we had our season, but I know public health is the most important thing. We’re all in shock and I was really looking forward to the season because I felt I was on a roll and I felt I had somewhere to go. I was finally on a good path and I was just really looking forward to getting back to outdoor competition, but it’s really surreal right now.”

The NCAA is in talks currently about granting spring student-athletes another year of eligibility due to losing a season of competition. Jones noted that she doesn’t know exactly what that means for her, since she already has a fifth year due to her knee injury.

Jones still doesn’t feel like the spring cancellation is real though, something many athletes across the country feel as well. Most student-athletes haven’t had the time to fully process what has happened.

“I just can’t really believe it. I feel like we’re on spring break and I’ll be back vaulting on Monday and it’s just really hard that the year’s over. We won’t compete again until next indoor season,” Jones said. “It’s just all kinda surreal.”