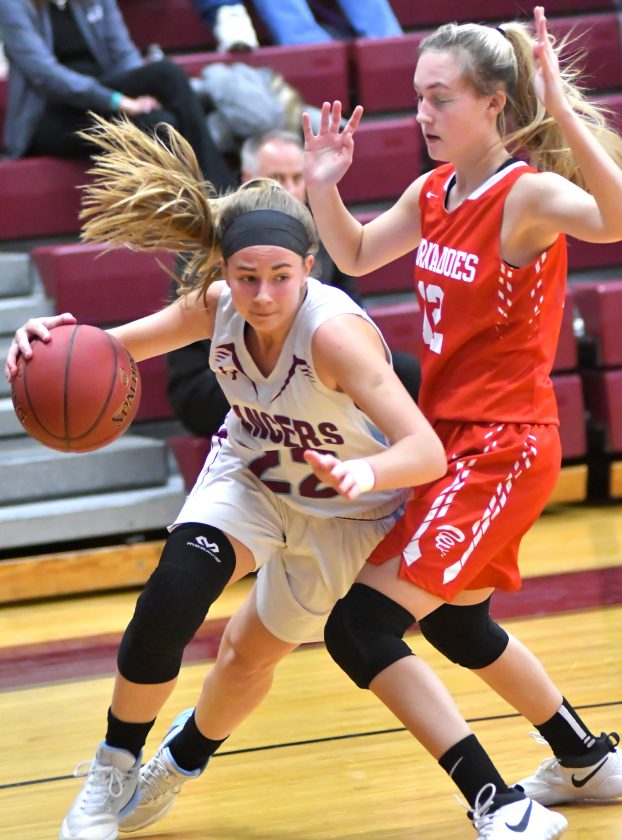 MARK NANCE/Sun-Gazette Loyalsock’s Rhiallie Jessell drives around Mount Carmel’s Emilee Wasilewski in the third quarter during a game in the 2018 season. The Lancers went 22-7 that season.

Loyalsock has just concluded one of the best three-year runs in program history. Despite losing four starters to graduation, the Lancers won 24 games, reached the District 4 Class AAA final and advanced to the state tournament’s second round for a third straight year. During that time, Loyalsock has won 70 games.

It all started in 2018. It was not just that Loyalsock went 22-7 and reached the state’s Sweet 16 either. It was how the gutsy Lancers did so that laid the foundation for all the success which has followed. This was a group defined by its toughness and unselfishness. Promising freshman Cassie Gee tore her ACL in the season opener and leading scorer/three-year starter Maddie Fox tore her ACL in the team’s 15th game. It could have become a lost season, but Loyalsock made it a memorable one.

Despite all the adversity, Loyalsock captured the Heartland Conference championship, reached states for a second straight year and won the program’s first state tournament game since 2010. The obstacles were many and the schedule was even more demanding outside the rugged HAC-III than in it, but Loyalsock kept hurdling them and set quite an example.

“We want to be one of those programs competing at the state level and the girls are understanding that they can,” second-year Loyalsock coach Curtis Jacobson said following the breakthrough state win against perennial power Trinity. “This goes beyond this group of athletes. It builds the program, it builds excitement for young players watching the games and this is the group that hopefully is starting something big.”

Just look at the past two seasons in which Loyalsock has won 48 games as well as a district championship and eight playoff games. All but one starter returns next season, too. That 2018 team started something huge.

Loyalsock started ascending in Jacobson’s first season. The Lancers won 16 games, reached states for the first time since 2011 and gave York Catholic a scare in the first round of states. With many contributors returning, expectations were high. But losing Gee dealt the team an early-season blow and losing Fox felt like a knockout blow.

Instead of reeling, Loyalsock thundered forward. Freshman Summer McNulty flourished and became one of the area’s top players, averaging 13.4 points per game and earning both HAC-III and Sun-Gazette first team all-star honors. Sam Stopper, Sarah Van Fleet, Juliana Cruz, Rhiallie Jessell and Charlotte Neylon also came on strong and had outstanding seasons. No one player could replace Fox, but together Loyalsock became a well-rounded, ferociously driven team that feared no one.

The Lancers were 10-4 when Fox was injured early in the first quarter against South Williamsport. They won 10 of their next 11 games, twice beating HAC-I and HAC-II champions Shamokin. Loyalsock beat both teams in the HAC Tournament, rallying from a seven-point halftime deficit to beat 22-win Lewisburg, 37-31 in the final. In the second half of each HAC Tournament game, Loyalsock held Shamokin and Lewisburg scoreless for a quarter. Cruz ignited that swarming defense with her blanket coverage of dynamic point guard Grace Kelleher while Van Fleet cut off the paint and every player brilliantly executed her role.

“It’s just an extremely tough group of girls,” Jacobson said afterward. “We’re very resilient and when things don’t go our way we pick each other up. Every girl is in it for each other and the coaching staff is in it for the girls. It’s a collective team effort all the way across the board.”

Loyalsock then recorded one of the biggest and most important wins in recent program history.

A multi-time state champion, Trinity was expected to cruise into the second round. The Shamrocks featured two 6-footers and had state title aspirations. Loyalsock immediately snuffed out those dreams. Loyalsock schedules the way it does for games like these and the Lancers remained poised all night. McNulty scored a then career-high 28 points and Loyalsock won, 53-51. Eventual state champion Neumann-Goretti ended Loyalsock’s season four nights later, but the message was sent.

Loyalsock might have been the new kid on the block as far as states went, but the Lancers were here to fight.

“We knew going into this game that to everyone else we were the underdogs, but we didn’t see ourselves as the underdogs,” Van Fleet said that night. “We came into this game knowing that if we played our hearts out we could win, so that’s what we did and it feels great.”

“I think as a team we made a huge statement. We showed that heart and compassion can overcome any challenge,” McNulty. “We were the underdogs and we didn’t play like underdogs. We knew if we came out thinking we have a shot at the game and gave it our all, good things would happen.”

Loyalsock has continued using that formula ever since. And good things keep happening as Loyalsock looks toward 2021.