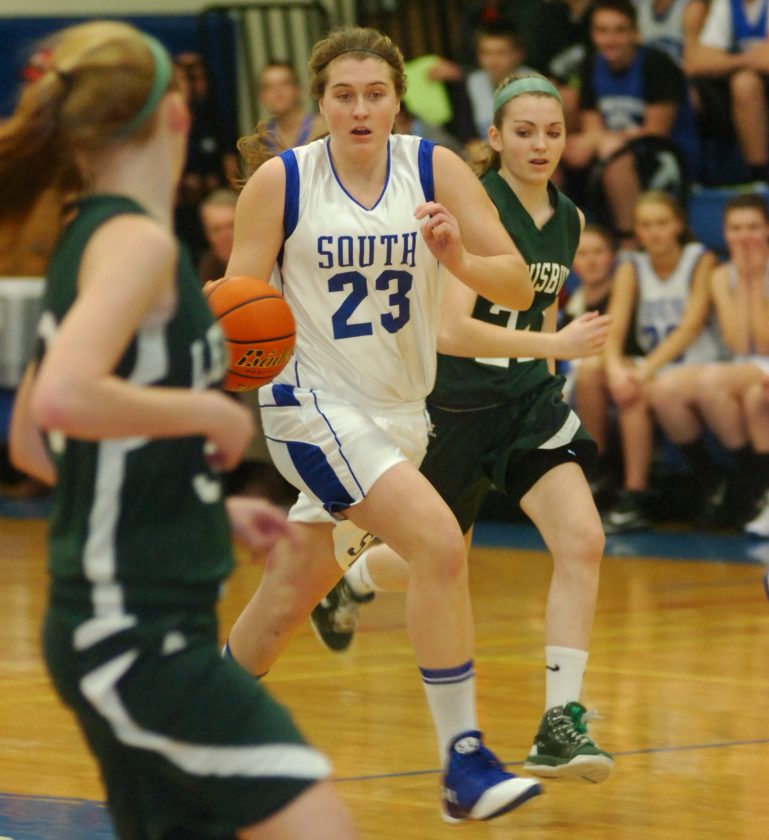 MARK NANCE/Sun-Gazette South Williamsport’s Tierney Pfirman dribbles against Lewisburg during a regular-season game in 2012. Pfirman and the Mounties finished the year with a 21-5 mark.

South Williamsport had seen it before, but this was the first team I had witnessed it. The Mounties were playing at Warrior Run when the Defenders basically dared anybody but South legend Tierney Pfirman to beat it. Two defenders circled Pfirman as she ran to the corner and became a spectator.

It was on four Mounties vs. three Defenders at that point. Pfirman was a one of the best players in area history, but she had some help and the Mounties romped to a 72-39 win.

“We had been practicing against it just in case somebody did that,” Samantha Reasner said after playing a super game off the bench. “I think we were prepared and just tried to come out and play our best. We play our game together and we’re like a family out there.”

“They’re taking Tierney away, but we have four other people with three or four other subs who are capable of doing well,” coach Mike Allison said. “If we can’t score 4 on 3 then we’re not that good.”

The Mounties finished 21-5 in 2012, reaching states for the second time in four years. South should have been the District 4 Class AA runner-up that year, but because overall records were all that seeds were based upon they drew undefeated Mount Carmel in the semifinals and lost one of the toughest games the Tornaodes had that year. Pfirman obviously was the conductor, but there were times when all the pieces of his orchestra came together and South made beautiful music.

Four of South’s losses came against state quarterfinalists Mount Carmel and Delone Catholic. And after a surprising opening-night loss to Towanda, South rattled off 10 straight wins. This was the third time in four years that South won at least 20 games and it averaged an area-high 62 points per game, outscoring opponents by a 16-point average.

“After our second game we felt more like a team,” forward Jamie Steer said following an early-season 65-31 thrashing of Lewisburg. “We can all shoot and we need to keep playing well together.”

They did just that. Pfirman and Steer were both first team Sun-Gazette and HAC-III all-stars. Sophomore Jen Jackson enjoyed a breakout year and Anastasia Laird and Emily Green helped ignite the defense. Reasner, Jillian Jackson and Sarah March had some strong games off the bench as well and South finished the regular season 19-3 before defeating Southern Columbia, 62-48, in the district quarterfinals.

Pfirman produced her fourth all-state campaign and earned first-team honors for a third straight year. A four-time Sun-Gazette Player of the Year, Pfirman fought through all the double teams and junk defenses, averaging 27.7 points, 13 rebounds, an area-decade high 6.1 steals and 3.7 assists per game. She also made 56% of her shots. The Maryland-bound senior was as lethal attacking the basket as she was raining 3-pointers and could play all five positions.

Most important, Pfirman made her teammates better. She would take over when she had to, but also did a masterful job involving the other players and making South tougher to defend in the process.

Steer provided quite a sidekick and the future Penn College standout became the program’s third 1,000-point scorer in two years. Steer was potent in transition, strong inside and averaged 16.4 points, 7.6 rebounds and 2.6 steals per game.

Steer played some of her best games in South’s biggest games and was a force against Mount Carmel in districts. The Tornadoes held off South, 70-64, in a fiercely-fought game, but South hammered Sayre, 59-30, in the consolation game, earning a state tournament berth. Delone Catholic defeated South in the first round, but this team certainly left its mark and no Mountie team won more games last decade.

“It’s definitely a team this year, it’s not individualized or anything,” Pfirman said that year. “We’re well-rounded.”

Pfirman and her fellow seniors helped South win 83 games in their four years and that 2012 team made all its games must-see action.