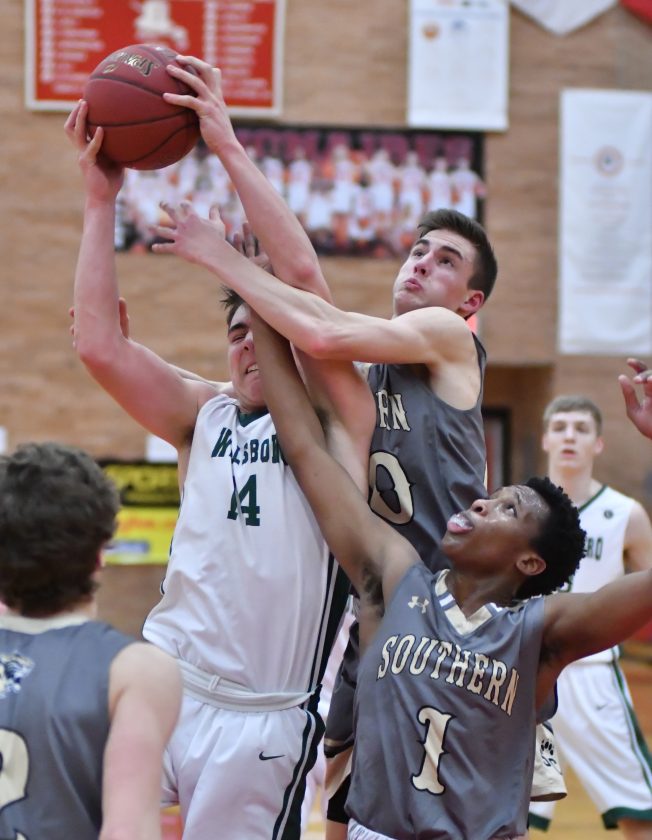 MARK NANCE/Sun-Gazette Wellsboro's 14 is mobbed by Southern Columbia's 20 and 1 in the second quarter.

EDITOR’S NOTE: This is part of a ‘Best of the Decade’ series looking back at the top 10 football, girls and boys basketball, softball and baseball teams, coaches, games and players of the last decade.

Wellsboro produced some outstanding teams over the years, but a district championship always eluded it. The Green Hornets came closer and closer as last decade progressed, but the summit remained out of reach.

This was a championship drought which stretched all the way back to Harry Truman’s final year as President in 1952. It had been 66 long years since Wellsboro could say it was the district’s best team.

How special it was for the 2018 Hornets then that they put their names in the community history books and captured that Holy Grail of a championship.

Wellsboro put together arguably the best season in program history, going 26-2, romping to the Northern Tier League title and then beating perennial district power Loyalsock to win the District 4 Class AAA championship and help the town party like the Baby Boomer days.

“I told them before the game it’s been 66 years and you can go down as one of the greatest teams to ever play at Wellsboro. There’s been some great teams, but none of them came away with a championship and these guys did,” Wellsboro coach Todd Outman said following the final. “They cemented themselves in folklore with Wellsboro from here till the end of it.”

Wellsboro was one of last decade’s most consistent winners, capturing a share of the league title nearly every season and reaching three district finals in five years before 2018. The Hornets went 21-6 in 2017, finishing fourth in districts. With a strong core returning, players and coaches were optimistic they could could make the ultimate breakthrough in 2018.

NTL Player of the Year Dalton Prough missed the team’s first two games and Loyalsock defeated Wellsboro, 52-38, in its second contest. It would be three months and a day until the Hornets lost again. Wellsboro responded to that defeat by playing some of the best basketball the town had ever seen, destroying league opponents and going outside the conference to both toughen themselves up for the playoffs and to make a statement. Wellsboro beat St. John Neumann for the first time since 1983 as well as defending District 4 Class AAAA champion Lewisburg, eventual District 4 Class AAAA champion Montoursville, Jersey Shore and Class 5A Whitehall.

This was a well-rounded team which had three players averaging 8.9 points or game or more and that could effectively hurt teams inside and outside. Prough averaged 15.3 points, 5.9 rebounds and 3.4 assists per game. Brandyn Tuttle emerged as one of the district’s best post players in his first year starting, recording 19 double-doubles and averaging 15.3 points and 11.2 rebounds per game.

Wellsboro pounded opponents like a hammer, beating 20 teams by more than 20 points and winning games by a 27-point average. The Hornets complemented a balanced offense with a swarming defense which allowed just 34.8 points per game.

“The one thing that is a constant with this group of guys is we play defense,” Outman said after a 39-29 win at Montoursville. “We talk about the fact that you’re going to have bad shooting, but they never give up on defense and that keeps us in games.”

The defense continued surging in the postseason, holding four straight opponents to fewer than 40 points. The Hornets easily repeated as NTL Tournament champions, made quick work of Bloomsburg in the district quarterfinals and then set their sights on revenge and a championship. The Hornets earned a semifinal rematch against South Columbia a year after the Tigers upset them. This time it was no contest as Wellsboro shut down a potent offense and rolled to a 53-28 victory. All that stood between the Hornets and that district championship now was Loyalsock.

The Lancers had been a thorn in Wellsboro’s side throughout the decade, beating it in the 2013 and 2015 finals as well as the 2017 third-place game. But unlike when they had played in early December, Wellsboro was full strength this time.

And this time, destiny was Wellsboro’s.

Prough hit a late second-quarter buzzer-beater to put Wellsboro up one at halftime and it never trailed again as it defeated Loyalsock, 53-47. Prough scored 27 points, Tuttle recorded another double-double and it felt like the Wellsboro fans who packed into Montoursville’s gym tore the roof off as 66 years of frustration came pouring out in jubilant cheers.

“You run down the court and you just think, ‘Wow! This hasn’t been done in 66 years,'” Prough said after also scoring his 1,000th career point that day. “It’s just amazing.”

“I don’t even know how to put it into words. It’s crazy,” Henry said after scoring 12 points. “This is what we wanted from the time we started. We lost the other district championships we played in, but we weren’t going to let this one slip away.”

Notre Dame-Green Pond ended Wellsboro’s season a week later, defeating it, 48-41, in the state tournament. The Hornets might have been the better team, but picked a bad day to have one of their worst shooting performances.

In 2018, Wellsboro’s players lived that dream.

“Coach said if we win this championship this year it’s something we can tell our kids about and show our kids,” Tuttle said following the final. “They can never take this away from us.”