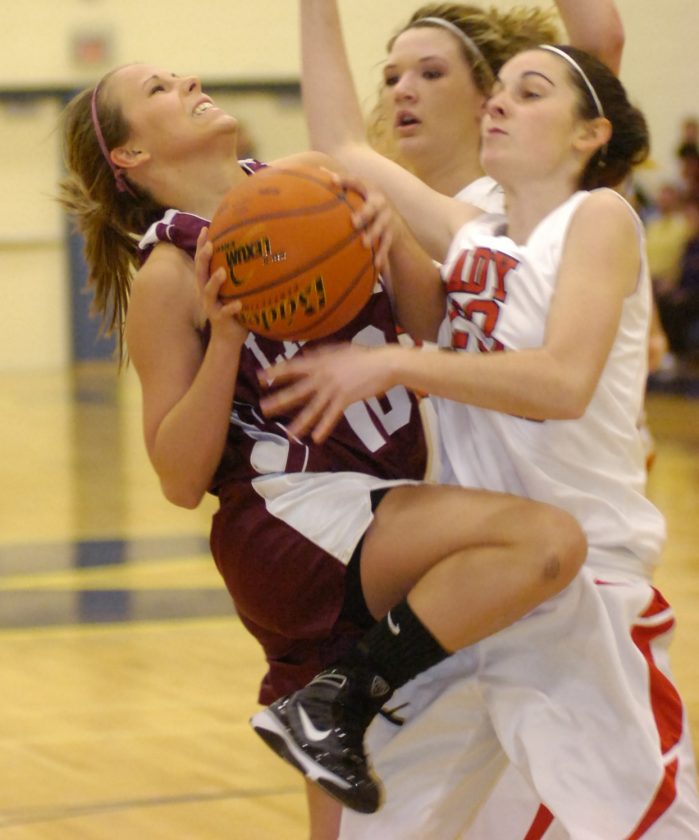 MARK NANCE/Sun-Gazette Loyalsock’s Avery Cero tries to go up for a shot against Troy during a District 4 Class AA playoff game in 2010.

EDITOR’S NOTE: This is part of a ‘Best of the Decade’ series looking back at the top 10 football, girls and boys basketball, softball and baseball teams, coaches, games and players of the last decade.

Incoming coach Demarr Wright had spent the previous six seasons seasons as a Williamsport boys assistant coach. He was part of some high-flying teams and had coached against many high-flying opponents. His goal when he arrived at Loyalsock prior to the 2009-10 team was to build a similar up-tempo system, one that could score 100 points in a game.

The 100 points never happened, but Wright’s players bought into his new system. That was a difference between this and some previous Loyalsock teams. But those teams also shared a common bond: winning.

Loyalsock overcame injuries and adversity in 2010 and captured its third District 4 Class AA championship in five years. The Lancers finished 21-7, reached the second round of states and became a district force late in the season. Loyalsock played the first six games without Sun-Gazette runner-up for Player of the Year Keely Henninger who was sidelined by an elbow injury. Once she returned, Loyalsock took off, kept improving and won 19 of its last 21 games while romping to another district title.

“Every little thing now just makes us stronger because we know we have to get through it and we know we’ve been able to do it,” Henninger said following the district final. “Other people will step up when other people are out and we just come together as a team.”

Even when Henninger was out, Loyalsock offered a glimpse into how good it would become. Jonaida Williamsport delivered a monster performance in the team’s second game, scoring a career-high 26 points as Loyalsock stunned defending district champion South Williamsport, 70-61. Yes, the Lancers lost their next four games, but the team learned a lot about itself and what it could do without Henninger.

That made it especially potent when the three-time league and Sun-Gazette first team all-star returned. The Lancers started soaring as all the pieces came together and they settled into a new system. Henninger was dominant inside and could also take her game outside, while running the court like a guard. She averaged 16 points, 6.5 rebounds and 2.4 assists per game. Future all-state point guard Sami Lane put together a second straight fantastic season and Williams became one of the area’s premier forwards. All three players averaged more than 12 points per game and Cassandra Soars developed into one of the district’s best defenders. Avery Cero and Mackenzie Yaw could stretch the defense and also played a big role in helping Loyalsock hold teams to 45 points per game.

The Lancers were the only team that beat South during the regular season, sweeping the season series and rallied from a two-game deficit with four remaining to capture a second straight HAC-II championship.

Loyalsock navigated a tough schedule and defeated perennial District 11 power North Schuylkill late in the season. Despite its league championship and resume, Loyalsock was seeded No. 6 for districts because District 4 based its seedings only on overall records during that time. Whatever the seed, Loyalsock left no doubt that it was the district’s best team, beating four district playoff opponents by an 18-point average.

The Lancers faced NTL-East champion Towanda in the district final. The Black Knights scored 89 points in a first-round win against Southern Columbia and beat title contenders Lewisburg and Mount Carmel on its way to the final. Still, they were no match for Loyalsock which pounded Towanda for a second time that season, winning 61-39. The Lancers beat Towanda by 60 combined points in those two meetings.

“Everything builds up to this and then you have to go and get it,” Soars said after holding dynamic guard Mariah Monahan to six points while grabbing nine rebounds. “We’re a team and we always stick together, thick or thin.”

That showed in the final. Lane rolled her ankle in the first quarter and missed nearly five minutes before returning. Henninger picked up her fourth foul late in the third quarter, but Loyalsock never buckled. The Lancers took the lead on a Lane jumper late in the first quarter and kept extending it from there. Henninger scored 24 points and grabbed 10 rebounds while Williams produced 22 points, 10 rebounds and five assists.

Not having Henninger early in the season hurt in the win column, but it might have also provided a boost as the season continued.

“Keely being hurt early in the season was possibly a blessing in disguise because every girl has had to step up. What happened today wasn’t unfamiliar territory for them today because they’ve been through it before,” Wright said afterward. “My girls played a heck of a game. They came ready to play.”

“When things like that happen we just all play harder because we don’t want to lose now,” Williams said. “We have worked too hard to not win now.”

Loyalsock continued winning six nights later, defeating Mid Valley, 49-43. Lancaster Mennonite defeated Loyalsock, 60-48, in the second round with the Lancers going down swinging. This was an explosive team, but it also was tough.

Loyalsock returned to the district final and states the following season, but it would be nine years before it won another district title. Winning that championship in such a loaded bracket was a testament to how good the 2010 Lancers were.