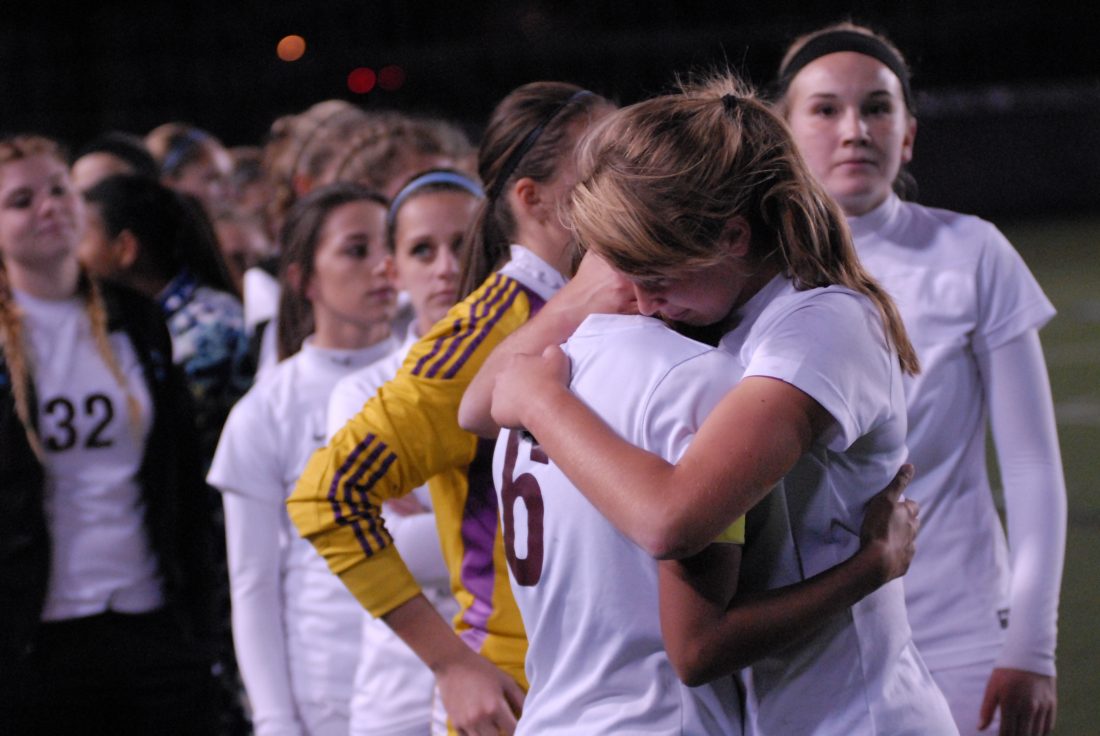 MARK NANCE/Sun-Gazette Loyalsock players console on another after losing in the 2015 PIAA Class A championship to Trinity, 3-1, at Hersheypark Stadium. It was named the No. 5 best area girls soccer game of the decade.

EDITOR’S NOTE: This is the fourth part of a five-part series revealing the best girls soccer games of the 2010s.

The countdown has reached the final six games of the decade. And Nos. 6-3 all feature state playoff games.

From a first-round state playoff game being decided with an enormous penalty kick to two heartbreaking defeats in the state final, including one in dramatic fashion in overtime, the great games continue with the girls best of the 2010s.

Montoursville had one of its best teams of the 2010s this year and ended the season going 19-1-3 with the only loss coming in the state quarterfinals. It’s the first of just two instances this past decade where Montoursville’s only loss came in the state tournament (2016).

But before that loss ended the Warriors’ season, Montoursville played a great game to defeat Scranton Prep, 2-1.

The game was well played by both teams, and it ultimately came down to a penalty kick by Montoursville standout Lana Spitler.

Spitler came through with her kick and was the hero of the game, scoring the game-winner in the 75th minute, propelling the Warriors with just five minutes to spare until overtime.

“I had to make it. It was for my team and I want to keep going,” Spitler said after the game.

Madi Dewald scored the game’s first goal before Elana Falcone tied it up in the 70th minute for Scranton Prep. That’s when a call in the 18-yard box gave Spitler the chance to come up huge and seal the win.

Freshman Kirsten O’Malley played excellent in this one as well, controlling the midfield and helping limit Scranton Prep’s offensive surges as Scranton Prep ended with just five shots on goal.

“Her knowledge of the game is really impressive,” Montoursville coach Erin Bennett said of O’Malley. “We are getting so much out of her.”

This Montoursville team was also just one of two (2016) that won a state playoff game in the 2010s.

The tears in sophomore Rhiallie Jessell’s eyes after the game said everything as she was crouched down, silver medal draping off her neck, as her teammates were receiving their second-place medals.

The Lancers knew that Trinity was going to be a tough opponent. Everyone knows the Shamrocks are year in and year out one of the state’s best teams in girls soccer.

It didn’t matter who the opponent was though, Loyalsock believed they could compete with anyone in the state that year and the Lancers did just that on that chilly night in November in 2015. Loyalsock played Trinity as well as anyone possibly could, but came up just short, falling, 3-1.

Loyalsock gave Trinity everything it had that game and scored against one of the best defenses in the state.

With 73 seconds remaining in the first half, Jessell found a streaking Myriah Saar and fed her the ball. That’s when Saar rifled a shot from 15 yards out past Knaub to the far left post to tie it up at 1-1.

Loyalsock continued to play tough and get opportunities throughout the second half. However the Shamrocks used an offside trap defensive style of play that frustrated speedsters Saar and Jessell on breakaway chances.

“It got a little annoying, but it obviously worked,” Jessell said of the trap after the game. “As the game progressed, we lost a little bit of energy and couldn’t find the net.”

Grace Schreckengast should get a ton of credit as well in that game. She came up with 10 saves as Trinity held a 14-5 shots advantage.

After Lauren Gatesman gave Trinity the 2-1 lead six minutes into the second half, the Shamrocks scored another goal by Amy Corbett with 28:30 remaining.

There’s one moment from this game that stands above the rest and that was when defender Chloe Michaels single-handedly saved the game and prevented Bedford from scoring in regulation.

It solidified her reputation as one of the best defensive players this decade.

With 2 minutes, 45 seconds left in the first half, Bedford’s Amber Thomas had a free kick 23 yards out and tried sending it inside of the left post. It hit the crossbar and landed nearly at the feet of Kiley Horne. Horne tapped it lightly, only to see Michaels come from out of nowhere at the last second to clear it away inches from being a goal.

“My heart was racing at that point, I knew that I couldn’t let it go in, so I did what I could to get it out,” Michaels said after the game.

Lewisburg caught fire that season at the right moment. The Green Dragons entered the month of October with a losing record, and few probably thought at that point a deep state run was possible, let alone getting to the title game.

The Green Dragons had a solid run through states to get to the championship game, before falling in a heartbreaker, 1-0, in overtime at Hersheypark Stadium.

“We gave it our all. Chloe again was solid. We didn’t panic. We didn’t give up a good chance other than the free kick. We had chances,” Lewisburg coach Jose Vega said. “It’s a tough way to lose on a penalty. It’s disappointing.”

The Green Dragons held a 7-4 shots advantage that game and had moments and chances to score, but it was a penalty kick by Thomas that ended the game just a minute into overtime. A tough way to have your season end, but it was a memorable run and game Lewisburg had.

It also was the final game for Vega, who stepped down after being the coach since 2008.

“It means a lot to us. we don’t have a lot of people on the team, so just for us to make it through the whole season and make it here, it’s huge,” Michaels said.