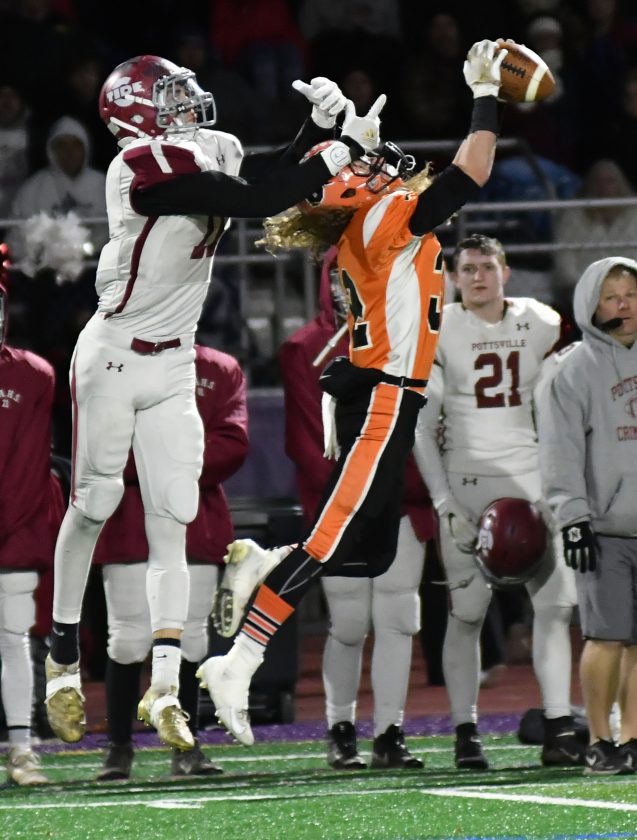 The unknown makes sports great. Once someone thinks he or she has seen everything, something else comes along and tops it. After watching Southern Columbia edge Montoursville, 56-50, in the 2015 District 4 Class AA championship, this reporter was convinced he would never see a more exciting high school football game.

On a frigid Friday last November in Danville, Jersey Shore and Pottsville played one of the most thrilling games in any sport I have ever witnessed. It was like a blockbuster movie which featured a series of cliff-hanging elements. Every time the finish appeared in sight, another twist followed until Jersey Shore finally provided a Hollywood-type ending in what became a fairy tale season.

Jersey Shore erased a 21-point first-quarter deficit, tied it in the final minute of regulation, then outlasted Pottsville, 42-35, in triple overtime in this amazing Class AAAA state quarterfinal. The Bulldogs, a team which lost most of its starters from the previous season, reached the state semifinals for the first time in program history and left its ecstatic fans who jammed the bleachers in awe.

“We’re dog fighters. We fight. We knew we were in this,” said wide receiver Cayden Hess after catching nine passes for 98 yards and scoring twice in the first two overtimes. “We’re all in this together. We’re a family.”

“All the credit goes to the kids. They did this,” Jersey Shore coach Tom Gravish said. “Our kids believe in each other. We have 11 Bulldogs on the field at one time playing with one heartbeat. We had to adapt, adjust and overcome. Our kids are just a bunch of battlers.”

Jersey Shore had shown that all season, capturing a second HAC-I and District 4 championship in a row and navigating a daunting schedule which included a state champion, four district champions and six district finalists. Jersey Shore’s three losses were to Montoursville, Mount Carmel and Southern Columbia teams that went a combined 38-5. The Bulldogs recorded impressive road wins against District 6 champions Bellefonte and Bald Eagle Area, scoring 97 points in those games. The Bulldogs featured a video-game like offense which operated at an Usain Bolt rate of speed. Quarterback Tanner Lorson earned Class AAAA Player of the Year honors, shattering the area record with 3,405 passing yards. He also went over 1,100 rushing yards. Josh Malicky ran for more than 1,000 yards and Hess and Stanton Westlin were both all-state receivers.

The defense was as hard-hitting as the offense was explosive. All-state linebacker Dawson Sechrist made a run at 200 tackles, Ryan Kershner and Karter Peacock anchored a strong line, and Brett Guthrie and Anthony Shaffer both were lockdown cornerbacks.

Jersey Shore hammered Shikellamy and Selinsgrove to repeat as district champions for the first time in program history. It then made history and won its first state tournament game, downing District 1 champion Bishop Shanahan.

When Pottsville scored on its first three possessions and took a 21-0 lead a little more than 11 minutes into the state quarterfinals, it appeared the Shanahan win would be Jersey Shore’s last. Pottsville was dominating all facets, outgaining Jersey Shore, 137-11. But the Tide became greedy when going for the kill early in the second quarter. Instead of punting and pinning Jersey Shore deep, Pottsville went for it on fourth-and-17. The Bulldogs forced an incompletion and the game started changing dramatically.

All parts of this no-huddle offense started working in harmony. Jersey Shore scored two quick touchdowns — Lorson running for a 10-yard score before finding Owen Anderson for an 8-yard strike — and pulled within 21-14 at halftime. The defense started swarming and held Pottsville to 102 yards in the final three quarters as Sechrist made 15 tackles.

“We knew we could play with these guys. The first quarter was not us. We knew it wasn’t us,” Guthrie said. “We went into the second quarter with the mindset that we can compete and we have to compete or we’re not going to win this game. We knew what was on the line.”

Jersey Shore was taking over, but the game-tying score remained elusive. The Bulldogs threatened, but kept being denied. The clock became the enemy and, with Pottsville facing a third-and-1 from its 17 with three minutes remaining, the Bulldogs desperately needed a stop to save their season. Sechrist delivered it. The captain made the most important play of his scholastic career, stoning fullback Joey Ferraro for no gain to force a punt.

Given one last chance, Lorson worked the offense like Joe Montana and the Bulldogs started moving. On third down, Lorson lofted a 26-yard touchdown to Westlin who made an outstanding catch while covered well, with Lorson putting the ball where only he could catch it. Cameron Allison provided a clutch extra point and with 54.2 seconds left the game was tied 21-21.

“We knew if we hung around with them that at the end with all our hard work we could take over that game,” Lorson said after throwing for 279 yards and five touchdowns. “We showed that on the scoreboard.”

Jersey Shore had the ball first in overtime and was going nowhere after a sack had it facing a third-and-goal from the 26. Again, Jersey Shore laughed in the face of adversity and Lorson threw a 26-yard rocket to Hess who made a super catch along the right sideline for the go-ahead touchdown. Unfazed, Pottsville scored on its next two series and led 35-28.

Again, Lorson and Hess delivered in dramatic fashion, this time Lorson throwing a fastball to nearly the same spot in the end zone and Hess making a juggling catch. Allison again extended the season, drilling another extra point and Jersey Shore stayed on the field for the first triple overtime possession. The pressure turned up on a fourth-and-goal from the 5, Jersey Shore stayed calm. Lorson sucked in the defense on a roll out to his left, and found Guthrie in the back of the end zone to give the Bulldogs a 42-35 lead.

At this point, the only thing this classic was missing was an ending. Guthrie finally provided it. Pottsville kept testing Guthrie and he responded all night. Quarterback Damon Yost went for a game-tying touchdown pass, but Guthrie perfectly read the play, broke to his right and made the second catch of his life, securing the game-clinching interception.

“It kind of took me a few seconds to realize, wow, we won that game,” Guthrie said. “I will never forget this moment. The feelings I have right now are indescribable. I’m so proud of everyone on this team. The work everyone on this team has put in is amazing. It’s an all-around team effort. I love these guys to death.”

A week later, Jersey Shore put up a good fight against undefeated Dallas before losing the state semifinal, 56-28, to eventual state runner-up Dallas. That Pottsville win, however, will be the game its players, coaches and fans remember most about that memorable 2019 season. This was the game that perfectly explained why Jersey Shore was so good.