Decade’s best No. 10: Williamsport beat Shore in an OT thriller in 2019 season in girls basketball 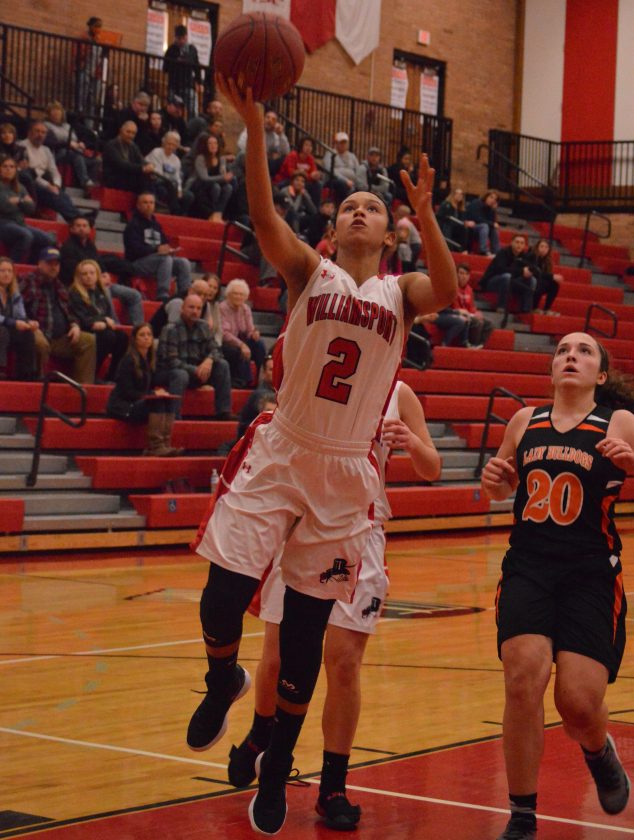 SUN-GAZETTE FILE PHOTO Williamsport’s Jada Whaley goes up for a basket during a game in 2019 against Jersey Shore that the Millionaires won in overtime, 63-60. Jersey Shore’s Hannah Kauffman (20) looks on.

Look at most top 10 lists which feature games and one will see mostly playoff contests listed. It makes sense. The higher the stakes, the more the excitement. A season hanging in the balance on top of a great game makes for a classic.

Still, there are some regular season games which are so exciting, they must be included.

Like this February showdown at the Magic Dome. Williamsport vs. Jersey Shore has been defined by close and exciting games over the last five years and this was the best of the bunch. Both teams were hoping to build playoff momentum late in the regular season and went after each other like two UFC fighters, neither one giving an inch.

The lead changed hands seven times in the fourth quarter before Jersey Shore took a five-point lead. Remarkably, Jada Whaley scored five straight points in the last 9.9 seconds to force overtime, then dominated late in that extra session while willing Williamsport to a dramatic 63-60 victory.

“Everyone that got in the game contributed. There were a lot of positives out of it and that win means a lot coming down the stretch,” Williamsport coach Terrill Seward-Buxton said afterward “That’s not the coaches. That’s them wanting to listen to us and take what we’re trying to tell them onto the court and having pride in their effort out there which has been big. As the season goes on you can see them doing the little things we need to be doing to win.”

Those little things ultimately would help Williamsport reach its first district final since 2011. Ditto for an undersized, but hard-working Jersey Shore team which reached states for a second time in three years. That was in the future, though, and both teams put everything into this game. Jersey Shore had won the last two in this series by 10 combined points and it was obvious from the start, the latest rivalry game would be equally entertaining.

The lead repeatedly exchanged hands throughout the first half, Williamsport eventually taking a 27-26 halftime lead. The Millionaires were fighting adversity, losing Samiyah Little to a second-quarter injury, defensive specialist Fondrea McClain to a concussion and Emily Pardee to foul trouble. Little and Pardee eventually returned and played big roles, Little grabbing 13 rebounds and blocking eight shots. Freshmen Kailee Helmrich and Sarina Beiter also provided quality minutes off the bench and Williamsport led for most of the third quarter until Hannah Kauffman’s coast to coast layup tied it 40-40 entering the fourth.

Kauffman earned all-state honors for a second time that season and Whaley was one of District 4’s premier players, scoring her 1,000th point earlier in the season. The game was great by itself but Kauffman and Whaley showcasing their skills against each other was a terrific subplot. Both players put their teams on their backs at times, Kaufman scoring 33 points and Whaley scoring 29 while adding eight rebounds and five steals.

Both continued hitting big shots during the fourth quarter and the lead changed hands seven times. Whaley’s steal and layup put Williamsport up 50-49 late, but Kauffman answered with a long jumper. The program’s second all-time leading scorer then made four straight free throws which gave it a 55-50 lead in the final seconds.

Just when it seemed Jersey Shore would win another hard-fought game in this series defined by them, Whaley showed exactly what made her a great player. Jersey Shore played good defense on the ensuing Millionaire possession, but Whaley drained a long jumper and pulled Williamsport within 55-52 at the 9.9-second mark. Jersey Shore missed two foul shots with four seconds remaining and Williamsport had life. Little grabbed the rebound but the ball popped free just past halfcourt. Kalindi Maggs retrieved it and whipped a quick pass to Whaley. Having no time to dribble, Whaley lofted a shot from beyond NBA 3-point range and swished it as her teammates celebrated and Jersey Shore’s stood there stunned.

“I was really excited. I was happy for that. It just happened to be me and I was really happy because made the shot,” Whaley said. “I practice that a lot with my dad because we will go and work and I’m pretty fast, so I can do that kind of stuff.”

Whaley’s shot could have crushed Jersey Shore, but the Bulldogs came back attacking and Kauffman’s 3-pointer had it up 60-57 with 1 minute, 25 seconds remaining. Again Whaley took command. The senior point guard made three steals in the game’s final minute and calmly sank the go-ahead free throws with 25 seconds left. Whaley blocked a shot, then made a steal on Jersey Shore’s next possession before hitting two more clutch foul shots. Putting a stamp on her performance, Whaley clinched the win when she stole Jersey Shore’s last-ditch in-bounds pass on its last possession.

“I just had a lot confidence there,” Whaley said. “I was thinking I’m good at foul shots so I’m going to make them because I wanted to win the game.”

“We got what we wanted and it just didn’t work out. Those are the things you take with you. Williamsport played very hard, we played very hard and they just hit one more shot,” Jersey Shore coach Darrin Bischof said. “We were hustling and working hard. We can take from this game and move on.”

Both teams did that quite well.