Decade’s best No. 2: Montoursville gave Southern everything it had in 2015 thriller in District 4 Class AA football final 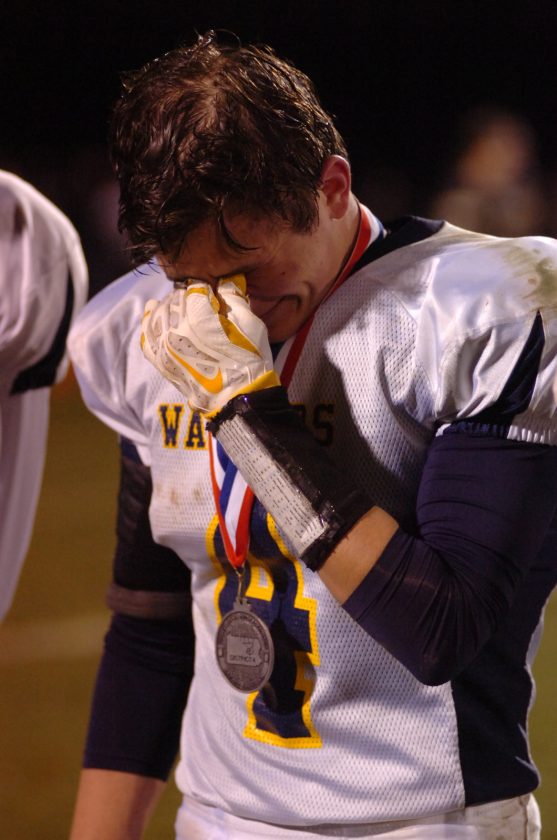 EDITOR’S NOTE: This is a series looking back at the Top 10 high school football teams, coaches, games and players from the last decade.

Southern Columbia was steamrolling its way toward another state championship. The Tigers were 12-0 and had mercy-ruled all but one opponent, including consecutive playoff teams. And when Southern built a 14-0 first-quarter lead against Montoursville in the District 4 Class AA final while allowing just minus-3 yards, another blowout appeared imminent.

Instead what looked like a slaugher turned into a thrilling game this reporter still has trouble comprehending even though he was there. In a performance that represented everything its program stands for, Montoursville came roaring back, scoring at will against one of the state’s best defenses. It turned this into a high-speed race with two district heavyweights constantly trading paint over the final mesmerizing three quarters. The Warriors scored 29 second-quarter points, tied the game four times and were driving in the final 90 seconds before Southern prevailed, 56-50. The Tigers won the state championship three weeks later. Montoursville won the admiration of all who witnessed its amazing performance.

“We might have to drag some of these guys off here because they left it all out here,” Montoursville coach J.C. Keefer said following the silver and gold medal ceremonies. “They can go home and look at themselves in the mirror and smile and that’s all I ever ask of them.”

“Everyone picks each other up,” Montoursville wide receiver Dylan Fontenot said after catching five passes for 78 yards and a touchdown. “That’s how we are. That’s why we are who we are and that’s why I have a medal around my neck.”

Montoursville captured the 2014 district championship and became just the second team in 24 seasons to beat Southern in districts, defeating it, 26-14, in the semifinals. The Warriors started 2015 strong at 5-1 but then dropped close home games to Selinsgrove and Hughesville. At 6-3, Montoursville was in danger of being the No. 8 seed in an eight-team field and having to play Southern in the quarterfinals. In a sign of things to come, the Warriors picked themselves up off the ground and fought back, pounding rival Loyalsock, 38-14, on the road in their regular-season finale and moving all the way up to No. 3. Ethan Lazorka’s field goal lifted it to a 10-7 quarterfinal win against Lewisburg and Montoursville routed Athens on the road, 38-14, earning a shot at another title. Keith Batkowski ran for nearly 2,000 yards, Brycen Mussina topped 1,800 through the air and two-way starter Ben Cerney became a versatile offensive weapon while earning all-state defensive line honors.

Southern plowed its way through the regular season and scored 91 points in consecutive playoff victories against Troy and Hughesville. The Tigers wanted a rematch with Montoursville and had their home fans watching with delight as they dominated the first quarter and took a 14-0 lead. Southern started driving again early in the second quarter, but safety Jacob Strassner made two straight big plays and forced a long field goal that fell short.

Then the fireworks started.

A game that few not wearing white, blue and gold expected started moving at warp speed. Batkowski’s 6-yard touchdown capped an 80-yard drive and suddenly both teams could not be stopped. On the next 16 series, Southern and Montoursville combined for 13 touchdowns. Add in a pick and a kickoff return and it was 15 touchdowns over the final 31 minutes. Batkowski’s touchdown actually was the first of three consecutive scores as Hunter Thomas (241 yards) scored on an 80-yard run a play later before Tommy Shea (9 catches, 127 yards) returned a kickoff 90 yards for a touchdown.

Cerney scored on a short touchdown run which made it an eight-point game before Montoursville recovered an onside kick. Batkowski’s 20-yard run and Mussina’s 2-point pass to Mitchell Rothrock tied it 29-29 at halftime. Southern sometimes went weeks without allowing 29 points and Montoursville had scored 29 against it in just 5 minutes, 47 seconds.

“We thought we had it at halftime,” She said. “Our starting offense is a heck of an offense. We always try and execute and do what we can do and if we do we’ll get some big plays.”

Montoursville continued making those big plays in the second half, answering three Southern touchdowns with scores of their own. At one point, Montoursville scored on six of seven possessions. Mussina’s 34-yard touchdown to Fontenot tied it 36-36 and Cerney’s 1-yard score made it 43-43 entering the fourth.

Mussina threw for 239 yards and repeatedly made big throws in key situations. Three times in the second half he extended scoring drives with fourth-down passes covering nine, 44 and 29 yards. His 29-yarder to Shea on 4th-and-15 set up Batkowski for a 2-yard touchdown as Montoursville tied it, 50-50 with 8:36 remaining.

“It says we’re a tough team. Even though they kept driving we never stopped,” Shea said. “We just kept going and it just shows we never back down from anybody.”

Southern put together a lengthy drive and went up 56-50 on Nick Becker’s 2-yard touchdown run. When the extra point was missed, audible gasps could be heard throughout the stadium. A Montoursville touchdown and extra point and the Warriors likely would win a stunner. Right on cue, they marched toward midfield, but Southern’s defense finally came up with the stop it had been searching for the last three quarters. Austin Knepp and Matt Bell combined to sack Mussina on fourth down and, with Montoursville out of timeouts and 76 seconds remaining, victory was Southern’s.

“It just took a series or two and then these guys just exploded and executed. It was fun,” Keefer said. “It stings right now, but it was a really fun game and these guys having nothing to hang their heads about.”

Southern and Montoursville combined for 106 points, 902 yards and 46 first downs. Batkowski, Thomas and Jarred Torres all topped 100 rushing yards. Strassner, Cerney and Shea all had 10 tackles. Montoursville encountered injuries all season and lost a few more players during this epic championship. But they never were knocked down or out. The Warriors kept fighting back and showing no fear. To use a boxing analogy there was no knockout, just a close decision. They became just the second team to score 50 points against a Jim Roth-coached team and the first to do it against the starters. Southern allowed 15 points per game in 15 contests that year and 50 against the Warriors.

Montoursville played Southern better than any team that season. The Tigers won their next three games fairly easily, battering Aliquippa, 49-14, in the state final. Who knows what Montoursville would have done had it advanced.

Montoursville proved how worthy a champion it also was with this courageous performance.