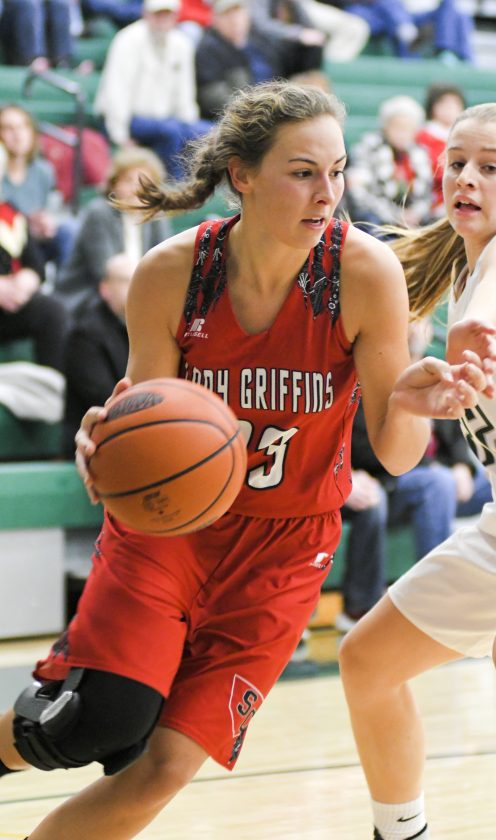 SUN-GAZETTE FILE PHOTO Sullivan County’s Kaiti Beinlich dribbles during a game against Hughesville in December, 2016. Just 10 months prior, Beinlich and the Griffins defeated longtime nemesis St. John Neumann in the first round of the 2016 District 4 Class A playoffs, 55-53. It was the Griffins second playoff win in 20 years and first against the Golden Knights since 2011.

Every great run must have a starting point. Sullivan County’s came on February 16, 2016. This night was the launching pad and Sullivan started soaring soon after. Playing long-time nemesis St. John Neumann in front of a huge home crowd, Sullivan County exorcised past ghosts, won a its first playoff game in six years and started believing that it could attain playoff greatness.

St. John Neumann made a furious fourth-quarter rally, but Sarah Parrish hit a last-second buzzer-beater and Sullivan County won this District 4 Class A first-round thriller, 55-53. It was just the second Sullivan County playoff win in 20 years and also its first victory against Neumann since 2011.

It also was a major breakthrough.

“They are doing a good job of not letting each other down. That’s a big part of our success right now,” second-year coach Shannon Pietroski said afterward. “They’re listing to what we’ve been teaching them and it’s coming to fruition. They’re getting it. We’ve come a long way.”

It already had felt like Sullivan County came light years in 2016. The Griffins made an eight-win improvement, going 15-9 and reached districts for the first time in five years, rallying from a 1-3 start to do so. Neumann thumped Sullivan County, 47-29 in the Griffins’ third-game of the season but 41 days later the gap had significantly closed with the Knights winning a back and forth 54-49 rematch.

Sullivan County featured a strong inside game with Sarah Parrish and Kaiti Beinlich, while guards Ashley Faus and Torie Shultz could wreck an opponent’s offensive game plan. Bethany Weinhardt could do a bit of everything and the Griffins were surging at the right time.

Neumann was dealt an inside blow when forward Destiny Hill tore her ACL late in the season, but remained dangerous. Megan Helminiak and Baylie Gerrity were excellent 3-year starters who topped 1,000 career points and 700 rebounds, respectively. Sophomore Shanya McNamee had become a weapon as well and was on her to scoring 1,000 career points. Helminiak and Gerrity played prominent roles as sophomores when Neumann reached states for the only time in program history and stunned Steel-High in the first round.

Neumann was the more experienced team, but Sullivan County was eager for revenge and started strong, building an 18-12 first-quarter lead. Faus picked up her third foul that quarter, but remained in the game almost the entire way and started changing the game in the second quarter. She scored six quick points as Sullivan answered a big Neumann run with one of its own an went up 29-25 at halftime. Faus played one of her best games, finishing with 13 points, five rebounds, four steals and four assists while never picking up her fourth foul.

“Ash did a great job,” Pietroski said. “She has the ability, but now that she has the confidence she’s really turning into a great player.”

All the Griffins looked like great players in the third quarter as the Griffins started to create some distance and build a nine-point lead. Beinlich (14 points) set the tone when she scored the team’s first eight points that quarter. Shultz (4 assists, 3 steals) asserted herself as did Weinhardt (6 points) and Stef Kramer (7 rebounds) who shined off the bench. Everything was working and Sullivan took an 11-point lead with five minutes remaining and seemed well on its way to a big win, especially with

Neumann disagreed. Despite two starters fouling out, Gerrity and Helminiak ignited a big comeback, determined to not let their scholastic careers end. Gerrity was a 5-foot-7 forward who always played like she was a foot taller and scored a season-high 17 points while adding 10 rebounds and four steals. Helminiak (12 points) ignited the comeback with a 3-pointer, Gerrity added another and McNamee hit both ends of a 1-and-1 as Neumann pulled within 51-50.

“Those two (Helminiak and Gerrity) have been two of the best representatives for our school on and off the court,” Neumann coach Steve Sholder said afterward. “I told all the girls coming back next year, ‘follow their lead.'”

Gabby Lisi started following them almost as soon as she entered the game. She was mostly a JV player that year, but Lisi showed no fear when inserted late and drilled a game-tying 3-pointer with 30 seconds remaining, making it, 53-53.

Sullivan County had read this script before, but was sick of it and provided a rewrite. Parrish would not the Griffins lose and grabbed three offensive rebounds on the ensuing possession, scoring the game-winning with 10.8 seconds remaining. Neumann’s game-tying shot was off the mark and Sullivan County celebrated a 55-53 victory.

“I’m really happy I made the shot, but I was really nervous because I missed and then Kaiti missed, but we stuck with it and put it in,” Parrish said after scoring a game-high 18 points. “That was definitely one of the most exciting games I’ve ever played in.”

More excitement was coming. Sayre defeated Sullivan County in the quarterfinals, but the Griffins returned nearly every player in 2017. They had the talent, but more important, Sullivan County now believed. And this dramatic victory provided the turning point.

“Last year when we played Bucktail we lost in overtime and I saw that exact scenario go through our heads,” Parrish said. “I told everybody we better not lose like we did last year.”

They did not. And they sure have not lost much since then.

Dan Solley had his interest piqued when he noticed the girls soccer coaching job at Loyalsock opened up. He even ...

The umpire stood behind the pitcher’s mound with his clicker in his left hand to track balls and strikes. On this ...