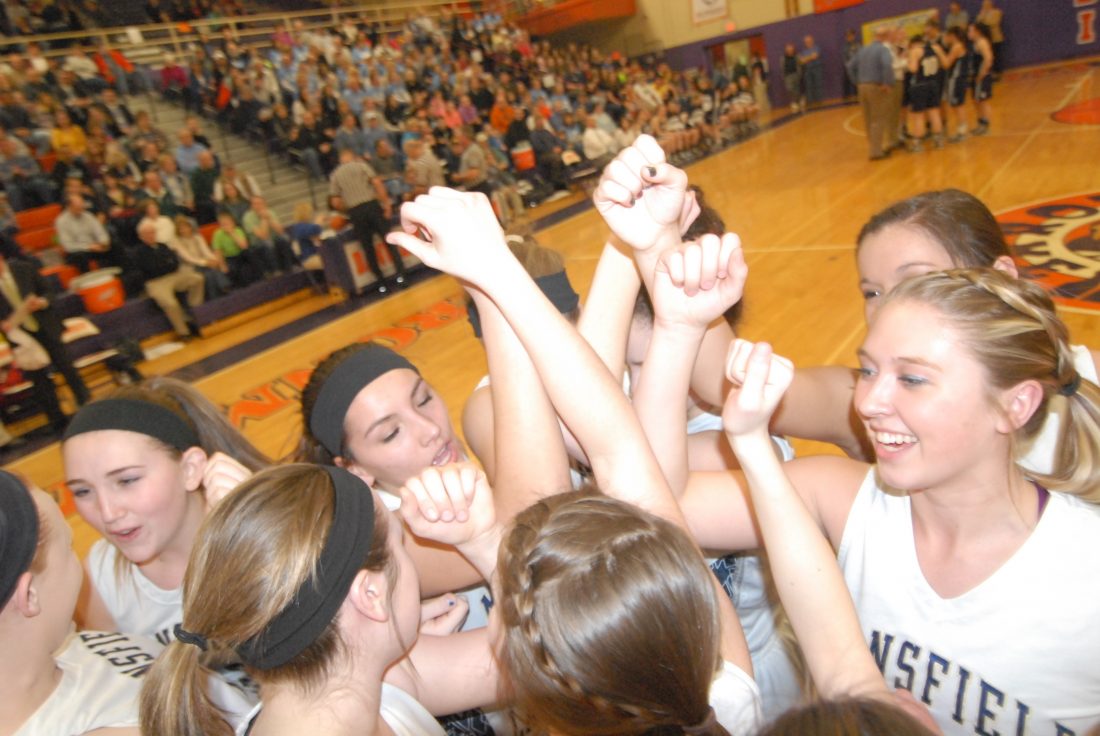 SUN-GAZETTE FILE PHOTO North-Penn Mansfield players celebrate with one another after beating Shenadoah Valley in the PIAA Class A playoffs in 2015. In the state opener that year, Mansfield had to rally back from a third-quarter deficit to beat Halifax, 46-42, in what was named the No. 5 best girls basketball game of the decade.

Winning its first District 4 Class A championship since 2006 was a grind. North Penn-Mansfield had to go to through perennial state title contender Lourdes and defending champion Millville, but fought hard and conquered both strong opponents.

So when North Penn-Mansfield met a Halifax team which returned a good core from a 2014 state quarterfinalist in its state tournament opener at Williamsport, it was well-prepared. The physical and intense game was nothing new for a team which had grown accustomed to them. It thoroughly enjoyed them at this point.

And again the Tigers prevailed.

North Penn-Mansfield made only 32% of its shots, but dominated the boards and played outstanding defense as it rallied from a six-point third-quarter deficit and defeated Halifax, 46-42, winning the program’s first state playoff game in nine years.

“I told the kids before the game you have to be ready to grind out long possessions and get stops and just keep working,” North Penn-Mansfield coach Jason Dominick said. “Our kids did that and they were awesome. It was a physical state playoff game and our kids didn’t fold. They embraced it and just kept playing.”

North Penn-Mansfield did that all season, topping 20 wins for a second straight year, winning the first of consecutive district championships, reaching the state quarterfinals and finishing 22-6. The Tigers were a complete team which featured two 1,000-point scorers and four players who averaged at least 8.7 points per game. Reserves like Emilie Dinan and Krissy Buchanan played well off the bench and provided depth.

The Tigers needed all those players to perform well against Halifax and they all did. Still, little came easy and the game was tied, 23-23, at halftime. Halifax guard Morgan Cox was a 1,000-point scorer and when she hit back-to-back 3-pointers midway through the third quarter, Halifax went up, 34-28. It appeared the taller Wildcats were seizing control, but the Tigers quickly thundered back and pulled within two entering the fourth quarter.

“We just have fun being competitive. I’d rather have a game like that than a blowout and our team rises to the challenges,” point guard Ali Hillson said after scoring a game-high 19 points. “Our whole mentality was don’t give up because we’re in this.”

Not only was North Penn-Mansfield in it, it had flipped the script in six minutes, turning a six-point deficit into a 42-36 lead two minutes into the fourth quarter. Garverick was sensational, scoring 17 points and grabbing 16 rebounds. Garverick was only 5-foot-7, but played like a 7-footer throughout high school and totaled more than 700 career rebounds. She was at her best on this day, repeatedly giving her team second and third-chance scoring opportunities with eight offensive rebounds.

North Penn-Mansfield finished with 17 offensive rebounds and a combination of defense becoming offense and that ferocious effort on the boards ignited the game-changing 14-3 run.

“I knew they had a couple big girls. Before the game I told myself to work on rebounds because Coach had told us we have to rebound well if we want to win,” Garverick said a week after scoring her 1,000th career points. “If it was my last game I could say I left everything out there and that’s what I wanted.”

Halifax also featured a group of tenacious players and did not flinch after North Penn-Mansfield went up six. The Tigers did not connect on another field goal and Kassidy Sorichetti scored four straight points to pull Halifax within 44-42 with 30 seconds remaining. After the Tigers missed the front end of a 1-and-1, Halifax had a chance to tie or take the lead, but Buchanan made the play of her life, blocking what looked like would be a sure layup. The ball went out of bounds and Halifax had another shot, but defensive stopper Alysa Davey-Bostic knocked a pass toward Hillson for a steal. Hillson made a free throw before switching places with her fellow guard. This time, Hillson knocked the ball to Davey-Bostic who clinched the win, making a free throw with 2.6 seconds left which put North Penn-Mansfield up, 46-42. Another nine-year drought was over.

“We just had to make sure the team kept its cool and make sure we’re doing what we’re supposed to do,” Garverick said. “I thought winning districts was a great feeling, but this is an even better feeling.”

It also was a typical North Penn-Mansfield performance. The defense swarmed and, although Hillson and Garverick carried, the offense, every player Dominick used made a positive impact. That included Buchanan and Dinan (7 rebounds, 4 blocks) who helped alter the game’s complexion with their defensive prowess.

The defense gobbled up another victim four nights later when North Penn-Mansfield stifled District 11 champion Shenandoah Valley and won its second-round game, 42-22. The Tigers were less than two minutes from reaching the state semifinals before Portage rallied late and defeated it in the quarterfinals.

Nevertheless, it was a fantastic season for a team which became the area’s first state quarterfinalist in 11 years. The Halifax victory showed exactly how North Penn-Mansfield made that run.

“That team was relentless and kept pushing back. We just kept playing hard and kept them away,” Hillson said. “We’ve had our ups and downs, but we’re just happy to come out on top in this one.”

“That was one of those games where most teams would have folded when they got down,” Dominick said. “We told the kids if they make a run withstand it, settle in and keep playing and you’ll win the game.”