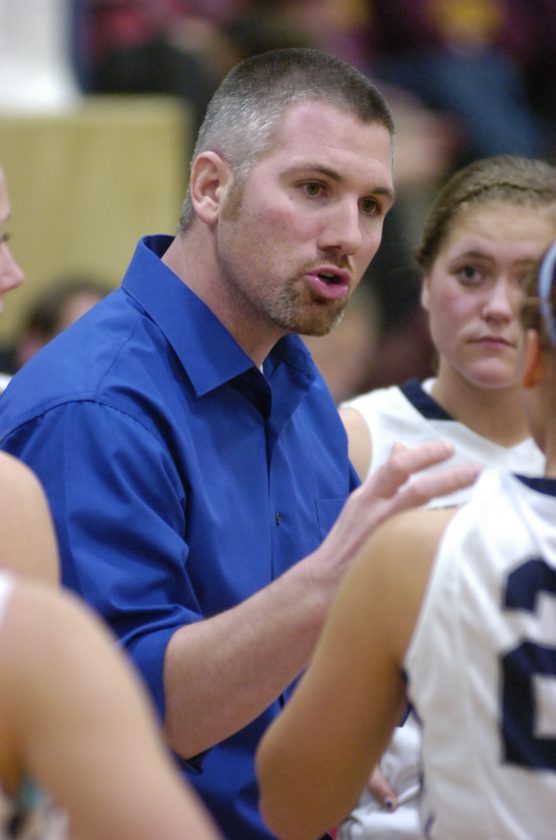 SUN-GAZETTE FILE PHOTO Craig Weaver Jr. talks to Muncy’s players during a game in 2014. The year prior, Weaver Jr. and the Indians beat a tall Williamson squad in a thriller, 48-44, in the District 4 Class AA playoffs.

Muncy reached the Class A state tournament in 2011 and 2012, ending a nine-year drought. But the Indians never had a shot at going for the Class A 3-peat.

They moved up to Class AA for the 2013 season, increasing the challenge in front of a team with just one senior and no player bigger than 5-foot-9. And in its first District 4 Class AA playoff game, Muncy faced a tall order.

NTL-West champion Williamson featured an imposing front line which included 6-foot-3 Lori Horton and 6-foot Kim Daugherty, both who had super seasons. Horton averaged 16 points, 16 rebounds and six blocks per game while earning the first of consecutive all-state honors. Williamson also was 17-5 and had won 13 of its last 15 games.

Muncy did not care. The new kids on the Class AA block felt underestimated and showed they had the tenacity to overcome both the bigger classification and the taller Warriors. It was not easy and Williamson led throughout the second half, but Muncy surged late and won a 48-44 thriller at Williamsport. The Indians parlayed that win into a third-place finish, reaching states again.

“We want to come out and make a name for ourselves,” Muncy guard Brianna McLaughlin said after scoring a game-high 15 points and igniting a feisty defense. “It’s our first game in Double A and we’re sort of underdogs because we’re a smaller school and it’s a good thing when you can fight for wins.”

Muncy had been doing that the two previous seasons and did not alter its expectations because of its youth in 2013. The Indians started 13-3 and McLaughlin and Jordan Jones formed one of the area’s premier backcourts. Crystal Good was a 5-6 forward playing like she was 6-6 and complemented her sister Charity inside while Gina Paisley effectively stretched the defense and played tough defense.

Muncy stumbled some down the stretch, going 3-3 but Williamson was surging. The Warriors won their first league title since 2001 and Horton, Daugherty and Cheyenne Jones all averaged 12.9 or more points per game.

It was an intriguing matchup in featuring Williamson’s height against Muncy’s speed and outstanding backcourt. It became quite an exciting one, too, with the lead changing hands 13 times, including five times in the fourth quarter.

Williamson opened the game’s biggest lead by five in the third quarter, but Paisley hit two key 3-pointers that quarter and helped Muncy tie it, 34-34, entering the fourth. She, McLaughin and Jones combined for 35 points, but might have been even better defensively, harassing Williamson’s guards and making it harder to get the ball inside. Muncy forced 23 turnovers and both Good sisters were strong inside, holding Horton and Daughterty to 21 combined points, 12 below their season average.

“Brianna and Jordan up front and Gina out there with them, with their speed and the way they played all year we knew we had a little advantage there,” Muncy coach Craig Weaver Jr. said afterward. “We really attacked that and had the girls going up and pressuring the ball as much as we could. Watching film, we knew where we had to be and the girls put themselves in the right spots.”

While Daugherty (12 points, 9 rebounds) and Horton (9 points, 14 rebounds, 7 blocks) were contained, they were not stopped. Daughterty scored inside and Horton added a free throw as Williamson went up 44-42 with 90 seconds remaining. Charity Good then made the play of her scholastic career and put Muncy ahead to stay. The senior forward rebounded a Jones missed 3-pointer that went in and out, shot it over Daugherty and drained the putback while being fouled. Good calmly added the free throw as Muncy went up, 45-44. McLaughlin forced a turnover on Williamson’s next possession, leading to a Jones free throw. McLaughlin came up big again on the next trip, pulling down a defensive rebound. Jones went to the line or a 1-and-1 with 17 seconds remaining. Williamson’s fans traveled well and the gym was mostly packed as the noise made it hard to hear. Jones blocked all that out and sank both shots, putting Muncy up, 48-44. The defense sealed he victory and the field’s smallest school had recorded quite a big win.

“It’s where we’ve been for so long. We’re little Muncy and we’re the underdogs, but I think we’ve made a little name or ourselves,” Jones said after scoring 11 points, dealing six assists and adding five rebounds. “It’s all of us. We just work so hard. I love my team. We work really well as a team and when somebody is not on, someone is picking somebody else up. It’s great.”

Muncy played great 10 days later against Lewisburg, a team which has competed in both the AAAA and AAA fields in recent years. Unlike the previous two seasons, Muncy had to win the consolation game to advance and it did so, utilizing all its weapons and playing smothering defense again in the 41-31 victory. The win was not as dramatic as the Williamson one, but together, they both meant a whole lot.

“The doubters were still there because people were still saying we wouldn’t do it and that’s what we used as our motivation because we love being an underdog,” Weaver said. “We used that as a driving force. When people tell you that you can’t, that’s when you drive harder and find out what you’re made of.”