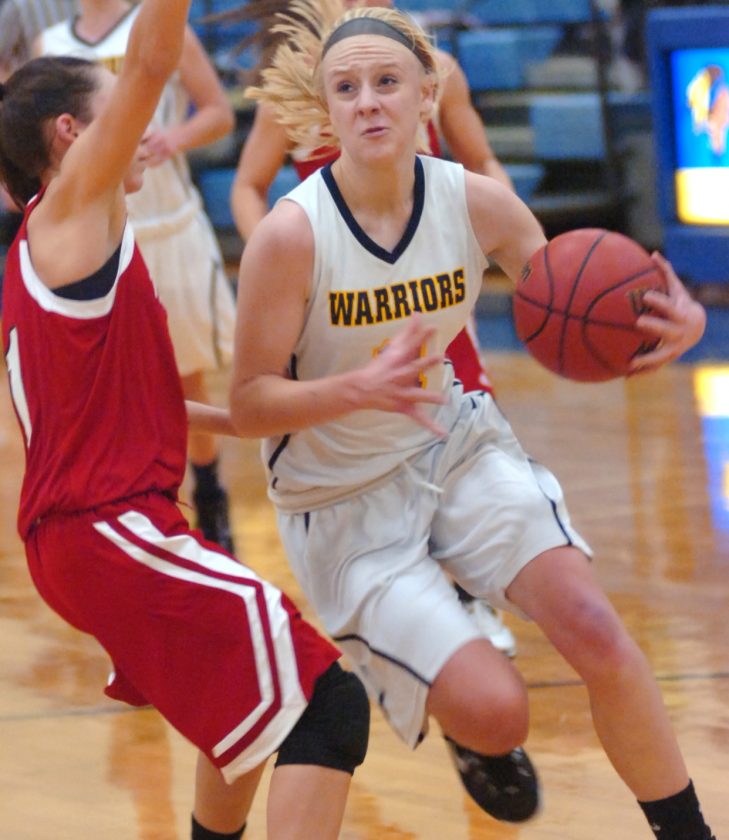 SUN-GAZETTE FILE PHOTO KIrsten O’Malley and Montoursville beat Mount Carmel in the postseason at Shikellamy in 2015 reach its first district final since 2000.

Mount Carmel has built one of the greatest District 4 girls basketball dynasties over the last 10 years. During that time the Tornadoes have captured nine district championships, including five straight at the Class AAA and AA levels. So dominant it has been that Mount Carmel has lost just one District 4 playoff game since 2011.

What Montoursville did that night at Shikellamy was impressive by itself. But the magnitude of the victory has grown significantly more with each championship Mount Carmel has won since. Mount Carmel has often treated the District 4 playoff field like the Washington Generals, but Montoursville took charge in the fourth quarter, held off a late rally and won, 55-50, while reaching its first district final since 2000.

“They’re the four-time champs, four or five, I don’t even know. But they have a dynasty,” guard Kirsten O’Malley said after scoring 14 points, making six steals and adding four assists. “It’s huge to beat them. Everyone’s always trying to (beat them).”

They still are. With no luck. But this night, this moment belonged to Montoursville.

This was a performance a year in the making, too. Montoursville had swept two close games from Mount Carmel in 2014 but a potential game-winning 3-pointer just missed and the Tornadoes defeated it, 42-40, in the district semifinals. Montoursville and Mount Carmel exchanged close victories in 2015, the road team winning each time in games decided by nine combined points. No team had won by more than seven points in two years so there was no reason to think this semifinal would be any different and it was not.

Montoursville opened a seven-point second-quarter lead but it was short-lived and Mount Carmel tied it 23-23 by halftime. The lead then changed hands six times in the third quarter with Montourvsille forging ahead, 35-32, entering the fourth. Amanda Arellano put Mount Carmel up again, 40-38 with 5 minutes, 9 seconds remaining. This was and still is when Mount Carmel is at its best, constantly finding ways to pull out close games against strong opponents.

But Montoursville would not let history repeat itself. Sophomore forward Marlene Bassett shined of the bench and scored six straight points, giving Montoursville a 44-40 lead it never relinquished.

“They knew what we did, we know what they do,” Montoursville coach Travis Heap said. “It’s one of those battles where it’s going to come down to the wire and I’m just proud that our girls stepped to the plate this time.”

Bassett was part of a stingy interior defense, combining with Kelsey Stine and Marissa Folk to alter shots and deny entry passes. O’Malley and Lexi Marchioni each made six steals and Marissa Hall swarmed as well. The Warriors slowed down Mount Carmel’s potent running game, received balanced scoring and pushed the lead to eight with just 1:20 remaining while capping a game-changing 12-2 run.

“We’ve been preaching defense since Day 1. Defense wins championships. You saw it tonight,” Heap said. “We made it tough for them.”

Mount Carmel being Mount Carmel, however, it would not go away. Future 1,000-point scores Maura Fiamoncini and Nicole Varano combined for 28 points and were part of a furious rally as Mount Carmel cut it two in the final minute. A lot of opponents had wilted in those situations but Montoursville was not like most teams. The Warriors clinched the game at the foul line, securing a 55-50 victory and a state tournament berth for the first time since that Kelly Mazzante-led team in 2000 had reached a second straight state championship. It also was the second straight year in which Montoursville had taken three games from Mount Carmel.

This was the high point for a strong class of seniors which had revived the program and which produced four straight winning seasons after Montoursville had endured nine consecutive losing campaigns.

The honor keeps being enhanced every time Mount Carmel wins another playoff game. The Tornadoes have won 15 straight playoff games since that Montoursville defeat. Beating Mount Carmel in districts has been like trying to crack the Da Vinci Code.

Montoursville’s Code Breakers did it. The Warriors went 22-4 that season and the seniors produced 65 victories in four years.

This is their legacy game and what a game it was.