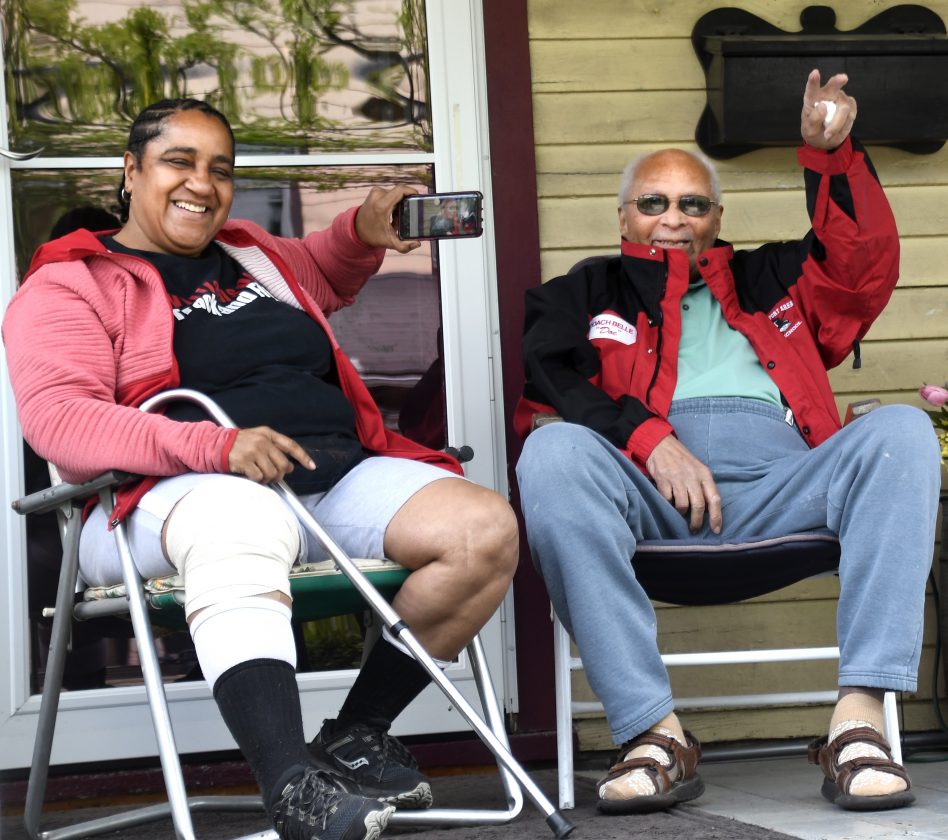 Some honked feverishly. Others hung out car windows holding signs. One person popped streamers as they passed.

Williamsport track and field coach Sam Belle sat on his porch the whole time surrounded by his family with that picturesque smile which has never changed painted across his face. He raised his hand to wave every so often, but his smile was permanent.

Dozens of cars passed in front of Belle’s home Thursday afternoon in Williamsport. The man who has devoted 53 years of his life to teaching and coaching track and field at Williamsport has been battling health issues. Millionaires track coach Jeremy Steppe raised the idea of bringing a parade past Belle’s home to show support for Belle.

But as he organized the event, he never imagined it would get the traction it has. His initial posting on Williamsport track and field’s Facebook page had been viewed more than 20,000 times since it went up less than a week ago.

“Whenever he would have an issue with his health, track was what would get him through it,” Steppe said. “Track is what he lives for. So I thought if we could get the boys to come by and say hello and wave to him and let him know we’re thinking about him that it would help pick him up.”

But Steppe never expected it to get as big as it was. His initial Facebook post drew hundreds of replies. The parade itself drew people across multiple generations of athletes. The Keller family showed up because they had a parent who went to school with Belle. And on the back of the sign they carried was a black and white picture of a young Belle.

Owen Mahon, who missed his senior track season this spring because of the COVID-19 pandemic said it was a no-brainer for he and his friends and teammates to show up. He said the track team is more a family than it is a team.

“He’s put so much time into us and it’s time for us to put time into him and let him know we’re here for him,” Mahon said. “I hope it lifts his spirits and gives him strength and helps him pull through. He’s got an army behind him and I hope this helps him feel stronger.”

Now 86 years old, Belle has given up being the boys track coach, but he maintains a role as a volunteer assistant. It allows him to focus on the throws and jumps, which are his areas of expertise, Williamsport athletic director Sean McCann said.

The interest in the parade grew so large that Steppe reached out to Williamsport mayor Derek Slaughter to give him a heads up about what would be happening on Cemetery Street in the afternoon to make sure it didn’t disrupt the daily traffic flow. Cars drove up to the front of Belle’s house where they’d shout their love from the window. Each one elicited a new reaction from Belle’s niece, Marguerite Anderson-Royal, who sat by his side the entire time. And with each sign, each honk and each well wish, Belle’s smile grew wider.

“To me, he’s number on in my heart and number one in my wife’s heart, and our sign says that,” said Jim Burget, who had Belle as a teacher in the 1970s before eventually coaching with him. “He has a piece of everyone’s heart who is here.”

“He deserves any accolades he gets,” McCann said. “He’s worked so hard and given so much to this school and the community and the kids. It means a lot to me to be here and to be able to honor him and watch everyone honor him, too.”