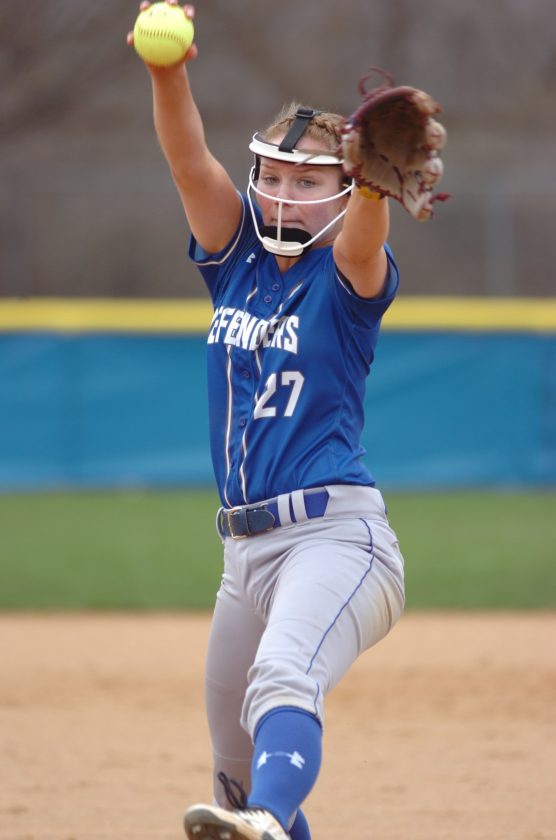 SUN-GAZETTE FILE PHOTO Warrior Run's Madi Waltman committed to play softball at Lock Haven University and major in biology. She was a standout pitcher for the Defenders from 2017-19 and ended with over 500 career strikeouts.

The Bald Eagles will look to keep up that great pitching success as Warrior Run’s Madi Waltman committed to continue her athletic career at Lock Haven and plans to major in biology.

“During my recruiting process, Lock Haven definitely sparked my interest because the coaches are the kind of coaches that don’t really take it easy on you,” Waltman said. “And they’re the best kind of coaches for me.”

The Lock Haven softball Twitter account tweeted, “Excited to have Madi repping the crimson and white next season!!” Thursday afternoon.

Watson, Waltman’s softball coach during her career at Warrior Run, spoke highly of her during the announcement.

“(Lock Haven is getting) an outstanding athlete. The character that the young lady has, it’s just unbelievable, on and off the field,” Watson said. “(She’s) a great student. Set the athletics aside, she’s just hard working and the first one there, last one to leave. She’s the whole package. What Lock Haven’s gonna get from her is just unprecedented.”

Waltman helped the Defenders reach the postseason all three years she played, and the last two seasons they reached the second round of the state tournament. In the circle, Waltman went 38-15. Her ERA continued to increase with each season. As a freshman, she had a 2.80 ERA. It went down to 1.76 her sophomore year and as a junior, she had an impressive 1.09 ERA.

Waltman ended her career with 545 strikeouts, 314 of which came last season.

Like all spring athletes, Waltman never got a chance to continue her great career at Warrior Run and possibly win her first district championship. But regardless, what Waltman accomplished in her three years caught the eye of Lock Haven University.

“What Lock Haven’s getting at the plate with her, she most definitely would have broke the school record for hits. Just a tough cookie,” Watson said. “The girl put a lot of time in with her father and to get that type of kid, just says a lot. … She goes down as one of the all-time greats that was able to come through the program in the time that I’ve been able to coach kids.”

Lock Haven was 6-10 this past season before the coronavirus pandemic forced the cancellation of spring seasons in high school and college. Jada Schellhammer led the team before the cancellation of the season with a 6-3 record and 3.23 ERA. She’ll be a sophomore next year, giving the Bald Eagles a talented 1-2 pitching combination with her and Waltman. The team brings back Kinley Gioglio, who will be a sophomore in 2021, and Amanda Criss and Madalyn Dydynski, who both will be juniors.