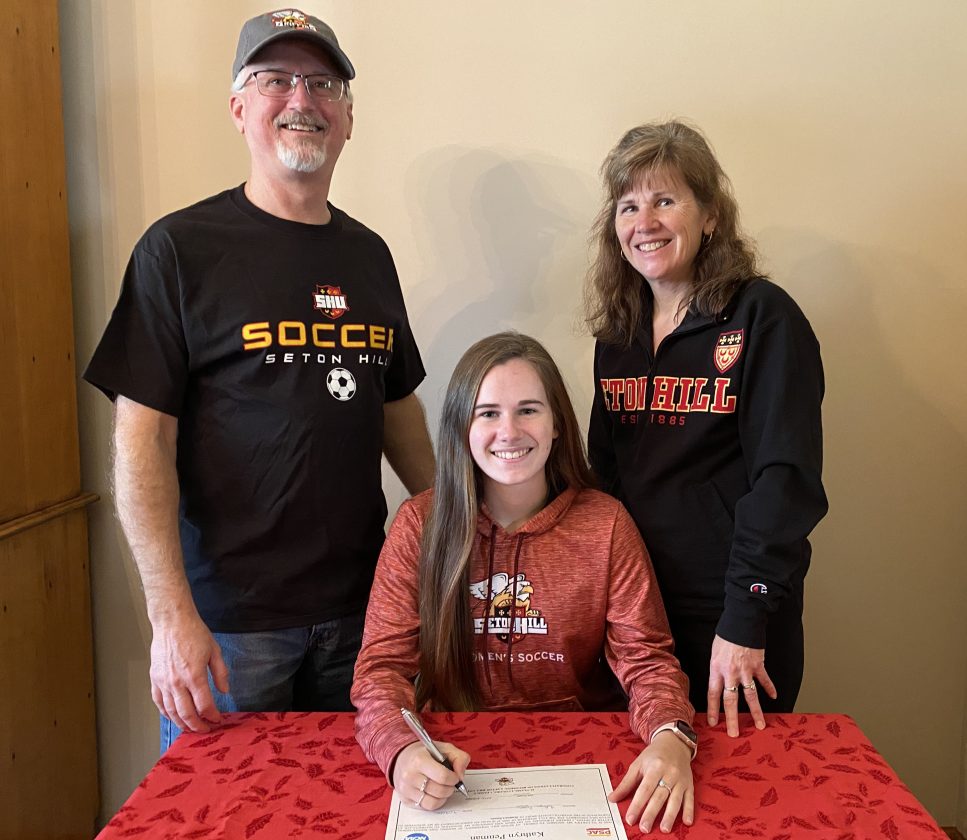 PHOTO PROVIDED Williamsport’s Katie Penman signs her letter of intent to play women’s soccer at Seton Hill. Standing are her parents. Penman is graduating from Williamsport a year early to enroll at Seton Hill this fall.

Katie Penman was ready for a new change and a new challenge. While she was an extremely talented soccer player at Williamsport High School for her three years there and a great student, Penman felt it was time to take the next step.

Being only a few credits away from graduating, Penman decided to graduate from Williamsport early and begin her college career this fall.

Penman will continue her playing career at Seton Hill for the women’s soccer program this fall, leaving Williamsport after a stellar three-year career.

“Academically, I have the credits needed to graduate. I think it’s more beneficial to start college classes early rather than staying in high school another year taking classes I didn’t need,” Penman said of her decision.

“Williamsport does a great job of preparing students to only need two or three credits that are necessary to graduate by their senior year,” Penman said, noting that she took 18 college credits online through Lock Haven University. “I took some of the dual enrollment classes during the summer and some during the fall and spring semesters of my sophomore and junior years.”

Penman will leave an enormous hole for Williamsport to fill. She became the program’s all-time leading scorer in just three years with 61 goals, and had she played her senior year, would have easily reached 75 for her career.

“It is a bitter-sweet feeling knowing I won’t come back to play my senior year of high school soccer. Of course there are aspects I am going to miss, but I am ready for something new and exciting,” Penman said. “I am so grateful for the time I had playing at Williamsport, but I am very enthusiastic to start my career at Seton Hill.”

Penman has an impressive resume in her three years. She was a first-team Heartland all-star forward all three years, an all-state forward her junior season, a three-time Sun-Gazette all-star selection, the 2019 Sun-Gazette Girls Soccer Player of the Year and was named to the Sun-Gazette all-decade team as a forward of the 2010s.

What memory sticks out to Penman the most during that span?

“What stands out most for me is how much love I gained for the game of soccer. I was able to break records because I had a desire every time I stepped on the field to be a better player,” Penman said. “I wouldn’t have been able to enjoy the game as much without my best friends as teammates and great coaches on the sidelines. I love the relationships I was able to form because of high school soccer.”

Penman is the only player in Williamsport history to score 20 or more goals in a season twice and she holds the single-season record for goals scored with 25 last year. She’s also one of just three girls players in the 50-goal club at Williamsport, joining Vanessa Wright (2002-05) and Sara Redka (2003-06), who both had 52.

The speedy forward first visited Seton Hill last June for an ID clinic. That’s where she hit it off well with Seton Hill’s women’s soccer coach Zak Kruger. While Penman did look at other colleges to play, she kept going back to Seton Hill, where she ended up committing and will attend.

“The campus is beautiful and everyone there is very caring and helpful. I was impressed with one-on-one communication I had with the department chair in my major and my coaches,” Penman said. “It feels like a family.”

Ask any player in girls soccer last year who was the fastest player in the area to try to contain and shut down and most likely Penman’s name will be the first they tell you. And while Penman is extremely fast and talented as a shooter, Penman sees her soccer IQ as her biggest asset, not necessarily her speed.

Penman’s speed though will definitely be a huge advantage for the Griffins this fall, and Kruger knows that.

“My coach has said that he wants to be able to play a faster pace game of soccer,” Penman said. “As a forward, I think my speed and shooting accuracy will definitely be able to help the Griffins.”