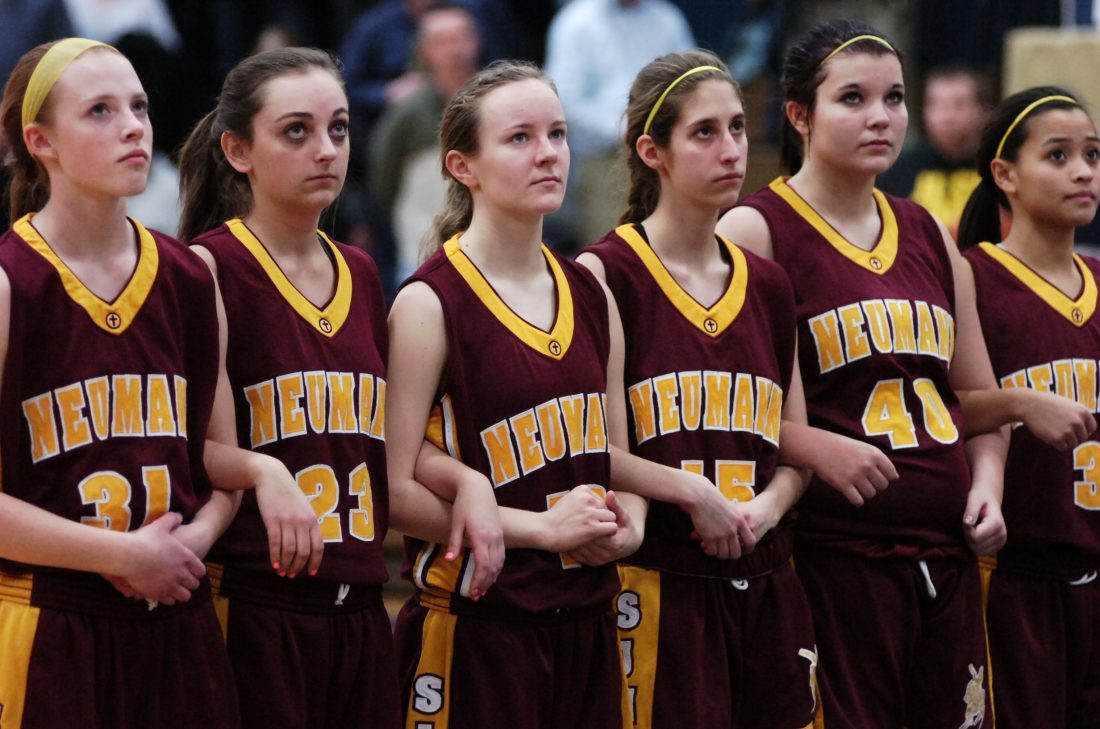 SUN-GAZETTE FILE PHOTO Members of the St. John Neumann girls basketball team lock arms during the national anthem prior to a game against Muncy in 2014.

No St. John Neumann player stood taller than 5-feet, 7-inches. Only one played college basketball. This was not the most athletic or quick team.

Still, time after time, Neumann beat more talented teams and put together a memorable 2014 campaign which culminated with the first state tournament berth and state playoff win in program history.

Neumann was supposed to be just a step for 2011 and 2012 Class A champion Steelton-Highspire as it climbed along its way to another deep tournament run. The District 3 champions were tall, deep, experienced, and had pummeled District 4 opponents in consecutive state tournament openers by 78 combined points the two previous seasons.

But this powerhouse program met its match against the little team from a little school with big hearts and relentless competitors.

Neumann earned the top spot on this list not just because it won in thrilling fashion, but because of who it beat and how it did so. The Knights rallied from a second-half deficit, went ahead to stay on Baylie Gerrity’s last-minute basket, and secured a program-defining 51-49 win to send shock waves throughout the state.

“I felt we could do it. We just had to put forth the effort to do it,” sophomore guard Megan Helminiak said after scoring 13 points. “It doesn’t matter what size the other team is. If you work together as a team you can accomplish anything.”

“We’re not as big and we’re not as nearly talented as some of the players we go against but they never back down and they never give up and it’s paying off now,” Neumann coach Steve Sholder said. “I don’t know how many times I’ve told everybody we walk in against is bigger, stronger and deeper, but nobody has more heart than you do. I think finally they have bought into that and realized we can beat anybody.”

Sholder had drilled that into his players’ heads since becoming Neumann’s coach in 2008. Sholder built upon what Dan McNamara had done during a successful run throughout the 2000s and the foundation for this 2014 campaign was laid when Meghan Trenholm and Emily Sholder arrived as freshmen in 2010. Both became 1,000-point scorers with Trenholm twice earning all-state honors. Just as importantly, they became fantastic leaders, setting a determined tone with their non-stop hustle. Fellow seniors Stephanie Fernandez and Rachel Danneker provided those qualities as well. The emergence of Helminiak and Gerrity as sophomore weapons helped Neumann enjoy its best season in 2014.

The Knights went 15-7 during the regular season, but were seeded fifth in districts and faced a tough task, traveling to play Sayre, a 2013 finalist. In a preview of things to come, Neumann flourished as the underdog and beat Sayre, 41-30. After losing to eventual champion Millville in the semifinals, Neumann played one of its best games and hammered Mansfield, 63-46, to clinch its first state tournament berth. Mansfield won the next two district championships and won 20 games that season as Neumann again made a big statement.

Few outside its locker room thought it had a chance, but Neumann immediately showed it was there to fight and built a quick 9-2 lead. The Rollers settled in soon after and its depth started making an impact as it built a 26-22 halftime lead. Neumann used only six players that day and was at a significant height disadvantage. But the Knights persevered. Sholder switched defenses in the second half, going from a full-court press to a zone defense, packing it in and daring the taller Rollers to beat them from outside.

The move paid dividends and Neumann tied the game, 41-41 after three quarters. Emily Sholder and Trenholm led the way, combining for 32 points. Sholder played one of her best high school games, scoring a game-high 17 points while adding eight steals and five assists. Trenholm grabbed 12 rebounds to go along with her 15 points and six steals.

Neumann repeatedly harassed Steel-High’s guards and all six players made big impacts as the fourth quarter became a battle with neither team giving any ground. Helminiak put Neumann up 48-47 with 1 minute, 13 seconds remaining, but Steel-High quickly answered and went up one. Gerrity had played a big game against Mansfield and displayed a knack for playing her best in Neumann’s biggest games.

She delivered again at the most crucial time, getting inside and hitting the game-winning basket with 33 seconds left. Trenholm added a free throw a possession later and Neumann’s dogged defense prevented Steel-High from tying it.

The dream had become reality. Neumann had arrived on the girls basketball scene and produced the most thrilling and biggest win in program history, winning, 51-49.

“Just thinking back to when we were in our John Bower days, I never would have thought we would be in the state tournament right now,” Emily Sholder said. “It feels good to be an underdog and have people not expecting us to do what we did and underestimating us and then proving them wrong.”

Neumann nearly did it again four nights later, taking a second-half lead before dropping a 49-41 second-round contest against budding state power Jenkintown. Obviously, Neumann wanted to keep winning, but it needed no more victories to enhance its legacy. No Neumann team before them and none since has reached a state tournament. But this team showed why and how it could happen again.

“Being part of a team to make it this far is pretty amazing,” Helminiak said. “It shows that even if you’re from a small town you can do anything.”

“We’ve had a lot of support from students and fans,” Emily Sholder said. “It will be good to know that we’ll be remembered here.”

And they’ll be remembered as the program’s best team ever.