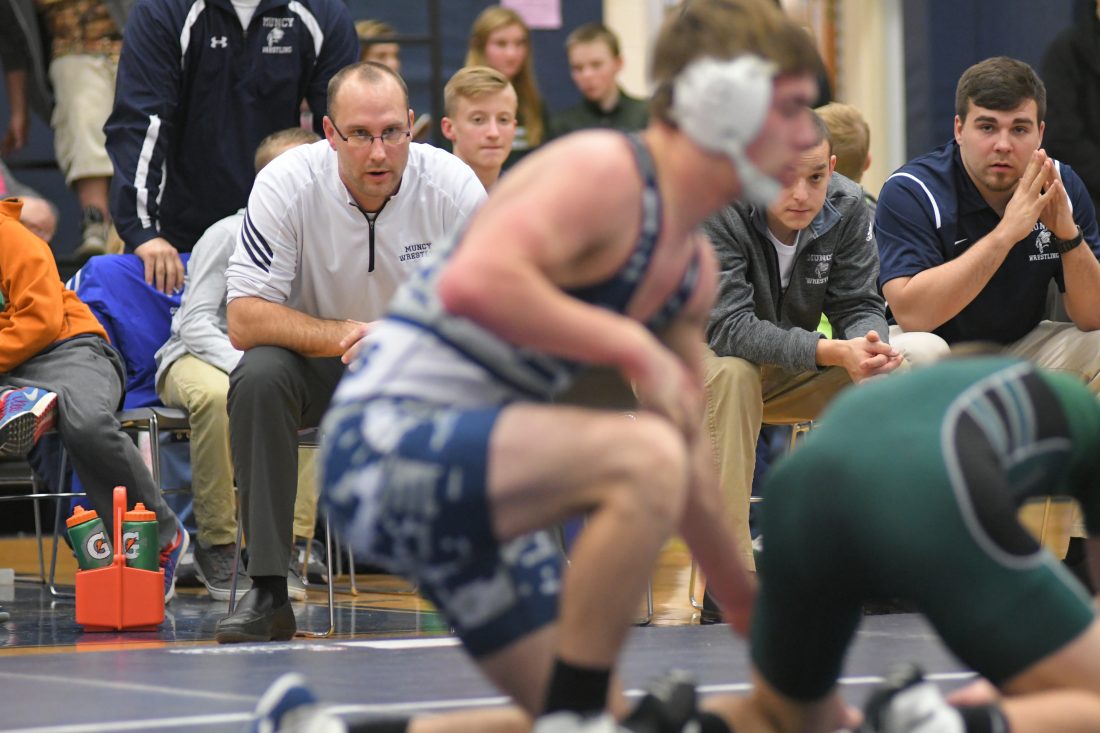 SUN-GAZETTE FILE PHOTO Denny Harer coaches during a dual meet between Muncy and Hughesville in 2017. Harer was hired to be Motngomery's new wrestling coach Tuesday.

Tuesday night, the Montgomery School Board approved Harer as the next varsity wrestling coach for the Red Raiders by an 8-1 vote. Jon DeSantis was the only board member to vote no. Harer was hired at a salary of $4,100 for the season.

Harer replaces Kyle Mowrey whose contract was not renewed following a 6-5 season in which the Red Raiders qualified for the District 4 Duals. Mowrey was 49-78 in seven seasons at Montgomery, coaching a pair of state medalists.

Harer accumulated a 231-88 record coaching at Muncy. He coached 23 state qualifiers and 16 state medalists with the Indians, including a trio of state champions (Zach Strickland, Ryan Hembury and Joe Klock). Strickland and Hembury’s state titles in 2011 snapped a 55-year drought at Muncy without a state wrestling champion.

Harer was a two-time state placewinner for Montgomery, taking second place at 145 pounds in 1993 and third place at 152 in 1994. He is still the Red Raiders’ career wins leader with 127.

He takes over a program which has had just six state placewinners this century. Although the cupboard is far from bare. Devon Deem is a two-time regional qualifier who has won more than 60 matches in his first two seasons, falling a win shy of the state tournament each season. Harer has coached Deem at the Buffalo Valley Regional Training Center at Bucknell.

Kaide Drick is a returning district qualifier who won 28 matches this year. Hunter Leet, Ben Marino, Colby Puderbach and Blake Snyder all qualified for districts this year, and Bradley Leon went 25-11. It’s a far better situation than when Harer took over the Muncy program in 2005 in which he had to rebuild the program from the ground up. The Indians eventually had a state medalist in each of Harer’s final 11 seasons.

The program will have at least two new wrestlers this season as Harer’s sons, Conner and Brandt, are planning to enroll at Montgomery. The two have combined for 15 Pennsylvania Junior Wrestling state medals, including seven state championships. Conner will be a freshman this fall.

Former four-time NCAA qualifier for Bucknell, David Marble, is planning to join Harer’s staff as a volunteer assistant, as is two-time Greco-Roman Olympian Ben Provisor, who is currently a resident athlete at BVRTC.

“Here, we’ve already got kids out for the program,” Harer said. “The elementary program is thriving. Our numbers are low at the high school level, but that’s our job to get them out.”

Harer left Muncy after his contract was not renewed by the school board in 2018 following a season in which he guided the Indians to a fourth-place finish at the PIAA Team Wrestling Championships and helped Klock win his state title. Accusations of allowing the use of saunas, sauna suits and diuretics, along with ignoring instructions from medical professionals caused the Muncy school board not to renew his contract. Harer is currently involved in a defamation lawsuit against the Muncy school board.

“I can’t really speak about that, but it’s behind us,” Harer said. “We’re moving forward.”

Harer has no doubt he can help the program get to that level.

“I believe I’m good at what I do and I surround myself with people who have the same thought process that kids can buy into,” Harer said. “We want kids in there who want to be better. When we walk into a gym, I want people to know that we’ve come to wrestle. It’s all about peaking at the right time and getting on the podium and winning medals. They have the talent here to do that. My job is to help them get there.”