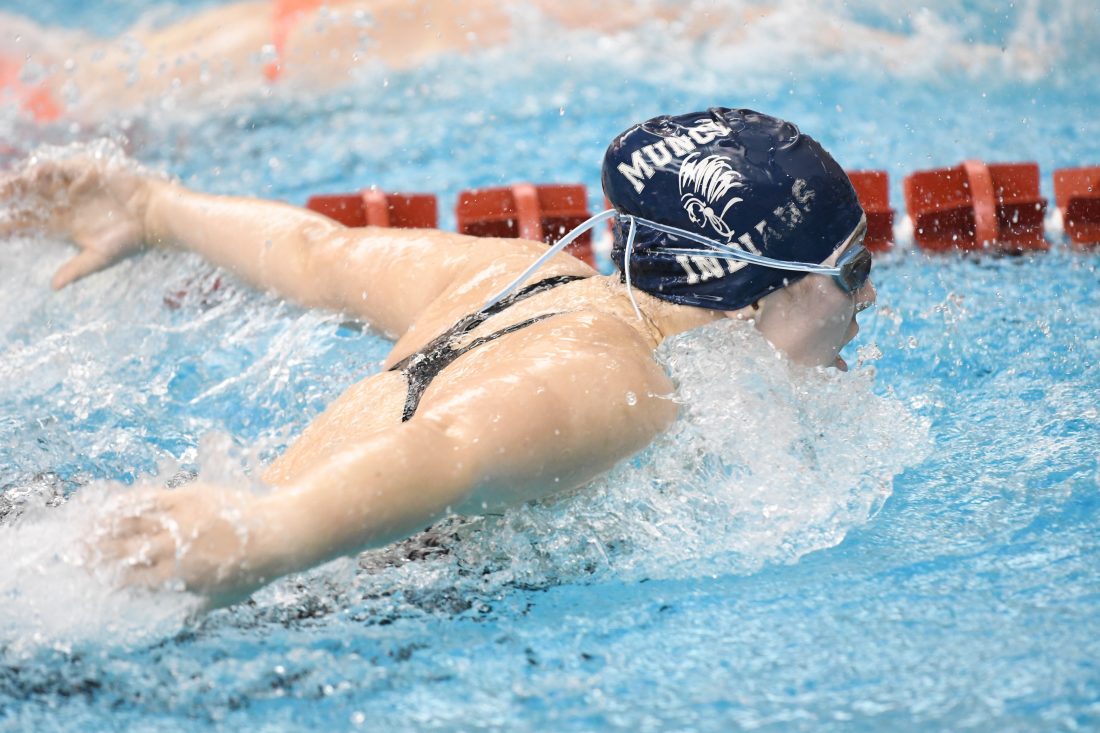 SUN-GAZETTE FILE PHOTO Muncy's Maddey Brelsford heads for the finish to place fourth in the 100 fly during the District 4 swimming championships at Williamsport in February. Brelsford, who swam independently with Muncy, is a seven-time district medalist and will swim at Elizabethtown College this winter.

So a life without swimming seemed like a foreign concept to her and probably one she didn’t want to have to think about. That’s why she was more than happy to be able to continue swimming at the college level.

Brelsford will be swimming for Elizabethtown College this winter as she plans to major in occupational therapy. It will allow her to obtain a doctorate degree in six years thanks to Elizabethtown’s program.

“I’m super excited to swim. I’m excited to have a new coach and new dynmaic with my teammates,” Brelsford said. “The Division III league tends to be really close too, and I’m sure I’ll end up seeing people I saw throughout high school. Swimming is a very close-knit community. I competed with same group of people since I was six, so we all grew up together. I’m excited to make new friends at college level.”

Brelsford has been swimming independently for Muncy all four years of high school. It means she doesn’t have the benefit of a home pool and a normal swim schedule for competition. Her winters the past four years consisted of swimming at Williamsport’s home meets, a handful of meets at Bucknell and various league meets.

“It was tough because I didn’t have a close team bond,” Brelsford said. “That was another big reason why I wanted to swim in college because I missed that close high school team experience.”

Brelsford competes in the 100 back, 100 fly and occasionally mid-distance events. She ended her career as a seven-time district medalist. Brelsford placed sixth in the 100 back as a freshman, fifth her sophomore and junior years and fourth as a senior. In the 100 fly, she placed fourth as a sophomore, junior and senior.

“I always loved swimming and I like the independent aspect of it and also I like the team aspect. I experienced that more with my Y team, but I just like how I can keep getting better and better and the satisfaction of dropping that time more and more every year,” Brelsford said. “There’s always room for improvement and improvement shows in those times and it’s immediate feedback. I really like that. It helped that I’m really competitive. A lot of swimmers are really competitive.”

That competitivenes is sure to be shown when Brelsford competes in her first college race against talented teammates and other college swimmers. As an independent swimmer in high school, Brelsford’s thankful that she has the opportunity to continue competing in a sport she’s grown to love.

“It’s always been (rewarding). I’ve been swimming since I was six, so I can’t imagine not swimming,” Brelsford said. “I’m thankful I can still swim in college and I’m thankful that Williamsport and Muncy provided me with an opportunity to swim even though I didn’t have a team.”

Brelsford will have plenty of competition to vie for a spot in the starting blocks. Elizabethtown returns seven swimmers who compete in either the butterfly or backstroke, and all but two are underclassmen. The Blue Jays went 5-6 last year and placed sixth at the Landmark Conference swimming and diving championships in Boyds, Maryland.

Elizabethtown had four swimmers compete in the 100 fly at the Landmark Conference championships, three of which will return. Brelsford’s PR of 1:01.35 in the 100 fly would have just missed being in the finals. It also would have been the highest time for an Elizabethtown swimmer, besting Robin Hill’s seeded time of 1:03.39.

In addition, her PR in the 100 back would have been the best for an Elizabethtown swimmer, beating Olivia Eason’s preliminary time of 1:06.08.