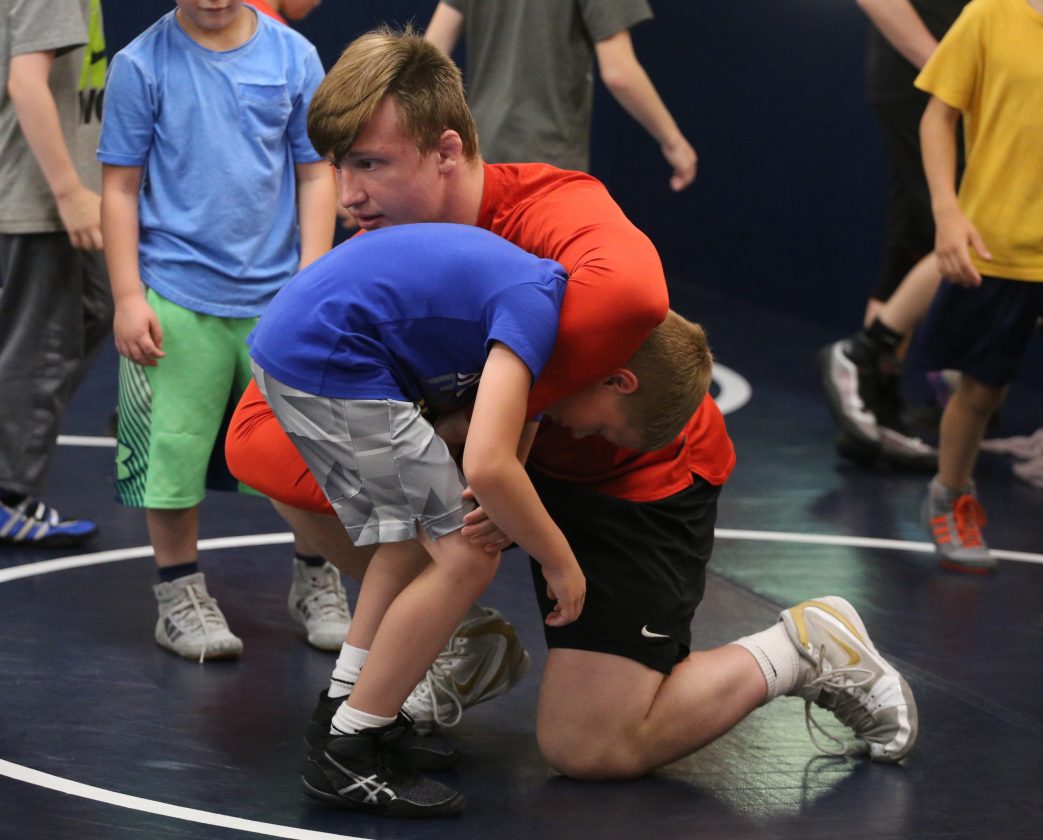 KAREN VIBERT-KENNEDY/Sun-Gazette Ohio State wrestler Gavin Hoffman, a Montoursville graduate, teaches some of younger wrestlers during a clinic at Ride Out Wrestling Club in Montoursville on Wednesday.

It looked like Cael Crebs had the position he needed as he drilled with Sammy Sasso. Crebs was taking the Ohio State star to his back and, in one felled swoop, ended up on his own.

Crebs, who is coming off a third-place finish at the state tournament for Montoursville last winter, just smiled. He knows it’s that kind of scrap which is going to make him a better wrestler. So he got back to his feet and went after Sasso again.

Sasso is in Montoursville all week putting on a clinic at the Ride Out Wrestling Club along with fellow Buckeye and Montoursville graduate Gavin Hoffman. Crebs was there Wednesday with several Warrior teammates and got a first-hand account of what it’s like to scrap with Sasso, a two-time PIAA champion at Nazareth who finished the year ranked second at 149 pounds by FloWrestling.

As Dominic Lincalis kept time during the alternating 90-second live wrestling portion of Wednesday’s workout, Sasso, Hoffman and Indiana’s Garrett Hoffman took turns scrapping with some of the high school and elementary wrestlers on hand. Garrett Hoffman noticed one boy didn’t have partner to wrestle with and popped up to his feet quickly, shaking the young wrestler’s hand before engaging and giving his opponent a chance to hit some of the moves they had talked about earlier in the day.

At one point, Gavin Hoffman gave up a takedown to a young wrestler who was smaller than either of his legs only to have another wrestler jump on his back and help his friend finish the takedown.

This week’s clinic isn’t just about teaching wrestling, and there’s plenty of that going on. It’s also about developing a love for the sport and giving back to the sport which has taken the clinicians to some of the highest highs of the sport.

“There’s so many people who spent countless hours with me when I was young,” Gavin Hoffman said. “Carl Lutz would take us to every tournament and would coach us when we were kids. Then I had Ian Assael who ran a great Bison Legend club. These kids deserve someone that can show them the way and they deserve to have someone they can look up to and strive to be better than.”

“I think it’s really big for us to be here to try and give back,” said Sasso, who was the third seed at 149 pounds in the NCAA tournament before it was canceled in March. “I’m taking it easy on some of the young kids, but then you’re beating up some some of the older kids because I’ve had those ‘ah-ha’ moments where a college kid came to your high school room or a high school kid came to your middle school room. It helps keep you hungry to get where you want to be.”

Following a water break midway through the day’s clinic, Sasso gathered the campers in a semi-circle on the mat and not an eye veered from him as he demonstrated a sequence of moves with Garrett Hoffman. He commanded the attention of the group there to learn something new, and then he went out and showed them how to do what he was talking about.

Sasso and the Hoffman brothers are the latest college wrestling personalities to give a camp at Ride Out. Former Ohio State All-American Micah Jordan gave a camp at the Montoursville club just a couple weeks ago.

“We’re getting the chance to wrestle with the best the country can give us,” said Montoursville state champ Branden Wentzel, whose dad Mike a co-owner of the club. “I don’t know how he gets these guys here, but it’s crazy how he reaches out to people and they take the time to come here.”

Wrestling with the younger kids was about providing a memory along with some instruction. Wrestling with the high school wrestlers in the room was about showcasing their own abilities for the Hoffmans and Sasso. Each time it looked like the high school wrestlers had an angle or had gotten to a leg, the college guys quickly let them know they didn’t and managed to finish on top.

“You don’t get many opportunities to do something like this,” Muncy’s Ty Nixon said. “During the season you don’t get to wrestle guys like this often, so you have to put yourself in this position right now and it’s going to make you that much better during the season.”

“I got Sammy once. But every time I got in on a shot – and I’ve got 50 pounds on him – he feels like he’s a 185-pounder. He doesn’t look strong, but he’s pretty strong. And getting a feel for that kind of style is going to help me.”