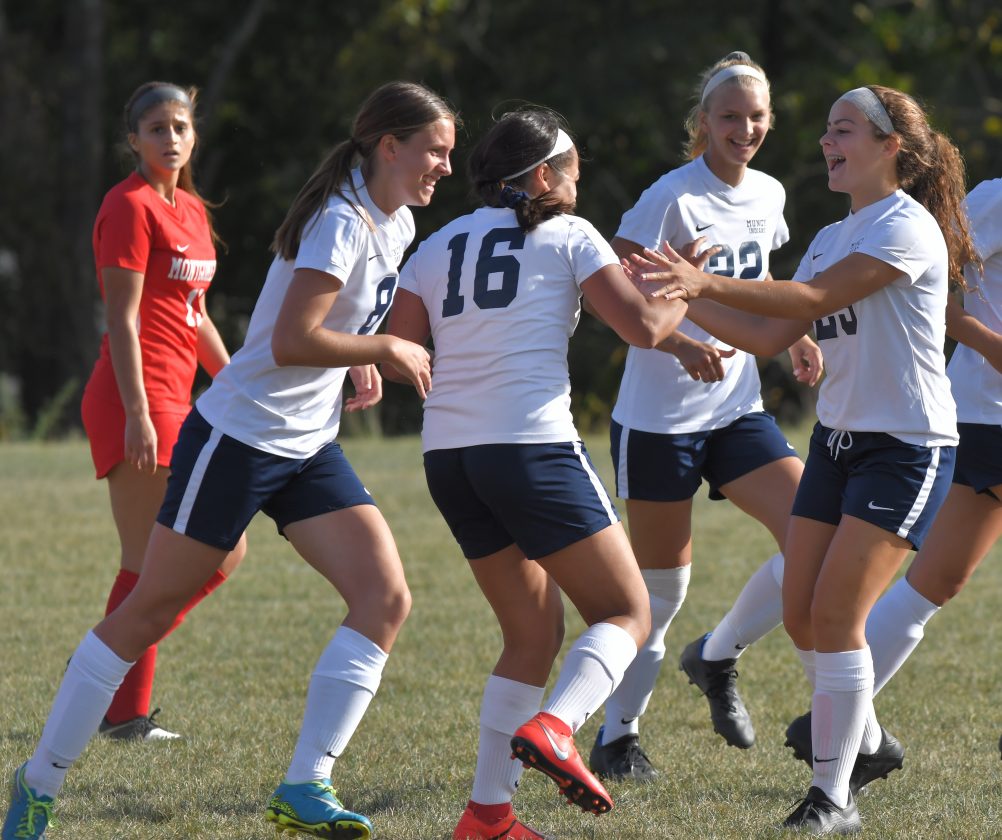 SUN-GAZETTE FILE PHOTO Muncy girls soccer players celebrate with each other after scoring a goal against Montgomery during a game last fall. Gov. Tom Wolf released guidelines for high school and college sports regarding practices and games. The guideline outlines how schools can practice with proper precautions.

For the first time since the middle of March, Montoursville football coach JC Keefer has a glimmer of hope there will be a football season come the fall.

Although there are still steps schools have to take before high school teams can return to offseason workouts, Wednesday’s Return to Play guidelines released by Gov. Tom Wolf with PIAA approval at least finally allows for some optimism regarding fall sports.

As mandated by the PIAA and Wolf’s release, school districts still have to produce a plan of how handle the safety restrictions involved with the COVID-19 pandemic and that plan must be approved by local school boards. But as soon as those plans are in place, the PIAA has given schools and teams the OK to begin offseason voluntary workouts.

Of course, as was emphasized by PIAA Executive Director Dr. Robert Lombardi in multiple interviews Wednesday, the workouts still must fall within the guidelines of what is allowable by PIAA rules. But for coaches like Keefer and Loyalsock’s Justin Van Fleet, they’ve already had plans in place for social distancing and limiting the number of students they’ll have working out together whenever they’re allowed to return.

“Because of our numbers, we’re almost already in a spot where we have to break things down in the summer,” Keefer said. “Our coaches, then in the anticipation of some type of restrictions, have prepared for when we’re given the go-ahead. So we can say here’s how we’ll do it. We’ll break into a group which is inside lifting and have other people out on the field.”

“I think everybody is excited to get back together,” Van Fleet said. “Things are going to be different. It’s going to take some adjusting in terms of mentalities, but that’s part of the new process.”

Williamsport boys soccer coach Lee Kaar has been hearing from his players who are anxious to get back to the field to begin summer workouts. Usually following the Millionaires’ graduation, Kaar has held voluntary workouts two or three times a week at the Balls Mills Soccer Complex. But like every other PIAA team, they’ve been at a standstill since the middle of March.

And while Kaar is excited to see steps are going in the proper direction to get teams back on the field, he wants to make sure all the precautions necessary are in place before bringing everyone together.

“I think we’re all anxious to get back to what we know and our comfort level with playing soccer and training,” Kaar said. “But we also have to keep in mind the No. 1 thing at this moment is the kids’ safety. I’ll never put myself in a position where my eagerness to get back to the complex trumps kids’ safety. Even when we are back up, we’re going to have guidelines. So even in the green phase, there’s a lot of things we have to consider.”

The added requirements by coaches and trainers to make sure student-athletes are symptom-free when the show up to practices or competitions is just another thing in a long list of items coaches will have to be on the lookout for. In the past, there have been guidelines on coaches to watch out for concussions and heat-related issues.

Screening each student-athlete as they arrive for games or competitions is just a new practice which will take some getting used to for coaches. But Van Fleet and Keefer agreed it isn’t going to be a major adjustment.

“But it’s not just about the coaches. It’s about the entire system being prepared,” Van Fleet said. “Do you have the supplies and the masks? Do you have the kids prepped? This takes a lot of cooperation from all parties. Everyone has to be on the same page.”

“I don’t think there’s anything in the guidelines that seems outlandish to ask us to do,” said Muncy girls soccer and boys basketball coach Jason Gresh. “There’s nothing in there that made me say I don’t want to coach or this would be crazy. It’s all doable, it’s just about how each team is going to handle it.”

Keefer said the timing was just right to allow teams to have the time they need to prepare for fall camp. Even if it takes a few weeks to get a preparation plan to school boards for their approval, even a July 1 start date to begin offseason workouts would allow teams work work in the weight room and get in shape for fall camp.

Van Fleet said Loyalsock may even be able to begin more quickly than that. The school has been preparing a plan for when this day arrived. The plan is going to be vetted by officials at UPMC and the hope is it’ll be able to be presented to the Loyalsock school board at next week’s work session.

“We want to make sure we’re doing this right,” Keefer said. “It’s not like we’re jumping out there (Thursday) just because we’re in a green phase. But I’m hoping it’s sooner rather than later. But if you can give me the July 1 start date, we’ll be good to go.”

“The longer we went without this, the less hope there was to have a season,” Gresh said. “We have to get the kids back into shape because a lot of them have been sitting around since March 13 and maybe haven’t been putting in the time they need to. And if we wait too long, you’re asking for injuries. This will allow us to do the things we need to to prevent those injuries.”