Ride Out Club finding its footing after being shut down 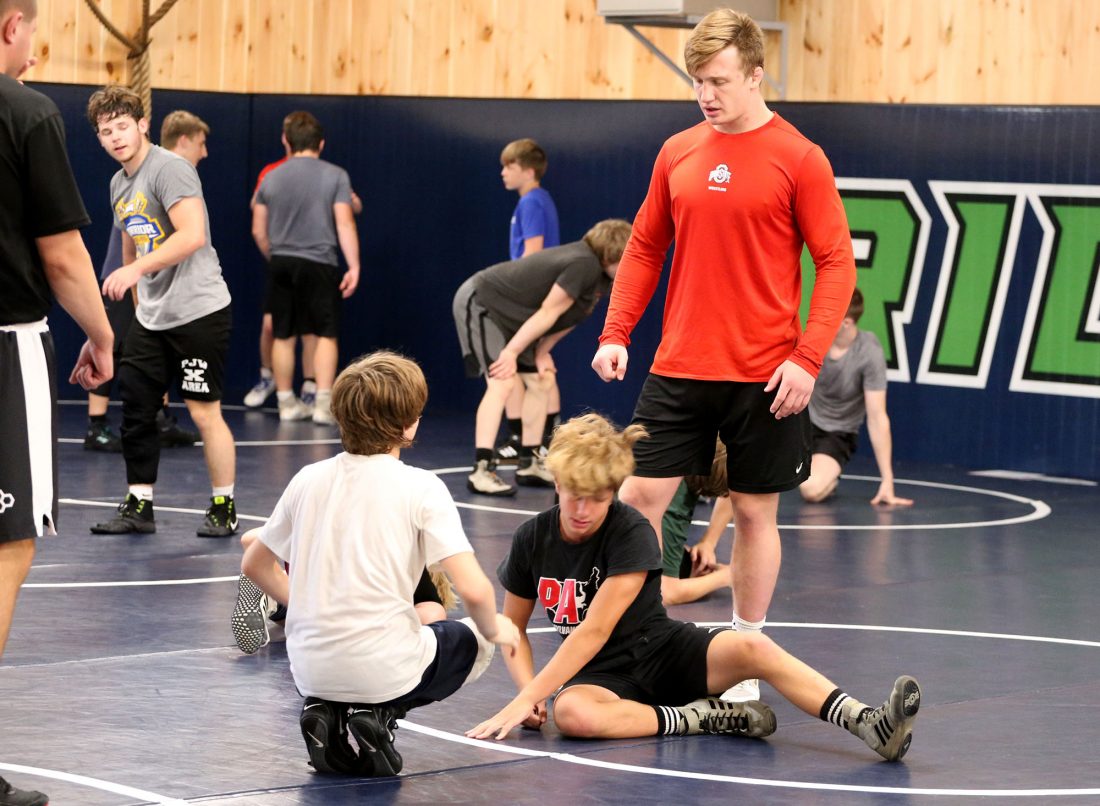 Branden Wentzel has been all over the country to wrestle. The sport he loves almost requires such a schedule to reach the point of success he has as a state champion for Montoursville.

But now he has to travel just a few minutes from his home to get the kind of workout he needs. The Ride Out Wrestling Club in Montoursville is relatively new. Co-owned by Branden’s dad Mike and Lenny Cory, the club is finding its footing after months of being shut down from the COVID-19 pandemic.

This week it welcomed dozens of wrestlers to the facility for a clinic with Ohio State’s Sammy Sasso and Gavin Hoffman Indiana’s Garrett Hoffman. Two weeks ago, former Ohio State All-American Micah Hoffman delivered a camp at the facility. Mike Wentzel said there’s still potential this summer to see more camps of the like offered by Ride Out.

“We’re a new club, but ever sine we moved, it’s picking up,” Branden Wentzel said Wednesday at the club. “But if you would have told me there’d be 60 kids here for this camp, I’d tell you you’re crazy.”

The club first started in Jersey Shore before the Wentzels moved to Montoursville in recent years. The club features wall to wall mats with the Ride Out logo emblazoned on one end with Ride Out written along the length of another wall.

Equipped with a quality sound system to blast music throughout the venue during a workout, there’s room for the most physical of scraps to take place with plenty of room to work without running into others. Wednesday, the Hoffman brothers – Gavin and Garrett — put together one of their famous live sessions in the middle of a period of 90-second scraps during the waning minutes of the clinic and they used a good portion of the mat as each Montoursville grad and Division I wrestler scrambled for position on the other.

The club has been a welcome spot for the likes of the Hoffman brothers, who are both home until they return to school in August. They can lift weights at home, but they come to the club to be able to roll around and get their workouts in before returning to school.

“I know the wrestling culture is really popular here and there’s a lot of kids who want to get better,” Gavin Hoffman said. “These kids that come here couldn’t be in a better spot.”

The club has grown in the time it has been open. And as the coronavirus pandemic has shut down other club options, wrestlers have filtered their way to Ride Out to roll around. Lock Haven recruit Tyler Stoltzfus has made the trek to Ride Out and brought other team members from Lock Haven with him.

As other clubs in District 4 have disappeared in recent years — including Bison Legend and a club in Danville — there has been a need to rooms in which to roll around. The Buffalo Valley Regional Training Center has largely provided that opportunity, and resident athlete Ben Provisor, a two-time Greco-Roman Olympian, lends a notable name to the club.

Ride Out is trying to provide wrestlers with another option for workouts. The money raised by these clinics goes to the operating and rental costs of the facility. It also helps offset some of the costs of traveling to offseason tournaments.

“A lot of people didn’t believe the room was like it is here,” Cory said earlier this month. “I know a lot of people are worried that if they bring their kids and they’re not one of the go-to kids that they won’t get that individual attention. But we don’t split them up. We put everyone together. We want to help the kids who might be lacking to get caught up.”

“People are going to start noticing and are going to start coming from an hour away or two hours away to wrestle at this club,” Hoffman said. “It gives me the chance to work out and I can make relationships with the kids who are here now. Or I could volunteer and do some coaching like we’re doing this week. It’s going to make me a better wrestler and it’s going to make them better because we’re spreading knowledge. Because the main goal is I want the kids who are here to be better than I was in high school. We want them to know they can do great things.”