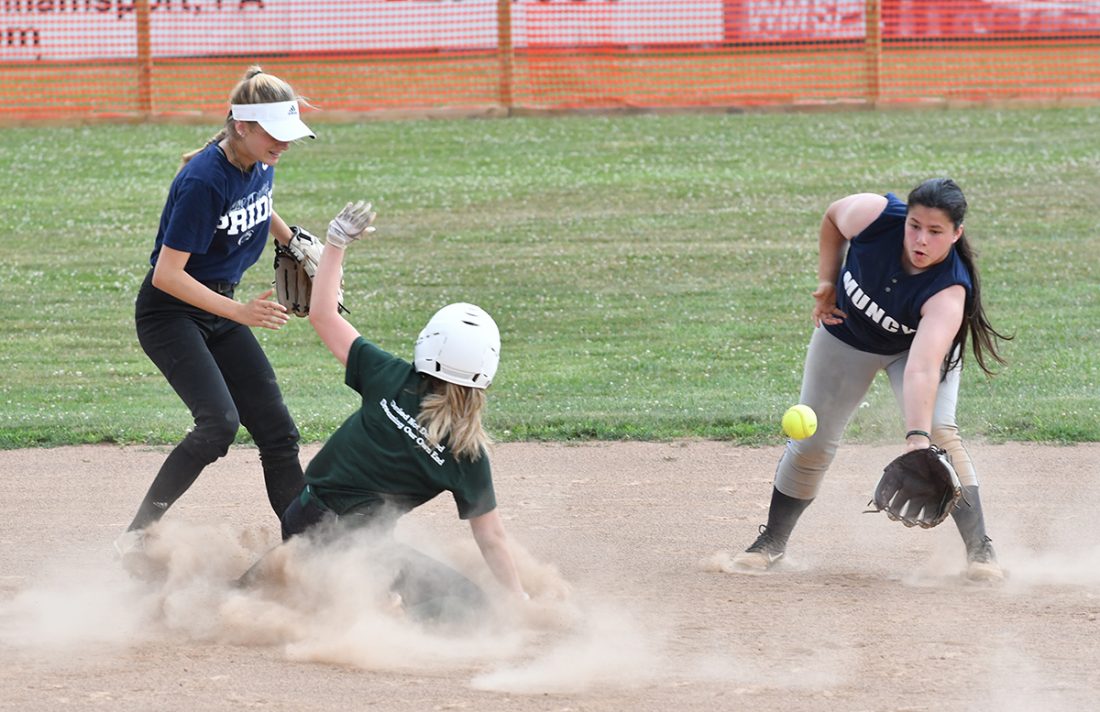 Cathryn Brought reminded spectators what might have been last spring. Muncy’s young nucleus showed what may be coming.

Together, the Wellsboro pitcher and Muncy’s young talent stood out the most as Brought threw a two-hit shutout in Wednesday’s 1-0, six-inning win at Elm Park. Ryann Adams doubled and Kerrah Clymer hit a two-run home run in the top of the seventh as Wellsboro went up, 4-0, but torrential rains came before the bottom of the inning started so the final reverted back to the final completed inning.

Brought, who graduated last month, struck out 13 and was at her best, something crucial on a night when young Muncy pitchers Izzy Gush and Nolah Moyer also were impressive. Those two combined for 14 strikeouts and will be a sophomore and freshman, respectively, this upcoming year.

“Although nothing can replicate losing our season, this is a great opportunity to play as a team. We are all really excited to get to play together, because we thought we wouldn’t have that chance at all,” Brought said. “These games feel very much like high school games, especially playing high school teams that we would have played in season. It feels great to be pitching again and having an element of control in the outcome of the game.”

Brought would have been a four-year starter last spring before the season was canceled due to the COVID-19 Pandemic. She already had developed into one of the area’s premier pitchers and might have been poised for her best pseason yet.

Although that opportunity never came, Brought is making up for lost time and was locked in against Muncy. The future Lycoming basketball player retired the first 11 batters she faced, striking out multiple hitters in an inning five times and walking none. The hard-throwing right-hander struck out five straight before Kaylyn Rice hit a two-out, fourth-inning single and preserved the 1-0 lead in the sixth when she struck out consecutive batters with the tying run at third base.

“I felt really good tonight,” Brought said. “I felt as though I threw a consistent, controlled game.”

Wellsboro backed Brought with error-less defense and Emma Coolidge went 1 for 2 with a walk and to steals. Coolidge scored the game’s first run in the second inning, coming home on Jessa Lohr’s sacrifice fly to center field.

Wellsboro has been a perennial district title contender over the last 20 years and was optimistic about the 2020 season, especially after competing against strong competition at the Disney World Resort in March. Obviously, Wellsboro never envisioned its season being wiped away, but it is using this Elm Park Town League as an opportunity to show others how good it may have been.

“Our team was poised for our best season in my four years of high school this year. Everyone put in tremendous work in the preseason, leading into our spring training trip at Disney where we had a very strong outing from everyone,” Brought said. “We started out a little rusty at the start of this league, but have been coming up to speed each game. Our training trip to Florida was definitely a glimpse into our season as we had outstanding performances from everyone.”

Muncy could be seeing similar performances in the coming years. Muncy was missing some of its projected starters from last spring, but is loaded with young promise and fought hard against an excellent opponent. Muncy has enjoyed an excellent junior high season the last two falls and those players appear ready to now make a mark in high school.

It certainly helps having pitchers like Gush and Moyer to build around. Senior-to-be Rory Oden was not there last night, but will be complemented by those youngsters, giving Muncy potentially one of the district’s deepest pitching staffs. Gush was brilliant in four innings, allowing no earned runs before Moyer struck out six in her three innings.

Gush and Oden are right-handers and Moyer a lefty, giving coach Joe Tedesco the opportunity to play matchups and keep arms fresh next spring. He also has some good young hitters to build around with Rice and Taylor Shannon both delivering hits.

“I’m happy, but not surprised, because I knew what we had,” Tedesco said. “Wellsboro is a tough team and the girls stood with them the whole way. These girls bring confidence.”

Gush and Moyer showed that, throwing especially well against Wellsboro’s veterans. Gush struck out two batters in each of her four innings as did Moyer in her three innings. They moved the ball well, left three runners stranded on third and walked just two.

“The pitching was superb,” Tedesco said. “They both have nice stuff.”