MARK NANCE/Sun-Gazette 40et8’s Christian Stutzman receives a fist bump from his first-base coach after hitting a single in the first inning against Lundy’s at Carl Stotz Field at Original League on Monday.

MARK NANCE/Sun-Gazette Lundy’s Samai Houston watches his third-base coach for instruction during the first inning of their game against 40et8 at Carl Stotz Field at Original League on Monday.

MARK NANCE/Sun-Gazette Lundy’s shortstop Braiden Gleckl throws to third base for an out in the first inning against 40et8 at Carl Stotz Field at Original League on Monday. 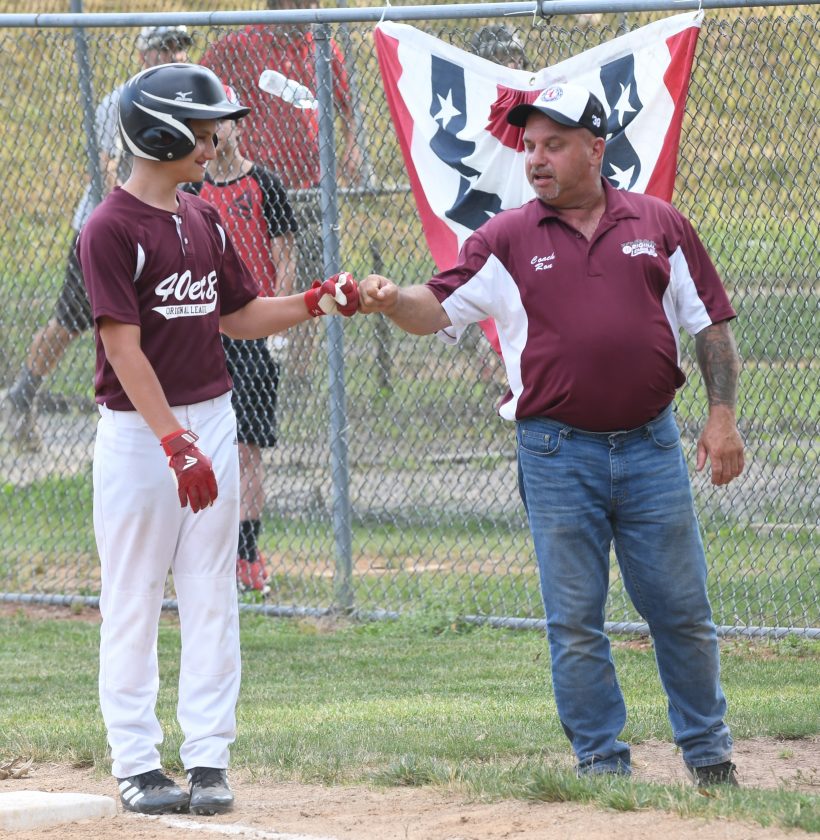 MARK NANCE/Sun-Gazette 40et8’s Christian Stutzman receives a fist bump from his first-base coach after hitting a single in the first inning against Lundy’s at Carl Stotz Field at Original League on Monday.

The umpire stood behind the pitcher’s mound with his clicker in his left hand to track balls and strikes. On this day, where the sun’s heavy-handed heat enveloped those seated around the birthplace of Little League Baseball, his polo shirt and jeans were a nice respite from the protective equipment homeplate umpires normally wear.

As the evening hours came, the temperature only rose, eventually brushing triple digits. But there the umpire stood in the middle of Original League’s Lundy’s and 40et8 teams, making sure everyone hydrated between innings and rarely moving from his spot as adjudicator.

In some instances, Monday’s game felt no different than any other youth baseball game which has ever been played at the field. Gloves and were thrown in disgust. Hats were used more as fans than headwear. Coaches shook their heads in confusion as players still learning the game made mistakes. Pitches were thrown to a forgiving strike zone which kept the game moving.

It was good to see what resembled normal in a world where nothing is anymore. All the little things which make youth sports so fun and often funny are a sight for sore eyes. Three fields full of children having fun with baseball and adults volunteering to lead the way even as an oppressive sun acted as the hammer to the people’s nail.

It was refreshing. Games have been happening in Lycoming County and around the state for a couple weeks now. It’s the first steps to coming out of the COVID-19 pandemic and returning to life as we used to know it. 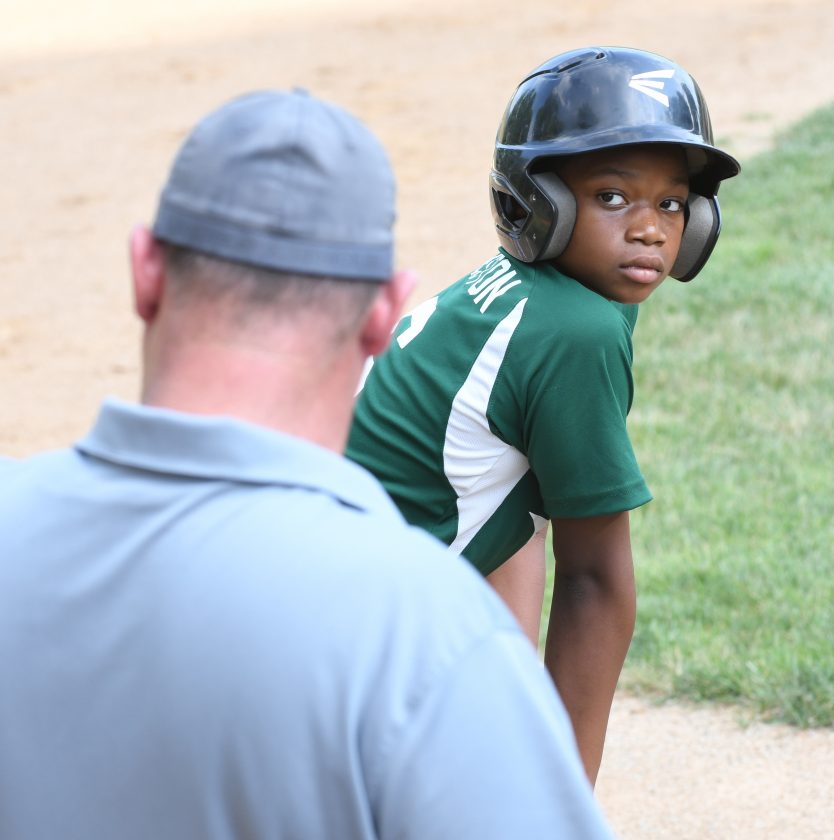 MARK NANCE/Sun-Gazette Lundy’s Samai Houston watches his third-base coach for instruction during the first inning of their game against 40et8 at Carl Stotz Field at Original League on Monday.

There are a few changes, including the home plate umpire standing behind the pitcher’s mound instead of crouched behind the catcher. Instead of congregating in the dugout, kids spaced themselves out sitting on ledges or bleachers outside of the dugout as their team hit.

But everything else felt normal. Fans took advantage of every inch of shade offered by the trees surround. The ringing ping of a metal bat hitting a baseball elicited cheers from both sides of the field. There was a rhythmic ping coming from the batting cage next to the field where a father pitched to his son.

For a few hours Monday, it was just baseball. It was a relief. Just playing baseball and softball on the youth fields of the area is a win. It’s exactly what Little League President and CEO Steve Keener wanted to see this summer when it became apparent there could be no Little League World Series.

From the moment the COVID-19 pandemic changed how we all live our lives, Keener made it known it was more important for local leagues to be able to give their players a season than it was to have a Little League World Series. And that’s exactly what leagues are doing, even ones like Original League, which are not Little League affiliated.

After months of being couped up in the house, getting kids outside to run around, spend time with their friends, and maybe even learn a little baseball is exactly what we all need. But it all still needs to be done safely. Even though masks were a rare commodity among fans, players and coaches during Monday’s games, folks generally stayed spread out as much as they could. Baseballs were switched out when possible just to be safe. 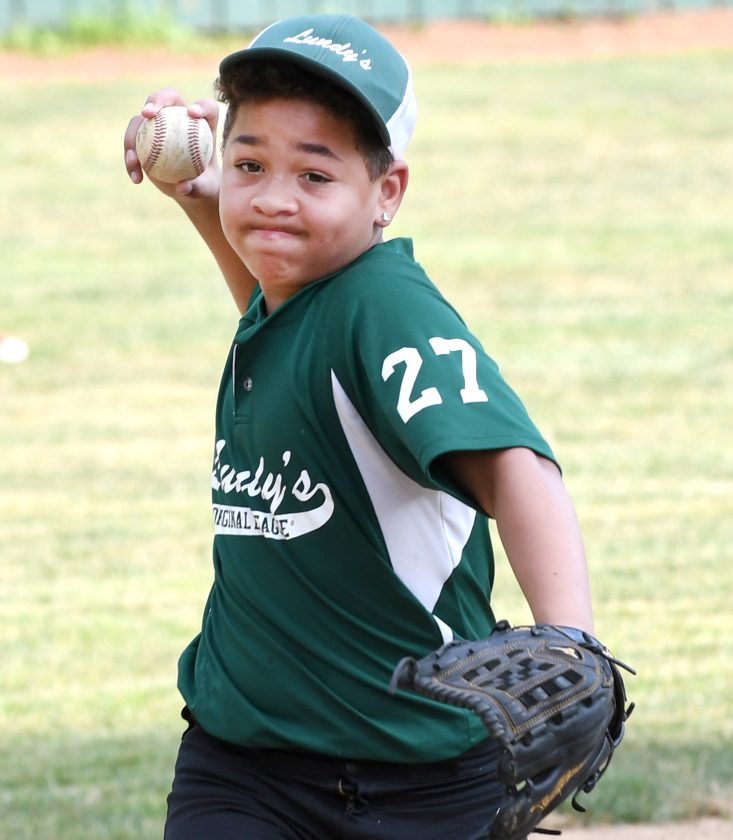 MARK NANCE/Sun-Gazette Lundy’s shortstop Braiden Gleckl throws to third base for an out in the first inning against 40et8 at Carl Stotz Field at Original League on Monday.

Baseball is such an important fabric of our communities, as are youth basketball leagues and soccer leagues, and whatever other sport you can name. As we continue to long for entertainment and ways to fill our time which doesn’t involve the word binging, youth baseball and softball leagues give us an alternative.

The game here, for the most part, is still pure. It’s still about fun. It’s still about learning. The kids don’t know it, but they’re making memories they’ll carry with them forever, even in the midst of a seemingly meaningless early July game in the sweltering heat of the summer.

And if we can give the children that, then it’s the right thing to do. Even if it does look a little different than it used to.