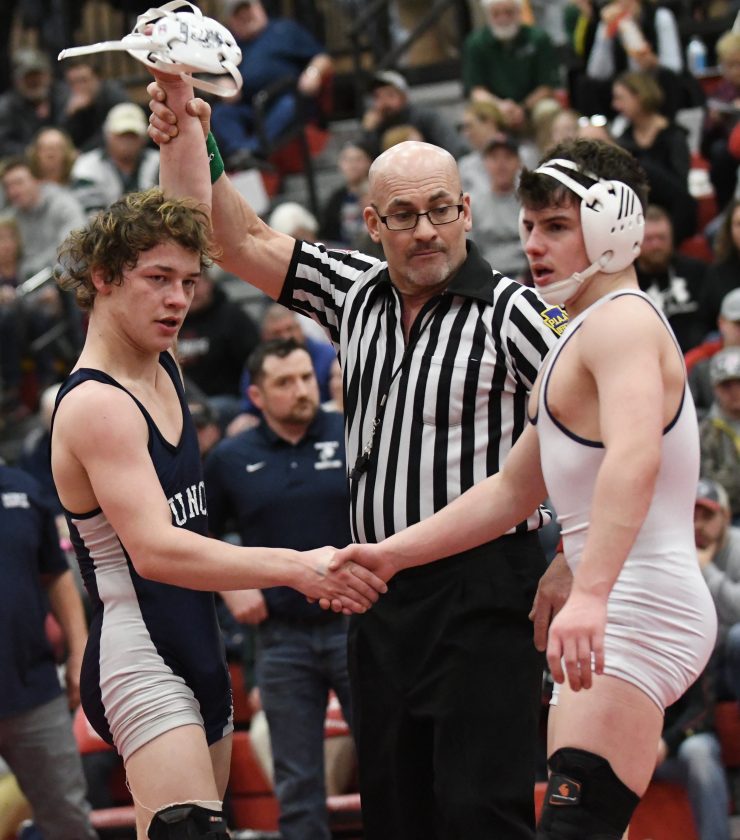 SUN-GAZETTE FILE PHOTO Muncy’s Jacob Blair, left, has his hand raised in victory after winning a match last season. Blair will be furthering his career by competing at Bloomsburg University.

There were weeks after Jacob Blair returned from the state tournament in March he didn’t want to think about wrestling. And he didn’t.

He had put a lot into his final season of the sport at Muncy. After missing his entire junior season with a knee injury, he knew he needed a big senior season if he wanted to reach his goal of being able to wrestle at a Division I school in college.

Blair posted 37 wins, but he needed 38. He came one win short of winning his second career state medal in Hershey, and he needed a break. But Blair’s body of work over his career was pretty convincing. He won 114 matches in just three seasons. He was one of the most consistently important pieces in the Indians’ lineup his entire career.

All that earned him the opportunity to wrestle at the Division I level. Blair was part of the 15-person recruiting class announced by Bloomsburg University on Tuesday.

“Coach (Marcus) Gordon and coach (Russ) Hughes are two of the toughest coaches I know,” Blair said. “I love tough coaches. I felt like if I went there they would make me the best wrestler I can be.”

Blair’s career at Muncy was a whirlwind. He finished eight in the state as a freshman 106-pounder. He was ranked as high as No. 1 in the state at 106 pounds as a sophomore and was a hammer who helped Muncy finish fourth at the PIAA Team Wrestling Championships before failing to make weight at the regional tournament. He suffered a knee injury just before the start of his junior season which eventually cost him the whole year. And as a senior he lost just twice during the regular season before eventually reaching the blood round at states where he lost on a locked hands call.

But his talent was on display whenever he put his toe on the line. And Blair feels like he’s only scratched the surface of what he’s capable of.

Blair joins a Bloomsburg University program which is trying to come out of a six-year slump the likes of which it hasn’t seen very much in its storied history. In the three years before Gordon was named the coach, the Huskies went a combined 5-47 in dual meets, including 0-18 in the Eastern Wrestling League. In Gordon’s three years as coach, the Huskies are 12-22, but have qualified three wrestlers for the national tournament in the last two seasons.

Blair wants to be part of a recruiting class which hopefully helps bring the Huskies’ program back to prominence. He’ll be joined by two-time state runner-up Cole Rhone of Benton, who is transferring into Bloomsburg from Virginia Tech. The class also includes Class AAA state runner-up Andrew Balukas of Easton, nationally-ranked Antoine Allen of Ohio and Edinboro transfer Shane Noonan, among others.

“My goal is to help the program take the next step,” Blair said. “I’m going to do everything I can to help push that team aspect.”

Blair finished his career at Muncy with a 114-15 career record. He’s planning on majoring in criminal justice with the hopes of one day becoming a state trooper.

But more than anything, he just wants the opportunity to get back in the room and practice again. Those weeks following the disappointment of the state tournament were something he needed to get himself right again. He still loves to wrestle and still wants to wrestle. And he’s got high expectations and believes there’s still some untapped potential within himself.

“I greatly think I can be at nationals in the next couple years,” Blair said. “The goals after that is to place at nationals. I really think I can do that. I feel like under coach Gordon and coach Hughes they can bring out the next level of wrestling in me and help me improve more on the things I need to work on.”

Decade’s best No. 5: Ali Hillson was a winner at North Penn-Mansfield in girls basketball

When Jenna Waring was in the circle for Montgomery, Loyalsock's offense couldn't seem to get the spark it wanted. ...