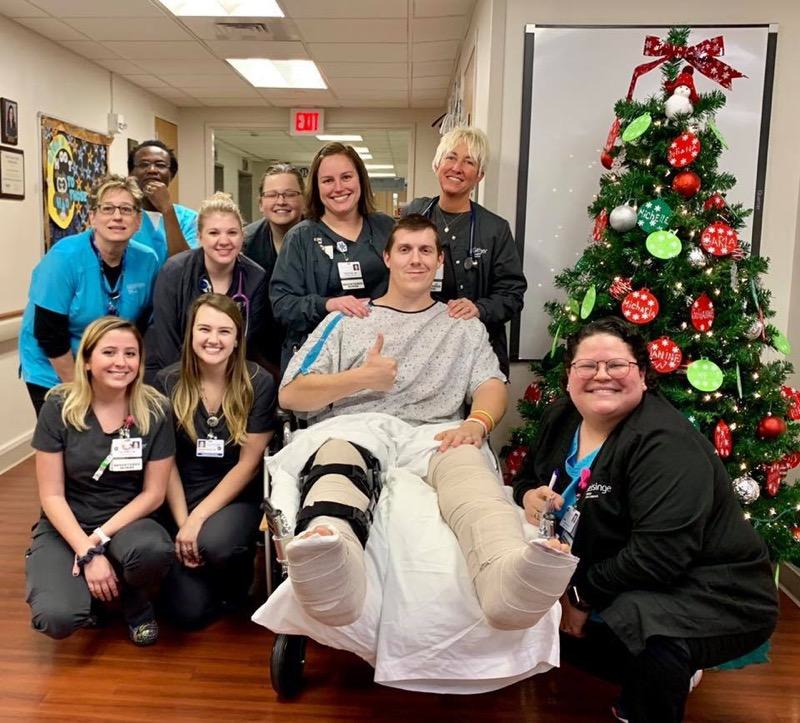 PHOTO PROVIDED/ Sun-Gazette McCabe left Geisinger Medical Center in Daville on Nov. 29, 2018, after nearly a month of surgeries and rehabilitation.

A car crash not only shattered a local football coach’s body, but also his expectation of community support in his time of need.

Keith McCabe graduated in 2011 from Williamsport Area High School and returned there in 2014 to coach the football team’s offensive line. The head coach and players said he has been fully invested in not only the team, but the community and his enthusiasm encouraged many players to be the best they could.

Driving back along Route 220 North from Lock Haven University — where McCabe was taking classes to become a teacher — for a football meeting at WAHS, he said it was a particularly rainy day as he passed Henry’s Barbecue.

“Just driving as if life is normal. Things were moving the same as they always do,” said McCabe.

Within seconds of attempting to pass another car, he said, his vehicle started to shift left, out of control. McCabe’s car slid through the median and into oncoming traffic.

“You’re trying everything you can in that moment. I mean, just panicking, especially when you’re on the highway,” said McCabe. “By the time I look up the from the dashboard, a tractor-trailer is staring me in the face coming in at 64 or 65-miles-an-hour. And that’s the last thing I remember.”

Coming in and out of consciousness, McCabe said he recalled hearing drilling and sawing, as well as people encouraging him to “stay with us,” and “we’re getting you out of here.”

Emergency response teams later said to McCabe he was unresponsive on the scene and it took 15 minutes to get him out of the vehicle.

A Lifeflight helicopter was denied due to weather.

There wasn’t any pain, he said, recalling being loaded into an ambulance.

“I just said to the paramedic, ‘someone needs to call my wife,'” said McCabe. “(My Wife) picked up the phone and she said when the paramedics were talking to her, she could hear me in the background saying her phone number.”

Emergency services transported McCabe to UMPC Susquehanna in Williamsport to be stabilized from multiple traumatic injuries, including open compound fractures on both ankles,a fractured pelvis, a dislocated ball and hip joint and a kneecap, which had been split in two.

He was there for only 45 minutes before being transported again to Geisinger Medical Center in Danville, where he was immediately taken in for an 11-hour surgery.

“I ended up having four more surgeries after that. So I had a total of five surgeries while at the hospital was in the ICU for two-and-a-half weeks,” from Nov. 5 through Nov. 15, 2018, said McCabe.

When he first woke up from surgery, McCabe said he was strapped to his bed and scared. He had lifted nurses in his unconscious flailing after the surgery.

“But more than anything, I was just happy to be alive. To see my wife to see my mom and dad sitting there. My brother, my sister, my wife’s parents,” he said. “You just you put away any conversations you had prior to the actual event that may have been an argument or something that you don’t care about.”

After nearly a month in the hospital, he was moved to AristaCare at Loyalsock for two weeks.

Choosing to view the bright side of his condition, McCabe said he talked to many people he hadn’t seen in years and learned how to be patient.

But financial burdens were starting to weigh in: He had just bought a new house, stepped aside from his full-time job at Weis Markets to study at LHU, toss in bills for new medical equipment to purchase for his eventual at-home treatment, hospital bills and now, he was completely reliant on his wife for daily needs.

“You never think you’re going to get help. I mean, you just assume ‘this is my doing, we have to take the brunt of all this,'” he said.

But help soon came in: two GoFundMe pages were started for him and he was contacted by the Lenny Strout Memorial group, who sent money from their annual Christmas Bingo.

“We ended up finding out that this year was the most successful Bingo that they’ve ever had with people from Williamsport going up there,” said McCabe.

At LHU too, Professor Swartz and her daughter, Melissa Mabus, raised money to purchase McCabe a new laptop, as his old one had been destroyed in the accident.

“We got received hundreds, hundreds of cards just from all over friends, family, people, the community, universities, churches, people we don’t even know were helping” with gift cards, meals and donations, said McCabe.

Weis Markets, who McCabe said has been like a second family, held fundraisers, selling hot chocolate and gift baskets.

Josh Rogers, of Rogers Uniforms, launched a T-shirt fundraiser, printing a modification of the phrase McCabe’s used at football: “One line, One heartbeat” — a reference to the offensive line.

“I never really understood it until I started playing varsity football and experienced the things I did,” said Tucker Kreisher, a senior at WAHS and offensive lineman under McCabe.

“He really made me realize it’s not an individual guy working up there by themselves, like without the guy next to you. Sometimes the whole thing does run like it is ‘one line, one heartbeat,’ because if you take one man out of there, the whole thing crumbles.”

Rogers printed shirts that read, “one family, one heartbeat.” Schools around the community organized red-out days, where they sported the shirts to support McCabe.

“It’s amazing to me that we took a simple football, motivation that we have for our football team and turned it into a community-wide support system,” said McCabe.

Rogers Uniforms was able to give over $2,000 to McCabe from the T-shirt sales.

“What specifically made me want to do it what was the idea of community,” said Rogers, who also coaches 9th grade football at WAHS. “It was like having a brother there on the bed.”

Chuck Crews, head coach of the WAHS football team, said he takes it as evidence that he’s building something larger.

“It’s more than just about football. This has nothing to do with the game yet we were more together while we were supporting and still continue to support Keith than when preparing for football,” said Crews, who visited McCabe with the coaching staff days after the accident.

“We truly look out for each other, regardless of what the issue is,” he said.

Currently, McCabe said he is healing faster than the doctors expected and he credits community support for much of it, as he thanks friends family, school district, university and churches.

“My goal is to be ready for this upcoming season. I don’t want my linemen slacking, they need to know I’m getting ready and they better be getting ready too.”

Looking on everything that has been done for him, McCabe said, “I just smile that like, wow, this really is a great community.”