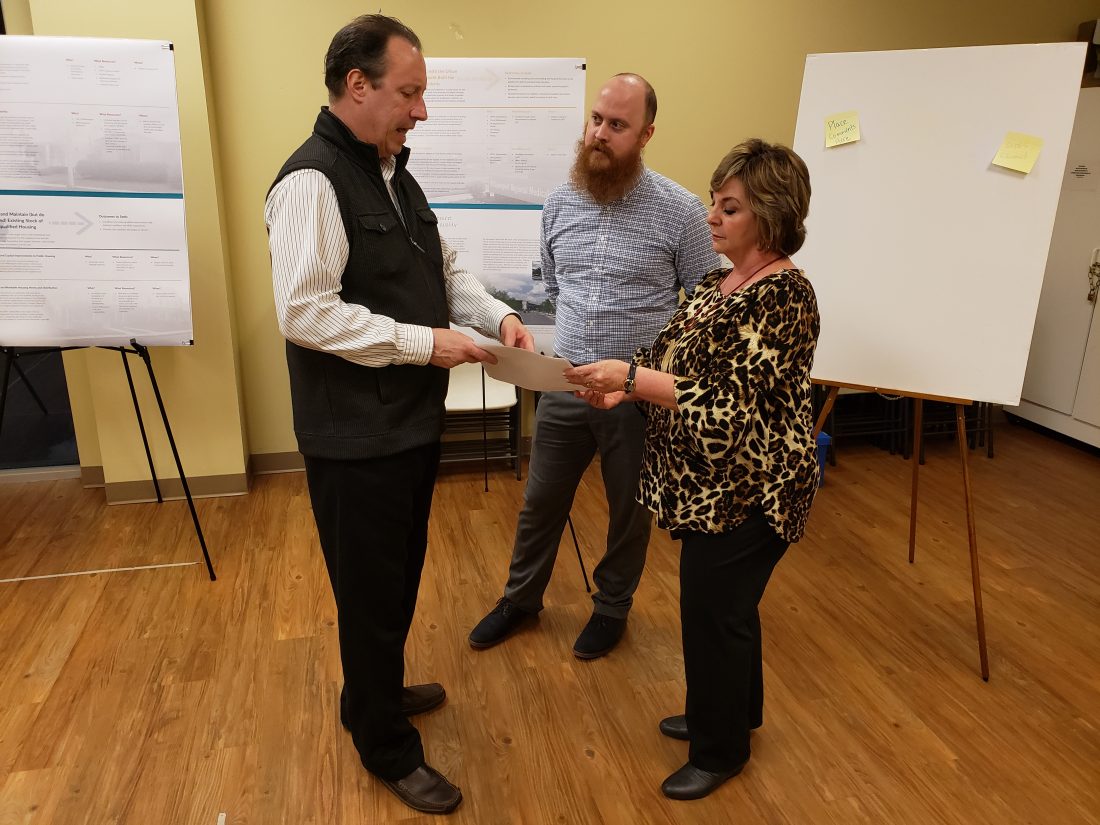 A potpourri of ideas were shared at the YMCA Wednesday night on how to improve city blocks encompassed in the Park Avenue Plan.

For the 40 or so visitors attending the open house, which the city and Ingalls Planning & Design held, the event offered current information as a draft of the plan is prepared for City Council to review in a few weeks.

For the past two years, Matt Ingalls and his team of urban design consultants have been gathering ideas from stakeholders, especially the residents who live in the project area.

It can expand to involve areas further east to Market Street and be linked to pristine locations, such as Brandon Park, further connecting city blocks in it to the downtown, he said.

The purpose of the plan is to provide council with ideas that may help this part of the city, frequented by crime and blighted buildings – many of which are lower-income rentals – into a healthier, more vibrant and valuable part of the city.

One by one, Ingalls and staff, and Stephanie Young, director of the city community development department, greeted visitors.

Ideas were shared and even written onto sticky notes that will be read and put into the plan.

Investors who have skin in the game, such as Joseph Prato, a city landlord with properties bounded by Cherry Street, Park Avenue and Center Street, were just what the consulting wanted to see, Ingalls said.

Prato said he has about five properties for sale, which could become anything from a fast-food restaurant, such as McDonalds, to apartments.

“I want to see a Nature Play for children who live here,” said Christine Johnson. “Not just more buildings or plastic.”

For Johnson, more open green space, and a natural environmental area for elementary-aged children could foster their interest in biology and become a gathering spot for many generations to come.

Brandon Park also may see a similar design for a natural environmental and educational space, with outcrop of rocks, plants and a stream that will serve to benefit not only as a channel of stormwater discharge, but also a place for children to learn about animals and insects.

The plan also offers opportunity to utilize lots for commercial and retail purposes.

“Has anyone approached the stores at the Lycoming Mall?” asked Tiasha Machuga.

Mayor Gabriel J. Campana, who attended, said he knows of a Loyalsock Township business owner with interest to restore a restaurant at a site where one closed at Park Avenue and Walnut Street.

Some of the individuals contributing chose not to give their names because they demand more codes enforcement and a police presence.

“Strong codes enforcement and courts that support fines for codes enforcement,” stated one of the sticky notes. “More funds allotted for demolition and for tear downs,” another note stated.

Housing is a major component of the plan.

Preserve and maintain, but not expand, existing stock of income-qualified housing, Ingalls said.

Protect and expand clusters of well-maintained housing, while finding areas for improved housing, the plan states.

Consultants don’t want to necessarily price out individuals who want to remain, but do want to keep those who want to live in restored houses and to retain the residents who call this section of the city home.

Some say they were upset about the hospital scooping up more land for its expansion and parking lot needs.

But the plan stated that rather than have the hospital system purchase the properties, the concept is to integrate UPMC with an urban landscape design to benefit both the hospital and residents.

Once the investors start to see the area take off, and the coalition of partners continue to build on ideas, the area will see improvement, Ingalls said.

The draft shows wants to improve connectivity to the downtown with improved sidewalks and streetscape that will eventually provide the section with its own identity.

So far, about $85,000 has been contributed to get the plan off the ground, Young said.

“Those funds were put into place in 2017,” Young said, enthused by the turnout on the sloppy night with freezing rain.

Young said she was thrilled with the amount of ideas and input generated at the open house.

“I’m glad we didn’t have to cancel,” Young said. “We got a lot of good feedback on the draft plan,” she said.

The next step is to revise the information, summarize it and get it to council for formal adoption, she said.