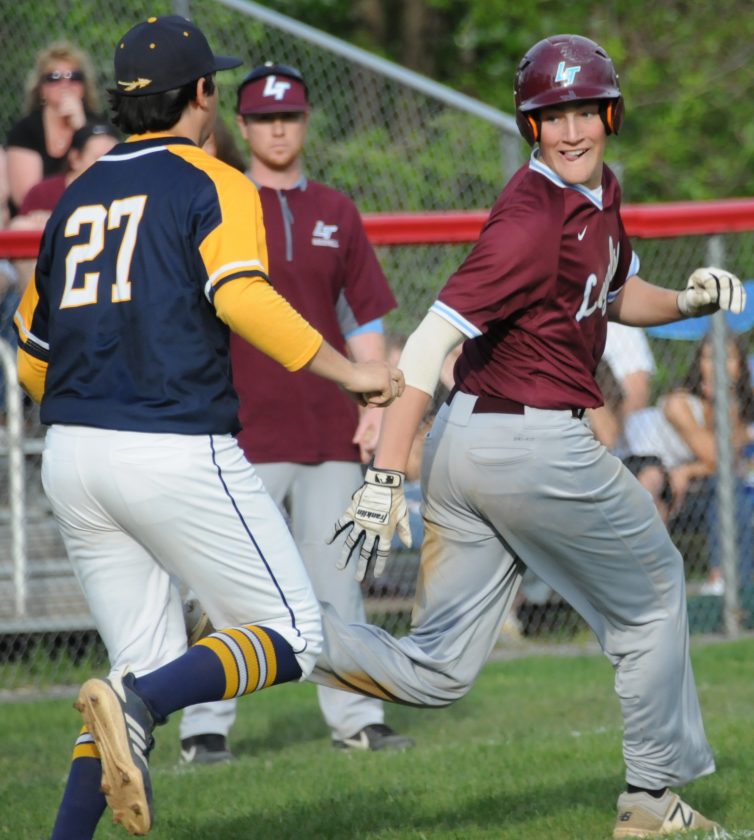 MARK NANCE/Sun-Gazette Loyalsock’s Dane Armson gets caught in a rundown against Montoursville’s Hunter Shearer during Friday’s Backyard Brawl games at Logue Field. Armson got tagged out on the play.

The following is a look back at what transpired during the 2019 Backyard Brawl an annual event featuring four teams that have made 106 straight combined playoff appearances.

Play of the Game–Rees Watkins’ eighth-inning RBI double: While Dane Armson put Loyalsock ahead with an RBI double one batter earlier, it was the Watkins RBI double to the left-field fence that proved just as crucial, giving Loyalsock a 5-3 lead. That double loomed large in the bottom of the inning when Gabe Phillips hit a two-out RBI double and pulled Montoursville within 5-4. Watkins finished with the game-winning RBI as Loyalsock rallied from a 3-1 sixth-inning deficit and avenged two previous losses against its rival.

Player of the Game–Dane Armson: The left fielder delivered big hits throughout the game, finishing 3 for 4 with two RBIs. Armson hit an RBI single in the sixth inning that made it a one-run game before smashing his go-ahead RBI double two innings later. Armson edges out Matt Worth who was brilliant in four innings of relief.

Key Moment–Bases loaded escape: Montoursville looked like it had a big third inning brewing when it loaded the bases with no outs. Instead, Anthony Pastore struck out the next two batters before inducing a lineout and preserving a one-run lead. Pastore stranded 10 runners in the first four innings and without this escape Loyalsock’s late-game rally might not have mattered.

Play of the Game–The Throw: Luke Winner created quite a Backyard Brawl memory when he made a perfect throw home from center field and threw out Xavier Taylor trying to score, completing a game-ending double play. Winner’s throw hit catcher Dom Harding chest high and he made a quick tag as South defeated Williamsport for the first time since 2003.

Player of the Game–Tripp Breen: The St. Bonaventure-bound pitcher was at his best, overpowering Williamsport and throwing six shutout innings. Breen struck out 13, allowed only three hits and left runners on second and third with no outs in the second inning. Breen won his seventh straight start and helped snap Williamsport’s seven-game winning streak.

Key Moment–Logan Burkett’s timely hit: It was apparent early that with Breen and Williamsport ace Jon Zayas dealing, one run might win this game. Burkett delivered it in the third inning when he ripped an RBI single into left field after Harding had walked and pinch-runner Tyler Trojan had reached third on an error.

Play of the Game–Connor Watkins smooth first-inning play: Loyalsock led just 1-0 after four innings and if Watkins had not handled a tricky Cole Brewer bouncer in the first inning, the game’s complexion might have changed. South loaded the bases with two outs and looked like it might take the lead when Brewer bounced a grounder into the grass. Watkins handled the ball off the second hope and made a snap throw across his body, beating Brewer by a few steps and keeping the game scoreless instead of South taking an early lead.

Player of the Game–Dane Armson: He did it with his bat in the semifinals and Armson showed off his arm in the championship. The junior right-hander pitched his best game, throwing six innings of shutout baseball, striking out six and scattering four hits. Oh yeah, he also went 2 for 4 with a double and two RBIs.

Key Moment–Loyalsock’s seventh-inning eruption: Logan Burkett threw five strong innings for South and the Mounties still had a fighting chance after six innings, trailing 3-0. But Loyalsock changed all that, scoring seven times and delivering five hits in the top of the seventh while building a 10-0 lead. Armson and Joeb Schurer hit two-run singles and Alex Schluter an RBI single.

Play of the Game–Jonathan Zayas’s web gem: Williamsport already was in command, leading 7-0 in the sixth inning, but Zayas made maybe the tournament’s best play, reminding Montoursville how hard coming back would be. Logan Ott scorched a rocket down the first-base line and it appeared it might go for an RBI double. Instead, Zayas dove to his left, made a fantastic catch, then tagged the first-base bag, completing a double play.

Player of the Game–Kyle Caringi, Williamsport: A day after his future St. Bonaventure teammate Breen stole the show in the semifinals, Caringi was equally dominant. The left-hander overpowered Montoursville, throwing 6 2/3 masterful innings of two-hit baseball and striking out eight. Caringi did not allow a hit after the third inning and retired 14 of the last 15 batters he faced.

Key Moment–Caringi’s third-inning escape: Jaxon Dalena belted a leadoff third-inning double and it looked like Montoursville might tie it, 1-1. Instead, Caringi retired the next three batters, starting a stretch in which he struck out four straight. Montoursville put only one runner on base the rest of the game.

EXTRA BASES: St. John Neumann made history last week, winning three games and reaching the District 4 Class A playoffs for a second straight season for the first time in program history. The Knights (11-5) are having their best regular season ever and are a win from tying the program record for victories. The Knights swept a doubleheader from Bucktail before rallying from a three-run, fifth-inning deficit and beating Muncy, 5-3. Catcher Naaman Amos hit a go-ahead two-run single and had four RBIs in the three wins. … A year ago, Lewisburg captured the District 4 Class AAAA championship following a 5-8 start. The Green Dragons are hoping to make a similar run after opening the year 3-8. Pittston snapped Lewisburg’s five-game winning streak Saturday, but the Green Dragons (8-9) won four games in five days against four playoff teams to boost its playoff chances. Lewisburg rallied from three down in the seventh to beat Loyalsock and won extra-inning games against Central Columbia and Hughesville while also blanking Shamokin 2-0 two days after the Indians defeated HAC-I champion Selinsgrove. … Gage Yohn, Brayden Strouse, Kalen Guyer, Kevin Wetlauffer and Rhyle Strausbaugh all had two hits as Montgomery celebrated Senior Day with an 11-1 win against Sugar Valley. … Grady Oden struck out eight and had two hits as Muncy defeated Bucktail, 11-4. Coty Steele added three hits two days after taking a no-hitter into the fifth inning against Neumann. … Canton clinched a Class A playoff berth, scoring 22 runs in wins against Northeast Bradford and Sayre. The Warriors (10-8) have won nine of their last 13 games since starting 1-4.

1. Williamsport (12-4): This will probably upset the South fans, but ranking the Backyard Brawl teams is no easy task. Yes, Williamsport lost in the semifinals, but it has won eight of its last nine games and made a nice statement with its win against Montoursville. The Millionaires also defeated State College, 4-3, delivering their second walkoff win this season. Jon Zayas threw 6 2/3 brilliant innings against South, allowing no earned runs. He and Carigni are quite a tandem and allowed just seven hits in 13 2/3 innings.

“They are two very strong left-handed pitchers we have and they both work extremely hard,” Williamsport coach Kyle Schneider said. “They both want it. Every time they’re out there they want that win. There’s not much more you can ask for from two pitchers.”

2. Montoursville (13-3): The Warriors certainly have to play better than they did at the Brawl but looked outstanding when they shelled the state’s No. 1-ranked Class AAAA team North Schuylkill, 11-4, last Thursday. Montoursville scored nine runs off Connecticut-bound Reggie Crawford and finished with 12 hits. If that Montoursville team shows up for the rest of the season, the Warriors remain a strong title contender. Jaxon Dalena threw four shutout innings and also went 2 for 2 with a triple and three RBIs while his brother Maddix was 2 for 2. Cameron Wood added two hits and a double.

3. Loyalsock (10-8): It was not easy, but the Lancers are playoff-bound for an 18th straight season. Loyalsock could be a team a higher-seeded squad wants to avoid as they start peaking at the right time. The Lancers have won three straight games and Armson, Worth, Pastore and Chase Cavanaugh all threw well last week.

“It’s a weird game sometimes and the kids have to understand that there are ups and downs in this game,” Loyalsock coach Zac Martin said following the Montoursville win. “(Friday) we didn’t get too down on ourselves. We made a couple mental mistakes but we rallied around each other. That’s the kind of stuff that should have been happening all year, but if it’s going to start happening now I’m OK.”

4. South Williamsport (13-4): The Mounties split four games last week and are hoping to play better defense moving forward after making multiple errors each time. Breen earned the win in both wins, striking out 23 and he has not allowed more than two earned runs in a start all season. He also hit a grand slam in an 11-4 win at Southern Columbia and had five RBIs, while Winner went 4 for 4 with three runs and an RBI.

5. Central Mountain (10-6): Aaron Swartz has provided quality starts in all but one of his starts and was strong again in Wednesday’s 3-2 win at Danville. The senior right-hander is 3-1 with a 2.47 ERA and is averaging more than a strikeout per inning. Peyton Johnson is helping provide him run support and went 2 for 4 with two RBIs in a Thursday loss against Shamokin.

PLAYERS OF THE WEEK

Heath showed why he is a West Virginia recruit, hitting .400 in five games while crushing a long home run against Hughesville and adding four RBIs. Heath hit safely in each game and also pitched outstanding against Hughesville, allowing no earned runs, two hits and striking out six in four innings. Armson’s Brawl performance was an extension of his big week. The versatile junior hit .500 in four games, delivering eight hits and four doubles. Armson hit a double in all four games.

GAME OF THE WEEK

Wednesday’s game at Brandon Park could be a potential playoff preview with the Griffins a victory from joining Neumann in the Class A playoffs. The Mid-Penn rivals played an entertaining game the first time around with Neumann winning, 6-3. The Knights are fighting for the No. 2 seed in districts and a win here would help toward reaching that goal.