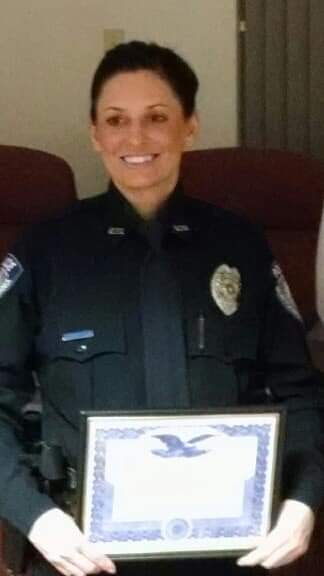 MONTGOMERY — The late Angel McLaughlin had the right first name, according to her friends and colleagues.

The five-year veteran of the Montgomery Police Department lost her fight with cancer June 1, and soon afterwards, sentiment came pouring out from various communities where she served as a patrolwoman and emergency medical technician.

She was a dedicated civil servant with a unique ability to, despite wearing a badge and carrying a gun, put those who she interacted with at ease.

“I only met her a few times but I immediately appreciated her protecting our borough, Montgomery,” said Laurie Heintzelman.

Caring, concerned and a positive role model, McLaughlin pulled Heintzelman’s 17-year-old daughter over while the girl was driving her mother’s vehicle.

The registration had expired.

McLaughlin calmly went through the check and the younger Heintzelman told the officer that her mom just forgot to renew the registration.

Instead of issuing a ticket, McLaughlin told the girl about the need to “keep up to date,” which amounted to only a warning.

“She also gave her a coupon for a free coffee,” Heintzelman said.

“I thought ‘what an awesome way to show a teenager compassion while teaching them a lesson.'”

The interaction between officer of the law and teenager left the girl with a lot of admiration for the patrolwoman.

“She was an asset to our community,” Leet said. “She was dedicated to the safety and well-being of our borough.”

Leet said McLaughlin was one to show up at the borough block parties, in uniform, yet never did she make anyone uncomfortable.

“Quite frankly,” Leet said, “the opposite happened. She was great with children.”

McLaughlin never worked under Leet who has authority over the borough police, however after taking office, Leet said he was informed of her dedication to the force, giving as much time to the borough as she physically could.

“Traits like that aren’t found in people often,” Leet said of McLaughlin’s dedication, loyalty and perseverance for the safety of others — even when she was ill.

For Leet and many others, to know McLaughlin was an honor.

“Prayers of peace and comfort for Angel’s family, and many thanks for her service,” Leet said.

Her colleagues at the police department shared their sentiments about a co-worker who made an imprint:

“May we all have the positivity and love of life, family and friends that Angel had in her heart.”