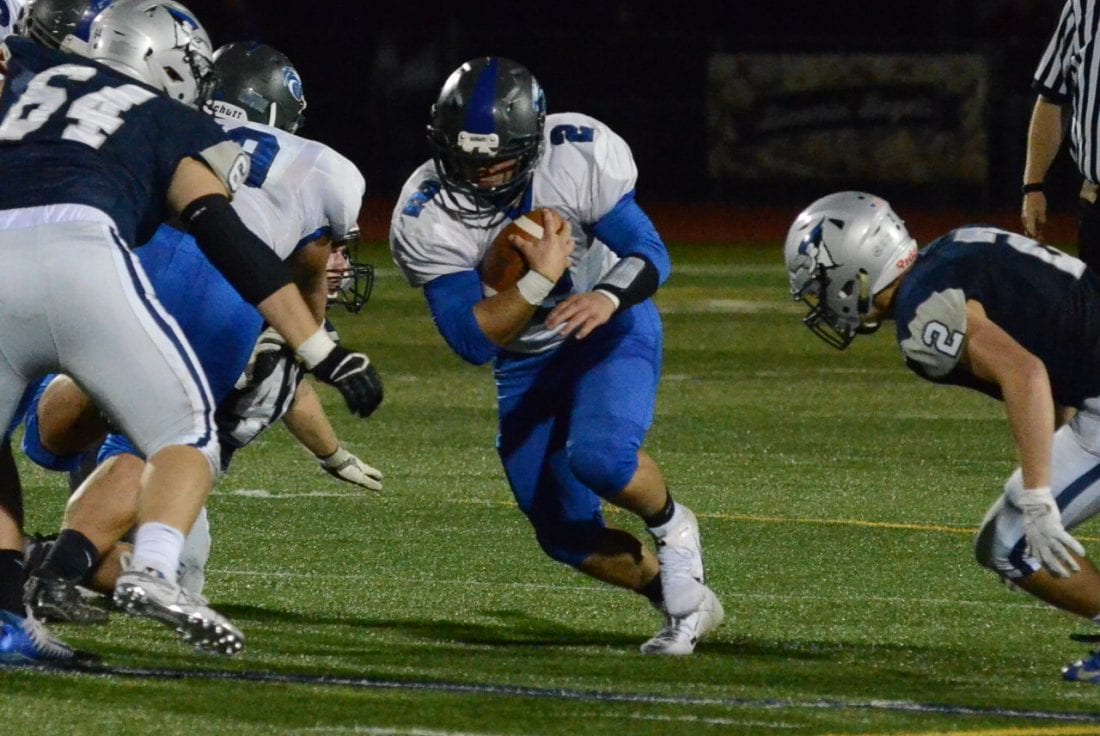 BRETT R. CROSSLEY/Sun-Gazette Correspondent Warrior Run’s Denver Beachel breaks off a run for a big gain during a game at Central Columbia on Friday. The Defenders won, 14-10.

ALMEDIA — Warrior Run continued to prove itself against tough competition as it played a solid game against Central Columbia on Friday night.

Riley Daubert caught a 28-yard touchdown and continued to standout. He jumped a route in the second half and returned it 50 yards for the game’s decisive points as Warrior Run defeated Central Columbia, 14-10.

The win moved it two games above .500 with a game against Loyalsock at home next week. Central Columbia will be forced to rebound against Lewisburg, which fell to Jersey Shore on Friday night.

“That’s on them mentally,” Central Columbia coach Scott Dennis said. “We talk about it all the time. You have to overcome adversity. Not just on the field Friday night, but after a big loss like this we’re in a situation where they have to at midnight put it behind them.”

Central Columbia made mistakes in the game, but no single play embodied the overall theme as an interception by Zander Bradley at the start of the fourth quarter. The play stopped a drive by Warrior Run and appeared to give Central Columbia the ball until Bradley was stripped. Warrior Run recovered the fumble to retain possession for the Defenders. It also gave them a first down.

“There is no quit in the team,” Daubert, who finished with 47 yards rushing and 45 receiving yards, said. “Everyone was giving their all, especially in a close game like this. That’s honestly what it is.”

Daubert had a handful of big plays, but nothing was bigger than his third quarter interception. He read Garrett McNelis as he attempted to connect with his receiver in the flat. The throw was late and Daubert jumped the route to get the ball. The rest was a track meet as he beat out the Central Columbia offense for a Warrior Run lead.

“I saw him come out soft and the he went hard for two steps,” Daubert said. “The quarterback was late and I just happened to jump it. I was just outrunning everybody after that. We capitalized on that right away. We needed a big play right there.”

Central Columbia received an early break when is pushed Warrior Run deep into its own territory after a long punt. The Blue Jays stopped the Defenders on three straight plays despite an offsides called on the defense. Warrior Run then punted out of its endzone, but the attempt hit he goalpost and was picked up for a safety after it rolled out of bounds.

The free kick from Warrior Run that followed the safety was taken to the 50 to setup a favorable drive for the Blue Jays. They missed a field goal after an 18-yard run from Garrett McNelis help setup the chance. Warrior Run’s defense really played well after the two big plays as it stopped Troy Johnson for a three-yard gain and forced two incomplete passes.

“He just barley missed and I thought it wasn’t his fault,” Dennis said. “I thought we should have scored a touchdown there. That’s what I’m more disappoint in. I thought Mason (Yorty) took a nice swing at it and just missed it.”

Warrior Run’s defense made an early statement with the stop after the safety. Central Columbia gained just 52 yards in its first three possession. McNelis had an 18-yard carry and Johnson broke off a 15-yard run, but that was all for Central Columbia’s offense in the first quarter.

“They were huge to shut down the run game,” Warrior Run coach Chris Long said of the defense. “That’s a big offensive line. They are strong. We made them throw and we got pressure on them with the line. That was the key. We won the defense upfront and that allowed our linebackers to go make plays.”

Warrior Run took a lead in the first half when it ripped off a 14-play drive that covered 85 yards. It was capped when Remington Corderman completed a long pass to Daubert. The 28-yard scoring play was Corderman’s first completion of the half, but it was a big one as it swung the momentum in favor of the Defenders.

Daubert had a 23-yard pickup on a third-and-five to the keep the drive alive. He carried the ball on the next play and picked up more. Daubert carried the ball six times and caught the touchdown on the drive to give the Defender a lead.

“We really needed that, because we need momentum on this team,” Daubert said. “Teams are starting to realize Warrior Run is actually something this year. Our defense was incredible tonight.”

The early deficit was answered by the Blue Jays when McNelis carried the on a keeper for a touchdown. He then completed a pass to Eli Morrison for the two-point conversion and a 10-7 Blue Jays lead.

Central Columbia stayed committed to the run on the drive as Troy Johnson was featured throughout. At one point he carried the ball five consecutive times for a combined total of 30 yards and two first downs.

“This is a real good win for us,” Long said. “We’ve been trying to get by teams like this. It was a good step last week. We haven’t done something like this in a long time.”