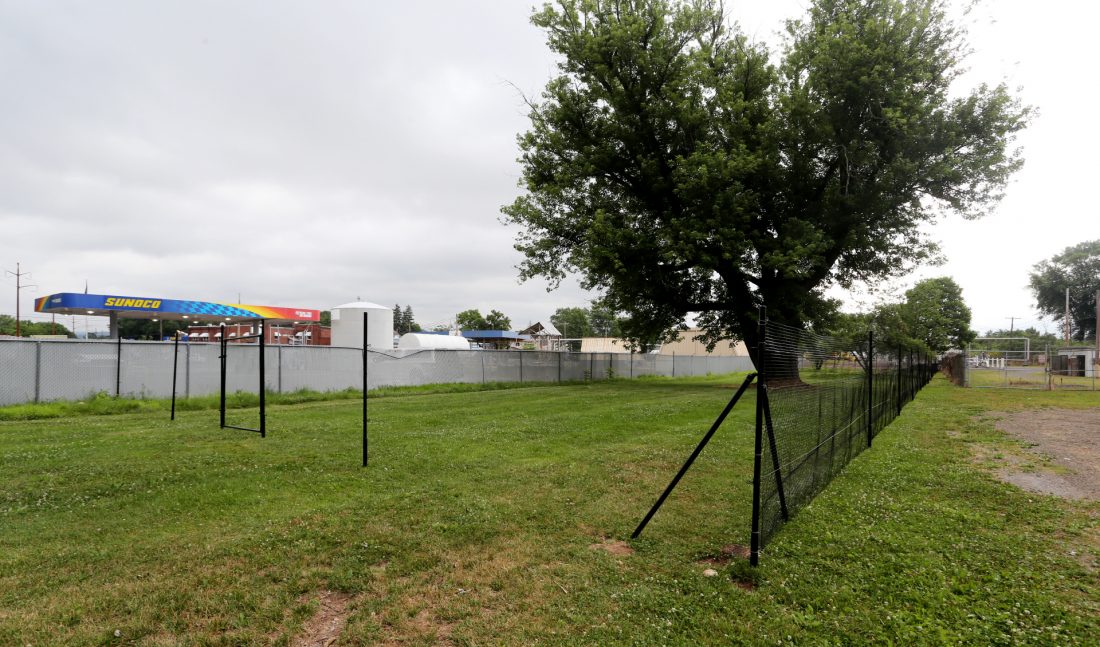 The site of the new dog park along Mill Street in Montoursville. KAREN VIBERT-KENNEDY/Sun-Gazette

Two projects are underway in the south of the borough, as discussed by the Montoursville council, Monday.

Zoe Gillespie, a recent graduate of Montoursville High School, along with other volunteers have been working for the past year to create a dog park along Mill Street, behind the gas station from the Broad Street intersection.

The materials for the fence have arrived and volunteers began installing it Monday.

On Thursday, the dog weighing station and some of the large toys will be installed and by the end of the week most of the park should be completed, she said.

Gillespie, however, does not plan to be present for the opening as she will be joining the Army at the end of this month.

“We’re going to be turning operations over to the council and they’re going to take over installing benches and a couple of other toys that I’d like to have put in,” she said.

Council will determine when the park will open for the public.

During the meeting, Council Member Mark Tillson said he was concerned about dogs escaping from the fenced area or liability of a potential dog bite.

Eric Greenway, council member, said all of the requirements had been met, including proper signage and a lower age limit to prohibit small children from entering.

Also along Mill Street, council approved the final payment to Hammaker East LTD for the road’s improvement for a total cost of about $540,000, paid for by a Multimodal Transportation grant through the state Department of Transportation.

The project included digging out the street to widen it, and paving a new base layer.

In other business, the council:

• Approved an amendment to the zoning ordinance to allow dogs unleashed dogs at the Mill Street dog park.

• Approved an agreement with Comcast of Southeast Pennsylvania

• Approved the borough secretary to sell a 2011 Chevrolet Silverado Truck publicly online or through an electronic auction, and a 1999 Generac generator and switch through the same method

• Approved of the lease with Lamar Advertising for the land of two billboards along Route 15 for $2,600 a year for 5 years.

The next meeting is scheduled for 7 p.m., Aug. 3 in the John Dorin Municipal Building, 617 N. Loyalsock Ave.`