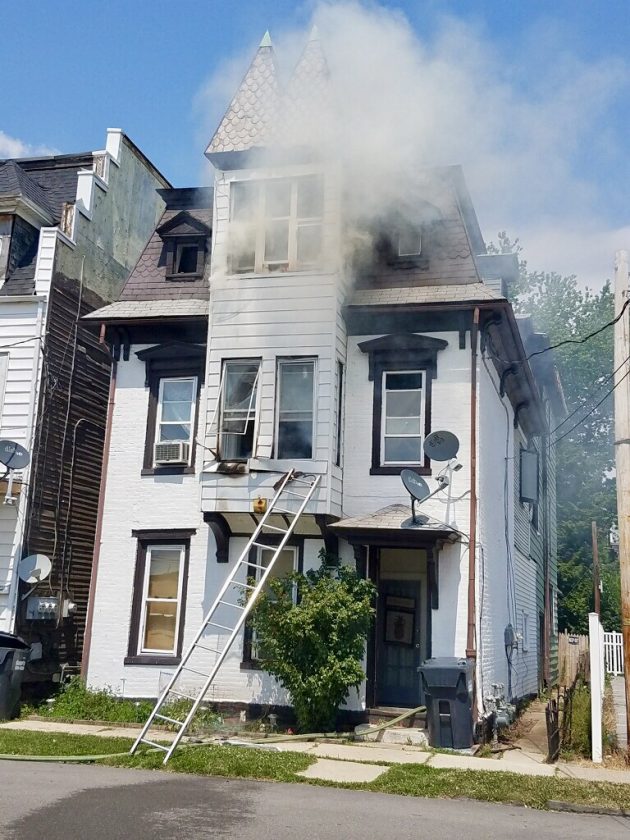 This time the fire was at 614 Pine St., where flames broke out in an exterior wall on the second floor of a three-story three-unit apartment house about 2:20 p.m. Monday.

Everyone in the building made it out safely.

The fire displaced upwards of a dozen occupants, including members of Nicole Williams’ family. She called 911 after her son, Tone, 24, saw smoke coming from a wall at the front of their apartment.

The smoke was coming from the outside of a wall that was at the front of the building.

Williams, her son and her fiance, John Alston, along with Williams’ four grandchildren who are visiting for the summer, safely made their way down an interior stairwell to the street.

On the third floor, Ernest Welch and his 16-year-old son made their way to a fire escape and safely descended a set of stairs.

“A smoke alarm was going off. You could barely smell burnt wood,” Welch said.

Flames were coming from a window of Williams’ apartment when city police reached on the scene. All the tenants were already out when firefighters arrived. A man and a woman lived on the first floor. Their identities were not available Monday night. The woman was not home at the time.

Donning self-containing breathing apparatus, firefighters stretched hoses to the top two floors, quickly dousing the fire. However, a second-alarm was ordered, bringing Old Lycoming Township, South Williamsport and Montoursville volunteer firefighters to the scene to help with breaking up much of the building’s exterior wall and dousing any hidden hot spots.

The local chapter of the American Red Cross was on the scene, helping find emergency shelter for those left homeless by the fire. The cause remained under investigation.

On Saturday afternoon, the American Red Cross was dispatched to another fire in the city — this one at 669 Rose St. — a blaze that left a family of six homeless.

Outdoor temperatures at the time of both fires were in the mid-90s.