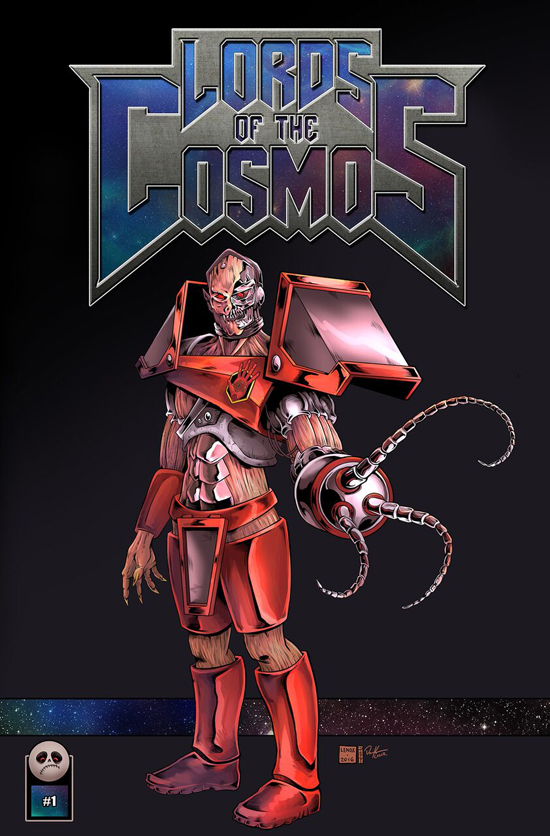 Oh, the days when you could plop down in front of the television with a bowl of grossly sugared-up cereal and waste away a Saturday morning. Though those days may be gone, thankfully we’ve got things like Netflix to get things going when we need an 80s binge.

Of course, there’s an odd balance in how you remember things in your mind’s eye to how they translate years later.  Queue up your favorite action/adventure or sci-fi/fantasy cartoon and you’re likely to scoff at plot holes, queasy animation and outrageous storylines.

Bridging the gap between happy and horror is the new series by local indie authors/illustrators Jason Lenox and friends. I’ve mentioned Lords of the Cosmos in this column before, but now that the issue is in hand, above and beyond initial expectations.

I can only imagine how stressful initiating a Kickstarter project can be, even more so from the creative backend because you’ve got to bust your hump to get out a product to people that have pledged to make it a reality. Lords stresses a unique sci-fi/fantasy/horror with an environmentally heavy thrust as the backbone to the story, apparent from the get-go.

We’re introduced first to the planet Aiden, lulled into a false sense of peace that grows darker and deeper as the story goes on, feeling eerily familiar to Ursula K. LeGuin’s The Ones Who Walk Away From Omelas. Magic and technology have joined forces to bring about the peace that sustains Aiden, yet it is this peace that may bring about its utter devastation.

“But peace is like a drug,” as the story progresses, “dulling the senses and whispering half-truths.” Out past the wastes the story travels, degradation making a strip mine look serene, hail the Disciples of Umex. These hideous creatures and creations live to bring death to the citizens of Aiden and their peace.

The next eight pages introduce a rogues gallery of beasties so hideous, who could ever believe the Disciples’ plans could be thwarted. The main story is bookended by an equally horrific look into how Umex and his minions survive and plot and maim.

There are three additional stories (by Fallon, Freistuhler, Palmatier, Fallon and Newbold) reminiscent of those mini-comics you’d find with your He-Man action figures, creating backstory and origin that deepen the reality of this world. There’s even a throwback cover featuring a mock-up of an action figure complete with stats and information, even a price tag and notch where you’d place it on the stands. The campaign video is still up in all its awesome 80s glory, complete with retro company log, VCR screen static and heavy metal soundtrack.

Lenox’s Lords of the Cosmos second issue is projected to have a Kickstarter date in September. In the meantime, you can find yourself a copy of Lords of the Cosmos (and other works) at the new Williamsport Comic Con April 23 or at Nittany Con in State College Sept. 23 and 24. You can also order directly at jasonlenox.com.

“The Oracular Beard,” aka Jared A. Conti, resides in the upper echelon of nerd-dom, meditating on comics and the like for sustenance.

He currently is at work on a post-apocalyptic young adult novel series set in central Pennsylvania, as well as a superhero short story collection. His alter-ego is a barista at Avenue 209 Coffee House in Lock Haven. “The Oracular Beard … So you wanna be a comic book nerd” typically runs the first Thursday of each month in the Showcase.

All that’s left is waiting for PIAA’s decision