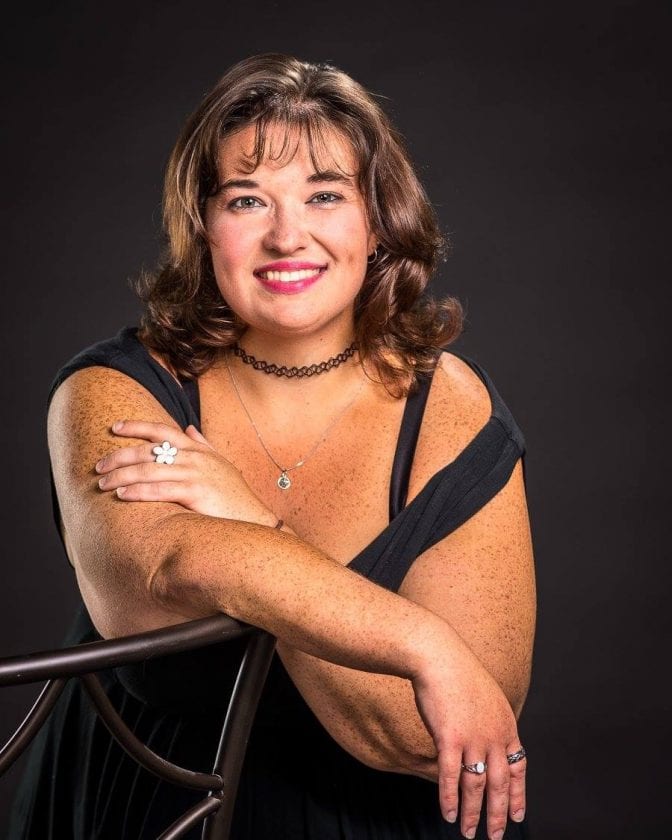 LEWISBURG — It may be somewhat commonplace for an actor to increase casting opportunities by beginning to vocalize, thereby displaying a certain versatility and some musical theater ability. It is, however, relatively rare for a vocalist or musician to switch gears, and seek out acting roles after heavily concentrating on music — but that exactly explains Amy Straub’s passion for both music and acting.

Straub was born in Gratz, and currently resides in Lewisburg. Her earliest memories are of singing since she was 3 years old, and include singing in some “pretty interesting places: St. Patrick’s Cathedral, West Point, Phillies/Orioles game, Hershey’s Christmas Candy Lane, and 150 feet underground in Howe Caverns in New York.”

A graduate of Upper Dauphin Area High School in 2002, Straub traveled around Pennsylvania and surrounding states with her high school’s Glee Club, and performed in its productions of “Once Upon A Mattress” and “Grease.”

“I’ve always been hyper-focused on media production, spending my time behind the camera, not in front of it. I never tried acting in college, and it’s something I regret,” Straub said.

Acting is a relatively new venture for Straub , as she always thought singing was her “art”. She was really surprised then when she “fell in love with acting”.

When she auditioned for the Courtyard Theatre’s “Rent,” Straub, who hadn’t been on stage in 12 years, was hooked.

After her first role in a non-musical (“Deathtrap” in 1994), Straub appeared in a trio of plays for the Courtyard Theatre, Valley Players, and the Community Theatre League. Her most recent role was in CTL’s season-closing production of “The Glitter Girls.”

As her favorite roles, she lists Blanche DuBois in RiverStage’s “A Streetcar Named Desire” in 2018, and Becca in the Community Theatre League’s “Rabbit Hole” earlier this year.

She served as music director and sound producer for the Courtyard Theatre’s “Rocky Horror Picture Show” in 2015, and is looking forward to being in the Director’s Chair for CTL’s “The Last Five Years,” slated for the Moyer Studio Series in 2020.

The 35-year-old Income Maintenance Caseworker for the Pennsylvania Department of Human Services also has almost 20 years of broadcast experience as Amy Knight, an on-air personality for the Sunbury Broadcasting Corporation.

Straub proudly proclaimed that, “We are so lucky to live in an area with such a robust theater community. Art is growing and thriving in rural Pa., and that is so exciting!

“Think about it. For two solid months, a bunch of folks in your town come together and work tirelessly to create something out of nothing,” she added. “They are your friends, co-workers, and family members — all devoting their time just to entertain you. Poof! Art! It’s really magical, and it can truly be a transformative experience — for people in the audience and on the stage.”