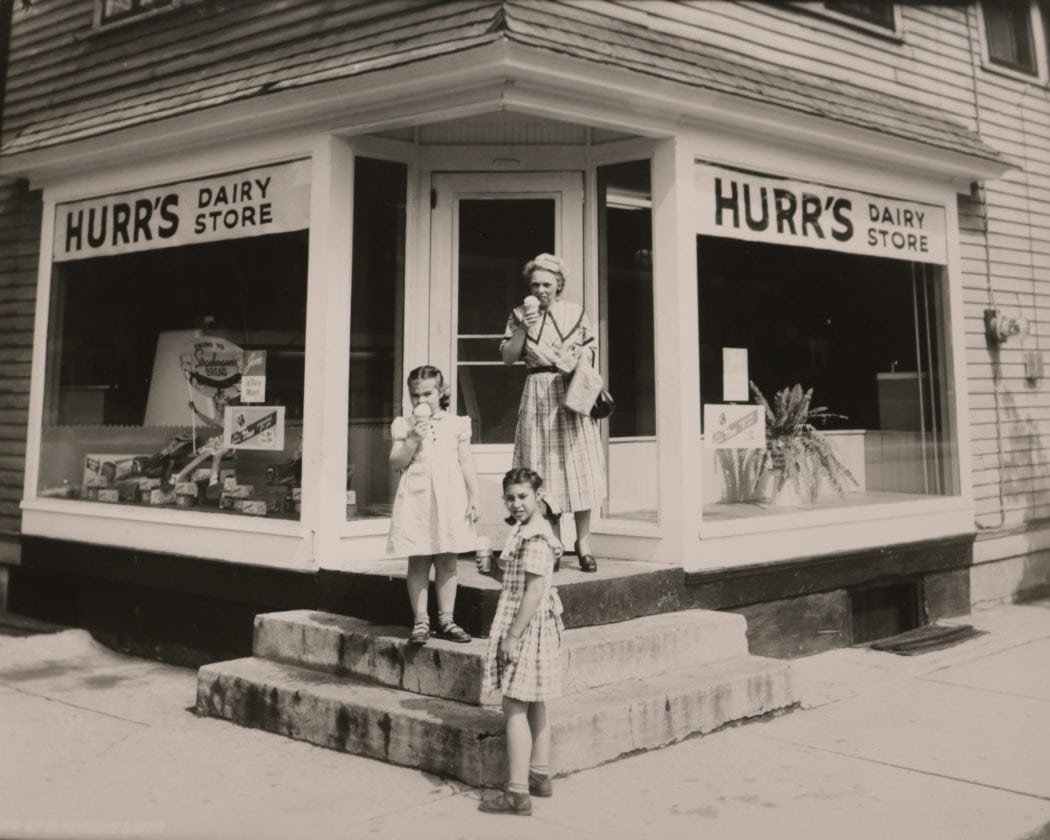 The wonderful idea of using cream to make ice cream in the late 1920s and ’30s didn’t go unnoticed locally. Some businessmen, such as John Hurr, rose to the top, just like the cream from which he spun his sweet confection.

At the age of 89, Dick Miller of the city remembers going to the Hurr’s store on Fifth Avenue for chocolate mint milkshakes and egg salad sandwiches with the crust cut off. When he was about 11 years old, he helped Howard Goodbrod from South Williamsport deliver Hurr’s milk on a wagon at 4 a.m. before school.

“The wagon was pulled by a white horse named Bill and he knew the way. The quart of milk was in glass

bottles and in the winter it would freeze and the cream would float on top,” Miller said. “If we could pop the top before Mom saw, we would cut the cream off and that was ice cream for us.”

He added, “There was a Hurr’s Dairy on Market Street, in South Side and one in Newberry. If they could have stuck with it and kept it going, they would have been the original Turkey Hill now.”

Hurr’s Dairy formed in 1921 and was an 11-county operation with 12 stores in the area and the main Hurr’s Dairy plant in South Williamsport.

Founder John H. Hurr began working at the George Wakenhut Dairy in 1906 to learn about the ice cream business, according to a 1953 Grit article.

He made ice cream behind his home in a shed and delivered it by bicycle. By 1915, he went into business for himself, expanding his business in 1921 and forming the Williamsport Milk Products Co. From 1921 to 1948, he delivered his dairy products by horse-drawn wagon. Hurr died in 1954 and by 1975 Hurr’s Dairy merged with Susquehanna Valley Farms.

Miller said he doesn’t have a favorite ice cream flavor. “I like it all,” he said. “Chocolate, maybe, but I’m not choosy.”

Some of the nation’s first presidents weren’t picky either. Records of a Chatham Street, New York, merchant show that President George Washington spent about $200 for ice cream during the summer of 1790, according to the International Dairy Foods Association.

The first official account of ice cream in America comes from a letter written in 1744 by a guest of Maryland Governor William Bladen, according to the association.

Until 1800, when insulated ice houses were invented, ice cream was a rare and exotic confection enjoyed mainly by the elite.

On Sept. 9, 1843, Nancy M. Johnson, of Philadelphia, patented an artificial freezer to make ice cream. It featured a tub, cylinder, lid, dasher and crank and still is used widely today, according to the association.

Margaret McClain, 88, of Cogan Station, remembers making homemade ice cream. “We never had much ice cream but what we did have we made homemade,” she said. “We would get extra ice from the ice man, put the milk and ingredients in the can and then turn the crank until it got hard. It was a big thing for us kids. We all took turns turning the crank.

“Mom covered the can with something heavy like a tablecloth to keep the coldness in and it was always wonderful. We made strawberry because we would pick them or vanilla. Sometimes Mom would make a peanut butter syrup to pour over the vanilla.”

Much like Fussell, Bruce Eder began his ice cream business in 1927 as a way to use the excess milk from his dairy farm in Montoursville. He bought an Emery-Thompson batch freezer and built his store in 1933.

A batch freezer is a large freezing chamber that mixes, agitates and freezes whatever is put into it, according to Rob Labatch, Eder’s Ice Cream co-owner. Originally the store sold root beer, penny candy, Wonder bread, quart-sized glass bottles of milk and strawberry, vanilla and chocolate ice cream, according to Labatch. It was his wife Melissa’s grandfather, Pappy Bruce, who started the family-owned and operated business. Though the ice cream may be bought at some restaurants and events, it has never been distributed in grocery stores, he said.

In the 1940s through the ’70s, with prepackaged ice cream sold in supermarkets, traditional ice cream parlors and soda fountains began to disappear.

“One of the first places I had soft ice cream was Schon’s Tastee Freez,” said Tom Gouldy, of Montoursville. “It was the biggest hangout. You could get chocolate or vanilla or twirl with sprinkles. Everyone used to go there.”

George Holmes, of Montoursville, remembers going to Hurr’s Dairy in Montoursville. “It was a hang-out after school before we were of driving age,” Holmes said. “It was the 1950s so there was not a lot of spare money. We could get a one- or two-dip ice cream cone for 10 cents or a milkshake for 25 cents. The basic flavors were vanilla, chocolate, strawberry, teaberry or butter pecan.”