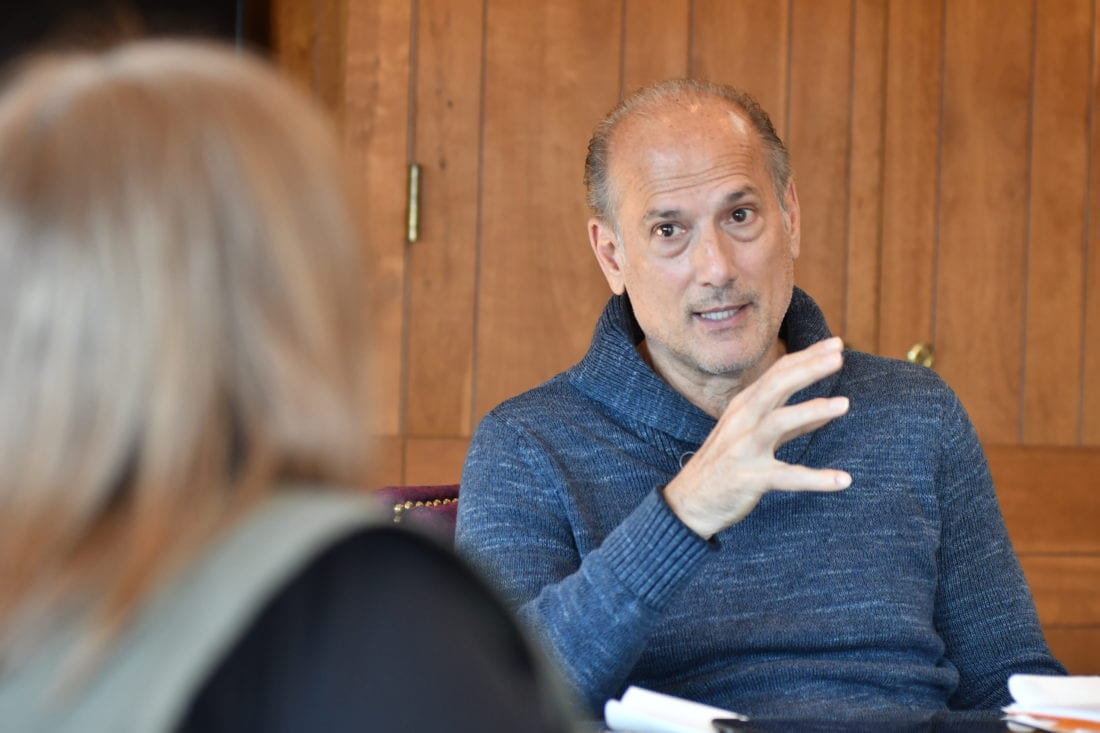 And, he’s ready to head back to Washington, D.C. for another two years to fight for the policies and issues that he feels must be addressed.

Meeting this week with the Sun-Gazette, the congressman said he has been campaigning hard to get out his message to people.

Unlike some candidates heading up to the last few weeks to election, Marino has not blitzed television viewers with campaigning advertising.

Marino is facing a challenge from Democrat Marc Friedenberg for the 12th House seat.

Since being elected to Congress, Marino has not wavered from his stance on term limits for lawmakers.

He said he’ll seek just one more term if he wins this election.

Congress, he said, is filled with far too many members who do nothing and simply want to hold onto their jobs.

He called Democrats like Nancy Pelosi, the former House speaker, and Sen. Chuck Schumer, are “bad people” who need to go.

He said he doesn’t see a lot of support for term limits, although he fells the issue is gaining some momentum.

Marino said the U.S. cannot be over-run by caravans of Central American migrants who are walking to the border seeking asylum.

But he added he understands the basic desire of people wanting better lives for their families in America.

More than 5,000 military troops are reportedly being sent to the Mexican border to stave off the caravans.

“The military will stop it as peacefully as possible,” Marino said.

Marino was among House members who voted in favor of the legislation several years ago.

“We have to make sure insurance is affordable,” he said.

Regarding health insurance, Marino said he does not support policies that prevent those with pre-existing health conditions from being covered.

However, he made it clear that he supports ways for incentivizing people to take preventive measures to stay healthy.

He said he cannot support any efforts toward a single payer health care system.

In nations where it exists, too many people are left waiting to receive health care, according to Marino. In addition, he said in many cases the health care is not up to the standards of the U.S.

Marino said there are ways to lower the cost of health care, including allowing people to purchase insurance out of state.

“That brings competition,” he said.

Marino said reducing the price of drugs must also be addressed.

Meanwhile, Medicare, Medicaid and Social Security costs continue to be a big problem.

The good news, he said, is the healthy economy has put more people to work who are paying taxes needed to support those programs.

Reducing the size of government, he noted, can help save dollars.

“We have to downsize Washington and get rid of these agencies we don’t need,” he said.

He said he isn’t sure raising the age of retirement for Social Security benefits is the way to go.

People with physically demanding jobs may need to retire earlier than other types of workers.

“This one-size-fits-all doesn’t work,” he said.

Marino said the U.S. continues to fall behind other industrialized nations in education, a problem that is making it difficult for employers to find highly skilled workers.

“We don’t have the talent here,” he said.

He said public education is only part of the problem with many teachers having to take on multiple roles.

He called for eliminating the Department of Education, while noting it could operate in an advisory capacity.

His bill, the Rural Broadband Connectivity Act, would provide a tax credit to entities that make investments in broadband infrastructure providing service to rural areas.