Coronavirus, other factors result in billions paid for unemployment 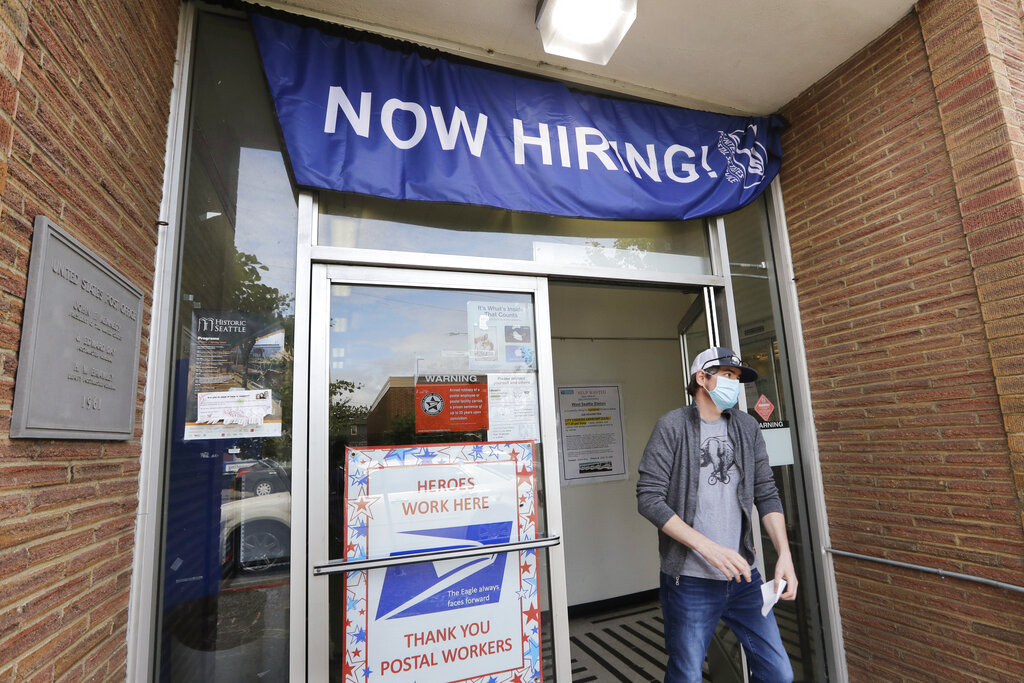 FILE - In this June 4, 2020, file photo, a customer walks out of a U.S. Post Office branch and under a banner advertising a job opening, in Seattle. The U.S. government will issue its latest snapshot Thursday, June 18, of the layoffs that have left millions unemployed but have slowed as businesses have increasingly reopened and rehired some of their laid-off workers. (AP Photo/Elaine Thompson, File)

The state has paid out $18 billion in unemployment claims since March 15.

“That’s 18 with a B,” said Jerry Oleksiak, secretary of the Department of Labor and Industry in a conference call with reporters Monday.

Some 90 percent of the claimants who filed between March 15 and May 16 have received their payments as of June 15, he said.

The department, which had overwhelmed telephone lines and urged individuals who were jobless to file using the state website, has logged 157,000 total overtime hours.

The surge in claims for unemployment compensation resulted in the department service staff increasing from 775 people to 1,349 employees, and more than those who have finished training, including retirees and other agency personnel, he said.

Sadly, the coronavirus pandemic led to fraud and the department began to work with state and federal investigatory agencies to seek criminal justice, he said.

The initial discovery of the fraudulent claims was made over the Memorial Day weekend, Oleksiak said.

The department began to put a hold on about 58,000 claims.

“Not all were fraudulent and a majority of them were verified as authentic,” he said.

That investigation continues but Oleksiak said due to the nature of the ongoing probe he was reluctant to provide further details.

The department has done four “virtual town halls,” Oleksiak said. A fifth such event will take place Thursday and individuals can join it by logging onto access.live.palabor or calling 833-380-0719 to listen in, he said.

Extended unemployment benefits will start soon. In coming weeks, starting next week, individuals who file for their final federal benefits, or the extra $600, will have exhausted those benefits, said Susan Dickinson, department compensation benefits policy director.

The financial statement will be in so there can be an extension of nine to 13 weeks and they will begin to receive half of what they were on their claim before, she said.

The system has switched to a debit card to receive payments if remaining unemployed, she said.