Lycoming County Women: The Suffrage Movement in Williamsport and beyond 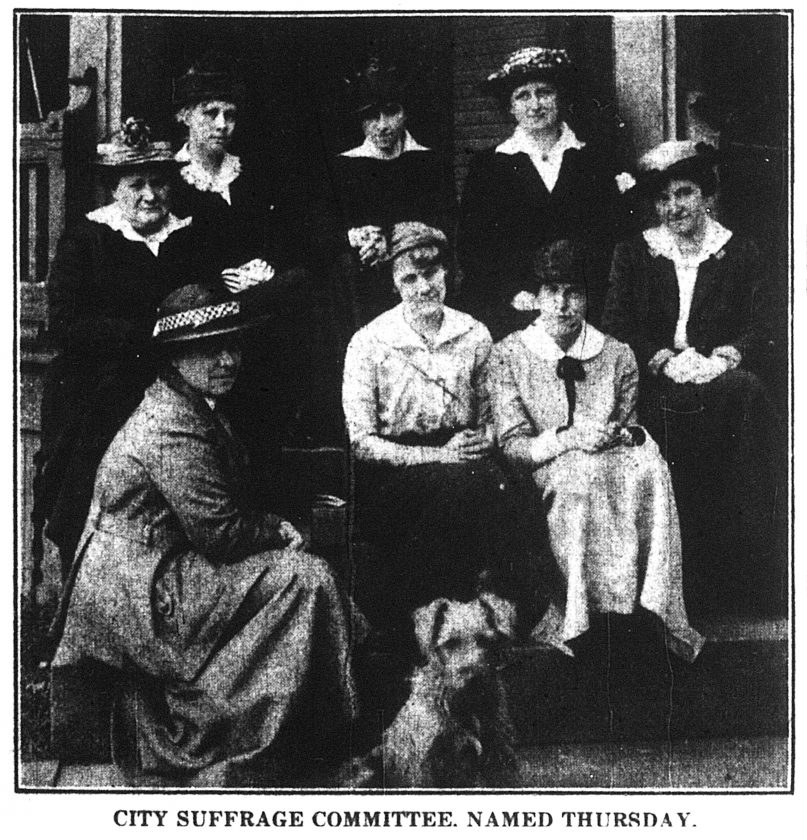 PHOTOS PROVIDED A reproduced image of Henrietta Baldy Lycon from Thomas A. LloydÕs ÒHistory of Lycoming County,Ó at top left. A pictured of Louise Chatham, provided by the Lycoming County Historical Society. A 1935 campaign photograph of Edith B. DeWitt. This photograph is of the City Suffrage Committee published on May 9, 1915, in the Williamsport Grit, at top right. Louise Hall speaks from the back of the vehicle holding the Liberty Bell and a ÒVotes for WomenÓ banner during a suffrage campaign stop in Pennsylvania in 1915. This photo was provided by the Schlesinger Library, Radcliffe Institute, Harvard University. At center, the PENNA Votes for Women pin was used as part of the local suffrage campaign.

Suffrage was on the minds of many Lycoming County women and men as early as the 19th century. When Susan B. Anthony spoke in Williamsport in November 1870, she drew a large crowd. By the mid-1910s, there was potential for actually achieving suffrage for Pennsylvania women. Nine states and Alaska had already extended the right to vote to women.

Many Lycoming County women were among those who organized. Williamsport women formed a Suffrage Club in January 1914, with its headquarters on Pine Street in Williamsport. Mrs. Robert F. Allen, of South Williamsport, gave the remarks at the opening. Not only was there a Lycoming County chapter of the Pennsylvania Woman Suffrage Association, but there were “clubs” in all almost all of the Lycoming County towns — including Muncy, Hughesville, Montgomery, Jersey Shore, South Williamsport, Montoursville, Picture Rocks and Pennsdale. The records of these clubs have been lost, but a partial history can be reconstructed from newspaper articles.

A year later, in September 1915, another group of local women and men formed an Anti-Suffrage Club, according to the Williamsport Sun-Gazette on Sept. 8, 1915. Their inaugural meeting, held in the Court House, was packed with folks who did “not want to see woman brought down to level of man.” Their officers were listed as “Mrs. Dr. H.G. McCormick, Miss. Rebecca Foresman, Mrs. Dr. J. Rishell, Miss. Catherin Reardon, Miss. Catherine Sheffel and the Misses Lowe.”

Many active members of the Suffrage Club were also members of other women’s organizations, including the Clio Club, the College Club, the Business and Professional Women’s Club, the Civil Club and the Home and School League.

The campaign in Pennsylvania

The local campaign was focused on education, unlike the more radical suffrage campaigns in England and Washington, D.C., which fostered civil disobedience. Alice Paul organized a large demonstration in Washington, D.C. at the inauguration of President Woodrow Wilson in 1913. According to the Alice Paul Institute, the suffragists arrested at that demonstration were sent to Occoquan Workhouse in Virginia, where they organized hunger strikes and were force fed.

The Pennsylvania campaign was focused on the state level, not the national level. In 1915, in Pennsylvania, activists were successful in persuading state legislators to pass a resolution allowing for a state-wide referendum on extending voting rights to women. The votes were to be tallied by county. Local women were very active in the campaign. They organized each ward and precinct in the county, electing a chairwoman for each, and went door to door with campaign literature, sometimes on their bicycles. They had a speakers’ bureau, spoke publicly whenever they had a chance and wrote newspaper and magazine articles.

In the summer of 1915, according to the Justice Bell Foundation, “suffragists in Pennsylvania were looking for a way to drum up support for an amendment to the state constitution that would give women the right to vote.” A referendum to approve such an amendment would appear on the ballot in the November election, so there was no time to waste. They needed to launch a campaign to win the hearts and minds of the male voters who would go to the polls. They needed to create some buzz.

“That’s when Chester County activist Katharine Wentworth Ruschenberger came up with an idea. Why not make a replica of the Liberty Bell, one of the nation’s most enduring symbols of freedom, and drive it around the state on a multi-county tour? Throw in a few parades, some brass bands and an assortment of flags and banners, and who wouldn’t sit up and take notice?”

Lycoming County was on the tour. The bell, on the back of a flatbed truck, followed Route 220 from Jersey Shore to Williamsport and through Tivoli to Sullivan County.

In September 1915, Committee member Henrietta Baldy Lyon, featured in the Lycoming County Women column, formerly Williamsport Women, on April 13, 2014, held many positions during her tenure in the organization, was elected chair of the Lycoming County Suffrage Party. She made several speaking tours across Pennsylvania.

Undaunted, the next year the statewide Pennsylvania Woman Suffrage Association held its 48th annual convention in Williamsport. The program for that meeting is on display at the Lycoming County Historical Society and can be accessed online in the Lycoming County Women’s History Collection.

Listed in the program are members of the local convention committee, mostly women who had been active from the beginning. The General Chairman was Mrs. R. Fleming Allen; Automobile Committee Chairman was Mrs. Lucius C. Sweeley. Mrs. Howard Cheyney was in charge of the banquet, Mrs. Newton Chatham was in charge of decoration and Miss. Ellen Reading was chair of the Platform Committee.

The war and its aftermath

After the United States declared war on Germany, many suffragists turned their attention to war work. For example, Henrietta Baldy Lyon, who was college educated, was the chair of the Women’s Library Loan Committee and active in the Red Cross, the Food Committee and the Speakers Bureau.

Many historians believe that women’s war work not only sharpened their organizational skills but also earned them the respect of leaders in the state and the nation. After the end of the war in November 1918, they again turned their attention to suffrage.

This time, the focus of the campaign moved to the federal level. The goal was to pressure President Woodrow Wilson into supporting congressional passage of a woman suffrage amendment. Complicating the campaign was the outbreak of the Spanish flu in 1918. According to a recent article by Alisha Haridasani Gupta, “Suffragists found themselves making their case amid the panic of a pandemic. Illness was everywhere, gatherings were banned and canceled plans became the norm,” as published in the article “How the Spanish Flu Almost Upended Women’s Suffrage,” published in the New York Times on April 28, 2020.

At first, some opponents of the amendment were concerned that if women were given the right to vote, they would vote for prohibition, not a popular stance in German beer drinking Pennsylvania. However, that became a non-issue when the 18th amendment, prohibition, was ratified by the states on Jan. 16, 1919.

Among the Williamsport area women who took important leadership positions was committee member Mrs. Robert Fleming Allen, featured on Sept. 10, 2017, in the Williamsport Sun-Gazette. Born Edith Bennington, in South Williamsport, she chaired the local suffrage movement for several years and was very active across the state. In 1916, she held statewide office as the treasurer of the Pennsylvania Woman Suffrage Association.

Later, as Edith DeWitt, after her first husband died, she played an exceptionally important role in local and state politics and in the Democratic Party. She was elected a delegate to the national presidential nominating conventions in 1924 and 1943, and she served as Pennsylvania’s deputy secretary for Welfare and deputy state treasurer. In 1930, she ran for the office of secretary for Internal Affairs, but she was defeated.

Committee member Mrs. Newton C. Chathamwas featured in the Jan. 10, 2016, Williamsport Women column. Born Louise Lazelere, she participated in local civic groups and chaired the local suffrage group. In 1911, she was the first female candidate for Williamsport School Committee, a post she did not win. She was well known as a musician and very involved in civic affairs, especially organizations that promoted higher education for women, such as the Home and School League and the Delphian Club.

The first presidential election in which women could vote was the 1920 contest in which Warren G. Harding, Republican, defeated the Democratic contender, James M. Cox. On election night, the Williamsport YWCA hosted an open house for the women of Lycoming County, giving them an opportunity to attend a general rally and to listen to the election returns. Local activists celebrated the dream that had come true because of their hard work and steadfastness.