‘The Lion King’ remake isn’t as good as the original, is still worth watching 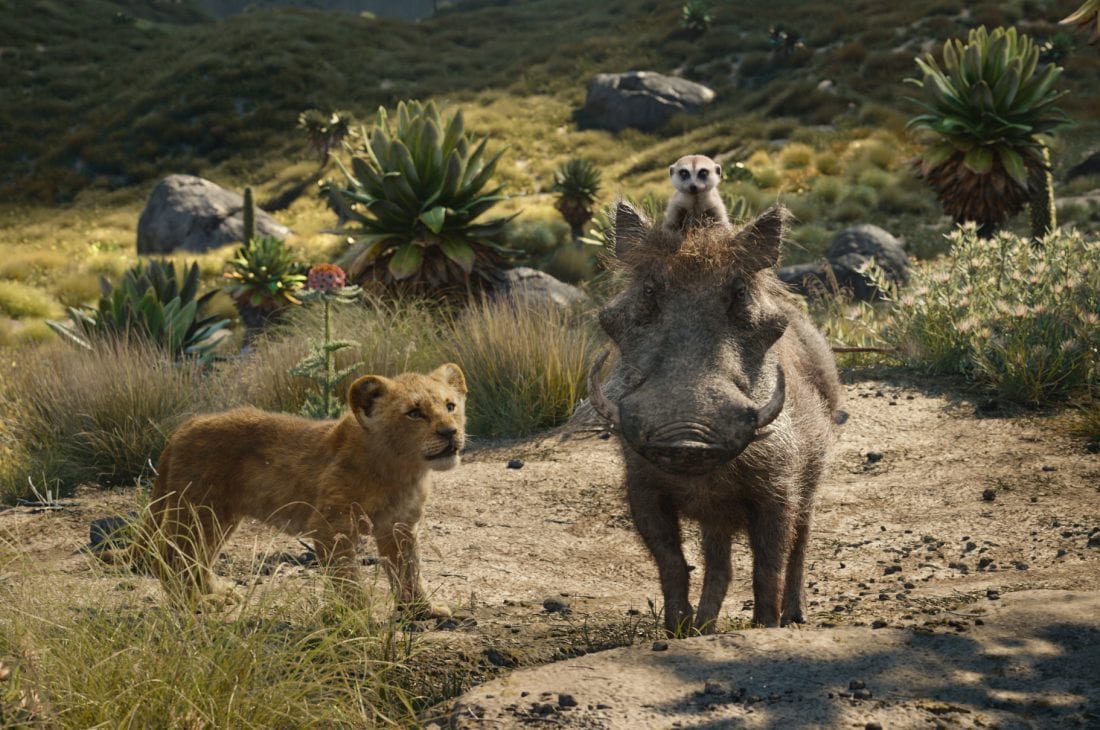 FILE - This file image released by Disney shows, from left, young Simba, voiced by JD McCrary, Timon, voiced by Billy Eichner, and Pumbaa, voiced by Seth Rogen, in a scene from "The Lion King." The Walt Disney Co. is ruling the box office again with the record-breaking debut of “The Lion King” this weekend. The studio says Sunday, July 21, 2019 that the photorealistic remake devoured an estimated $185 million in ticket sales from 4,725 North American locations. It’s a record for the month of July, PG-rated films and the ninth highest opening of all time.(Disney via AP, File)

Gorgeous, funny, thoughtful and entertaining, Disney’s reboot of “The Lion King” nonetheless has one substantial flaw:

It isn’t as good as the first film.

Of course, that beloved 1994 smash — still the top-grossing hand-drawn film of all time — set the bar impossibly high; and if this new one were not a remake, it would be getting much stronger reviews.

In fact, Jon Favreau’s live-action update has much to recommend it. First among these factors is … well, Jon Favreau — a proven director of crowd-pleasing blockbusters (“Elf,” “Iron Man I and II”; and don’t miss his tasty little 2014 sleeper “Chef”).

Favreau brings to this project all the tender loving care we saw in his recent “Jungle Book”; in fact, the visuals here are even more impressive. The mix of animated animals with crystal-clear photography of skies, streams and mountains is seamless. The movie is worth watching for this alone.

Meanwhile, “Lion King’s” story-arc remains as stirring as ever; Hans Zimmer’s incidental score is a wonder; and most of the jokes still work — even those lifted from the first film.

Yet the movie fumbles with its classic tunes. By “Africanizing” everything — and putting vocals into the hands of folks who sometimes cannot actually sing — they’ve taken the pop-music polish off those irresistible Elton John compositions. Pretty much all of them are disappointing; the only thing that definitely works here is, ironically, a piece not written for either film: “The Lion Sleeps Tonight” (can you believe this was originally penned in 1939!).

And speaking of vocal work: Chiwetel Ejiofor is excellent as Scar; so is John Kani as Rafiki; and James Earl Jones, reprising his work as Mufasa, is masterful. But much of the rest of the voice cast felt sub-par. I for one really missed Nathan Lane’s Timon.

Despite these shortcomings, the movie’s big emotional moments all succeed. Though it’s longer, the new version doesn’t drag (its climactic fight is notably terse). And Jeff Nathanson’s script foregrounds the gripping conflict between good and evil, along with the need to commit to causes despite the cost — rather than prancing around all day eating grubs and singing “Hakuna Matata.”

I’m not sure the world really needed another “Lion King” (and for the record, I’m certain it doesn’t need another “Mulan”); likewise, Disney surely doesn’t need all the money this film is going to make.

But the movie’s tepid 55% at Rotten Tomatoes does not reflect the satisfaction viewers will feel when they leave the theater — a feeling for which you can thank Favreau; the man couldn’t make a bad movie if he tried.