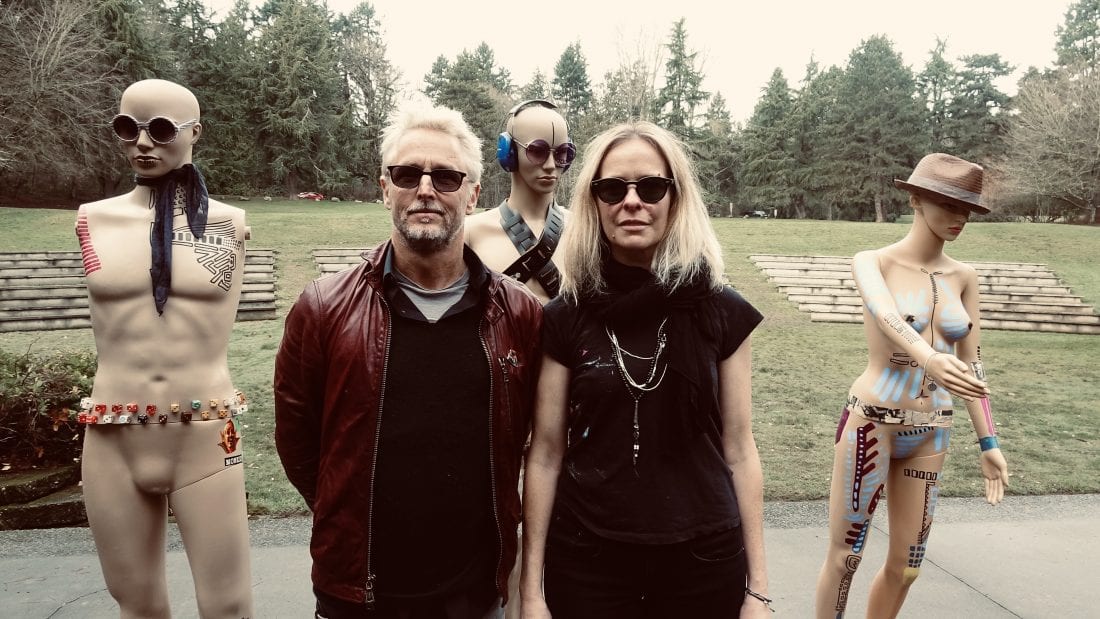 For the better part of three decades, Pearl Jam fans have watched guitarist Mike McCready approach live performances with an energetic style that is as focused as it is instinctive. Now the Rock and Roll Hall of Famer is bringing that same fervor to his newest project, Infinite Color & Sound, which is a visual art and music collaboration with painter Kate Neckel. Together the duo puts on an intimate and interactive show that sees them get out of the their comfort zones while they take turns playing music and creating pieces of visual art.

After several performances in the Northwest, Infinite Color & Sound will finally be coming to the East Coast this month, with shows scheduled for New York City (Sept. 19) and New Jersey (Sept. 21-22).

“I am really thrilled and nervous, but also exhilarated,” McCready said, of the upcoming performances. “It’s exciting and I think we are putting more work into this (exhibit) than we did the other ones, because this one feels very real and important.”

McCready and Neckel first met about two years ago after McCready’s wife, Ashley O’Connor, had seen some of Neckel’s work at the Seattle Art Fair. McCready missed the show by one day, but after listening to his wife rave about the artist’s paintings, the two went to check out some of Neckel’s creations at the Winston Wachter gallery in Seattle. It was there that he told Neckel about his dream of one day working on a multimedia art show.

“I kind of casually mentioned that I always wanted to do something like a Warhol factory or a mixed-media type of thing for the last 25-30 years, but I just never have done it,” McCready said. “She responded immediately and understood what that kind of was, even though I didn’t really know what it was. Then, we just kind of took it from there.”

Not long after that encounter, Neckel was at McCready’s house with a roll of canvas and a set of paints. Things started out with her painting while McCready scored what she was doing with a guitar and mellotron, but eventually evolved into something more vulnerable for both of them when Neckel took on the role of musician while McCready painted.

“It was terrifying to me because I’d not done that before,” McCready said. “But that was fun, too. It was kind of a growth thing.”

With that experience helping the two bond through the worlds of color and sound, McCready and Neckel would then see their concept transform into what it has become today — a show that features art forms including music, painting, Polaroid collages, sculpture and drawing.

Neckel feels that the chemistry the two share during their performances is based on the foundation of confidence they have in one another.

“I think with how we create, it is based on feeling, and so we both have to be open and trust each other,” she said. “I feel like I trust his hands like my own. It’s a rare thing.”

That sentiment is shared by McCready, who also described their chemistry as “intense,” adding that “there are a lot of emotions going on.”

One of the best things about the project for McCready and Neckel is that it has opened new artistic doors for each of them, which has been both liberating and thrilling.

Despite growing up with an art teacher for a mother, McCready was always intimidated by creating visual art, and preferred to express himself in the realm that he was most comfortable — music. Conversely, Neckel, whose paintings have been featured on billboards and in magazines, had always been too scared to try her hand at singing before teaming up for Infinite Color & Sound.

“He has just given me this freedom to create and craft songs, and it has been a beautiful and exciting thing,” Neckel said. “It is a whole new way of expressing myself and I love it so much.”

“I feel more comfortable in my band situation than I have before, in terms of artistically contributing,” he added. “That has been a big thing for me because I get locked into a role in Pearl Jam in my mind, and then Kate has allowed me to go ‘well maybe I don’t need to be locked in that role.’ That is pretty cool.”

McCready and Neckel both agreed that the scariest part of the whole show is singing in front of an audience.

“I have worked with so many great singers over the years, and I am always like ‘how do they do it?’ I am always in awe of them,” McCready said. “When it comes down to being in front of an audience, there is a whole thing that changes — the dynamic changes; there is people and there are eyes on you. My insecurities that I have all come out.”

“Every time we do it, it feels like exercise,” Neckel said. “It’s like a monthly thing, like, ‘Oh yeah, we are doing this again. We survived the last time, and we will survive again.'”

With Infinite Color & Sound pushing both of them into unfamiliar territory, having each other to lean on during performances has been important to McCready and Neckel. Facing their fears together, they said, has made the whole process that much easier.

“I feel like we are kind of in this thing together, and if I am feeling weird about something and it is going in a (bad) direction, I can kind of look at Kate and it’s like ‘okay, I’m back in it,'” said McCready. “It’s helpful that I’m not just up there doing it by myself.

“I wouldn’t do this without her, I don’t think,” he added.

When asked what themes are conveyed by the art in their performance, both agreed that it can vary from show to show, depending on their respective moods. But they also mentioned that there are always elements of vulnerability, playfulness, learning and growth that shine through.

“I hadn’t really thought about (the themes), really. We just kind of do it,” McCready said. “It is kind of trusting what I am feeling that day, or what we are feeling.”

One of the more interesting aspects of previous Infinite Color & Sound performances has been the duo’s use of mannequins as props. Though McCready joked that “the mannequins are kind of mad at us right now,” because some of them won’t make the East Coast trip, the upcoming shows will still include a few of them. Their incorporation in the show started with an arm that Neckel had lying around her studio and snowballed from there.

“My brain goes, ‘Well if one mannequin is good, let’s get 10.’ So that is kind of how it happened,” McCready said. “Then Kate painted on one and I put some Polaroids on one.

Though there aren’t any Infinite Color & Sound performances currently scheduled for after this month, McCready and Neckel both said they want to keep the door open for returning to the project down the road.

“I think it’s something that we can have as an open thing to do for however long we want to do it,” said McCready. “I hesitate to ever say ‘this is the end.’ It is always good to leave things open, because there could be new influences or there could be new people that we work with. That is the infinite part about it, I guess.”