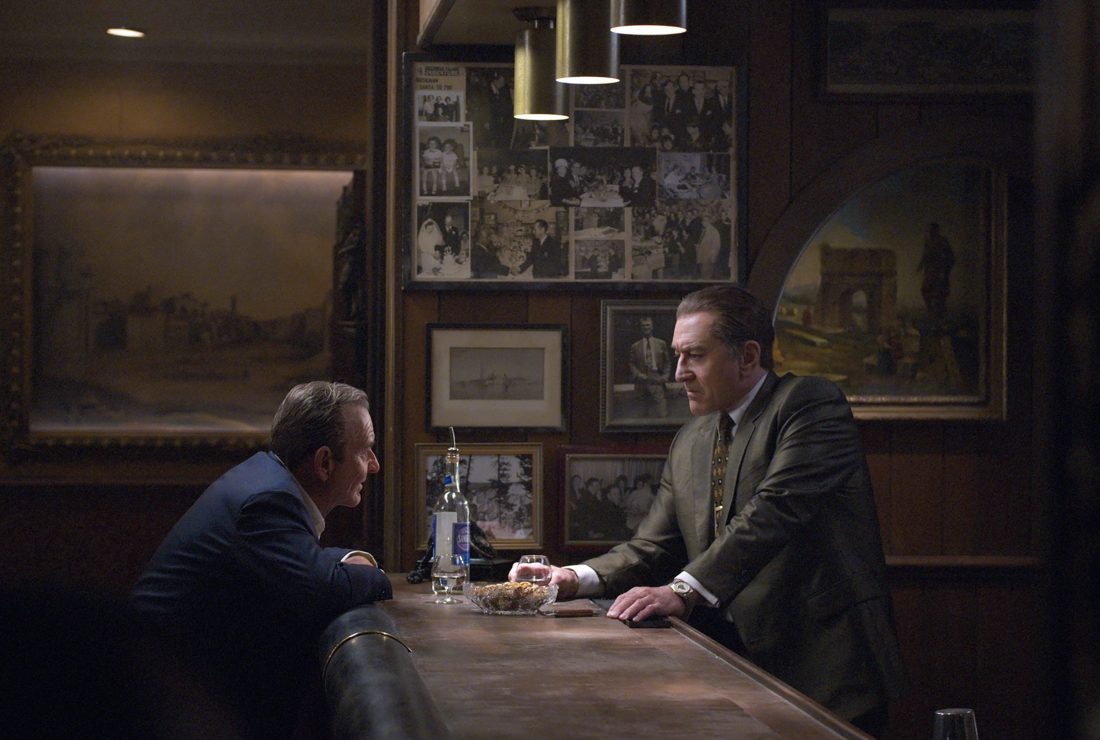 This image released by Netflix shows Joe Pesci, left, and Robert De Niro in a scene from "The Irishman." AARP has released nominations for its annual Movies for Grownups awards, which is designed to reward films that resonate with older viewers and fight industry ageism. AARP The Magazine on Tuesday, Nov. 26, 2019 nominated “A Beautiful Day in the Neighborhood,” “Bombshell,” “Little Women,” “Marriage Story,” “Once Upon a Time in Hollywood,” “The Farewell,” “The Irishman” and “The Two Popes” for the best picture/best movie category. (Niko Tavernise/Netflix via AP)

With “The Irishman,” Martin Scorsese strikes me as an old pro who specialized in violent gangsters and is now reevaluating his legacy.

After a brief theatrical release in November, the director’s sprawling new movie is currently streaming on Netflix — which ponied up its $159 million budget. Having lured Joe Pesci out of retirement for its all-star cast, “The Irishman” focuses on real-life mobsters Frank Sheeran (Robert De Niro) and Russell Buffalino (Pesci) as they work together with union organizer Jimmy Hoffa (Al Pacino).

With the help of veteran screenwriter Steve Zaillian (“Schindler’s List,” “Awakenings,” “Moneyball”), the film holds our interest over its daunting three-and-a-half-hour runtime. It’s less edgy and kinetic than Scorsese’s other work, but I think that’s intentional on the part of the aging auteur.

Indeed, I generally associate this director with audacious camerawork and fast, violent plotting — as in, for example, “Taxi Driver” and “The Departed.” But in this film, he proves himself once and for all an actor’s director, with long subtle takes on two or three men — and dialog that can seem banal on the surface, since no one will say what they actually feel.

It’s this quality of concealment that keeps the film compelling, together with a phenomenal soundtrack of era-appropriate tunes — plus the director’s usual meticulous period detail. Some of the shots here must have cost a fortune.

And that includes the much-discussed “de-aging” technology. This enables the three leads to look much younger in earlier scenes, as the film flashes back to the forties, then moves forward toward Hoffa’s disappearance in 1975.

Truth to tell, this de-aging is a bit distracting — there’s sometimes a bit of a Botox effect; in particular, the colorization of De Niro’s eyes from brown to blue almost never works. I’m not the only viewer who found this intensely distracting.

The three leads are strong … but, except for an excellent Harvey Keitel, it’s the younger, lesser-known actors who show up with that well-known Scorsese scariness — the knife-edge unpredictability that makes a heady mix of dread and “can’t-look-away.” Watch especially for Stephen Graham as “Tony Pro” and Sebastian Maniscalco as Crazy Joe Gallo.

Except for their scenes and a few others, “The Irishman” is tamer Scorsese. As such, it makes a sobering companion to his earlier attention-grabbers — films like “Casino” and “GoodFellas,” for example, which certainly make crime look cool enough, if not always smart.

“The Irishman” never feels that way. Especially in its final half-hour, and in the subtitles that pervasively announce the characters’ fate, Scorsese and Zaillian repeatedly insist that this way of life leads to nothing but loss and death and devastation.

It’s not quite a rich enough message for the movie’s massive length, but “The Irishman” does offer several great scenes, highlighted by the Florida meeting between Hoffa and Tony Pro — a masterpiece of writing and acting.

In any case, no analysis of Scorsese’s oeuvre can be complete without this late-career entry.